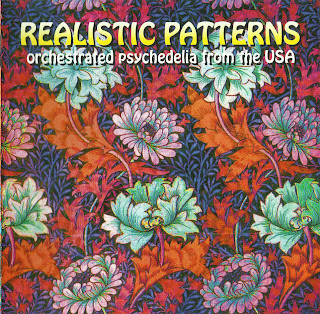 Over the past several years, smaller niche markets have started to become more DIY oriented as the bigger label support crumbling beneath their feet. Among the genres most notably contributing to the niche are soul/R&B, funk, jazz, and the enormous number of psychedelic nugget compilations. With so many reissue labels and compilations floating around, it’s hard to decipher which ones are actually worth the high price tags that smaller labels are forced to charge.

It all comes down to the compiler and the staff’s passion behind these labels—we’ve all learned that Numero dig up some of the tastiest nuggets, Soul Jazz create some of the best retrospective period compilations in the business, and you can always turn to Trunk for the sounds that are from another planet. It usually only takes one release to make or break these labels, and after a solid couple dozen releases on Psychic Circle, they may have finally laid their permanent mark with Realistic Patterns: Orchestrated Psychedelia from the USA.

As mentioned, one of the most important elements in reissue labels are the compilers and the heads of the labels themselves, and Psychic Circle has one of the better teams behind the drawing board. The label is owned by Steven Carr (one owner of Radioactive) and the compiler is Nick Saloman, lead man of ‘60s psych-revivalists the Bevis Frond. Finding a topic to keep an audience interested in buying a compilation from a semi-obscure label is the true test—and orchestrated psychedelia is by and large the cleverest release from Pyschic Circle yet.

Ochestrated psychedelic cuts were usually those in the ‘60s that got thrown to the wayside as cheap b-sides or corny off-shoots from respectable bands. Saloman proves that something other than fuzzy guitars and pummeling drums can fit within the pallet of psychedelia, and he does it with the help of 20 bands that understood quality arrangements. Featuring artists ranging from the unknown to the obscure collector all the way to deep cuts by bands like the Moon—which featured Matthew Moore (who worked with Leon Russell and Joe Cocker) and former Beach Boy David Marks—the attention to detail in the compiling of tracks for Realistic Patterns is imposing and laudable.

While some cuts, such as Burned’s “All Those Who Enter Here”, which was released on a temporary subsidiary of Mercury, and Bubble’s “I Call Her Lady” on Dot Records (both released as one-off 45s only), are nearly unknown to any normal record collector, there are cuts that will prove to familiar to the everyday psych-collector. Present is one of the best examples of orchestrated psychedelia, the 31st of February’s classic baroque-style cut “Pedestals”, which features future Allman Butch Trucks behind the kit (Greg and Duane were also known to sit in with the band), while Tim Widle’s “Popcorn Double Feature” provides the original of the Searchers’ smash hit, written by Larry Weiss (also responsible for “Rhinestone Cowboy”—quite the change of pace).

Realistic Patterns does follow suit to a nagging trend in obscure compilations, and that is a lack of research. While folks like Numero have gained their recognition for the deep research put into the tracks they compile (the backstories contained in the liner notes are often just as interesting as the tracks), Psychic Circle is willing to put out a track they can find little to no information on. It can only make one wonder if they really put the time into doing deep research to find the info. For example, the liner notes behind the track “I Had the Notion” by the Sound Solution claims, “Well, here’s a great track from a clearly excellent band, and I could find absolutely nothing about them.”

But if these backstories and discoveries are part of the reason people buy these compilations, then how are they clearly excellent? This isn’t to shortchange the effort put into Psychic Circle’s compilations, but more extensive research for the liner notes would be a definite encouragement for purchasing these comps in the future. While Realistic Patterns: Orchestrated Psychedelia from the USA has its commonplace flaws, it’s strength of track selections and precise compiling should leave Psychic Circle as a go to label for tracks that are obscure, but also full of substance.

Steven Carr and Nick Saloman have built the right foundations for a fantastic adventure into the world of compilations, and if they continue to grow, there is no doubt they will find themselves a place in the niche of ever-growing DIY compilation labels.
by John Bohannon 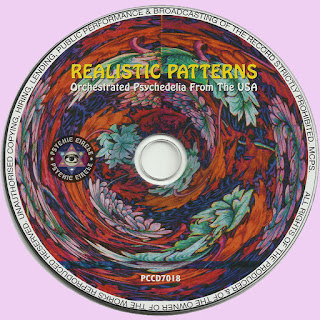 For DanP and all of my FRIENDS who supporting our effort for more than three years....

Thank you Marios for all your efforts over the years, this will be another great comp.

Aww shucks Marios, what did I do to deserve that shout-out! Thank you so much! Thanks for your work here. Obviously I love the blog.

As for this post, well, I've taken note of the existenc of this collection before and really wondered what is sounds like. Here's my chance to find out...thanks again! xoxoxo

DanP,
it was the right time, it was your request and I took the chance to express my gratitude because I feel I can share with you the music we all love.

Thank You VERY MUCH Marios !! Great !

First of all this is not a slam on your blog, in fact I love your blog very much. But for as long as this takes to download, I might as well get in my car and go buy it at the local record shop or order it online, either way I will get it quicker than waiting for this pig to download. Thanks anyhow.

Thanks a lot Marios for all of your work, you're a preacher for good music.

Your work over the years, always characterized by good quality and your good taste .... just as you wrote my friend Laurent .. "You're a preacher for good music."
I appreciate your efforts more than words can express....
Marios.... Many thanks!

Hey Marios, thanks again! Now I vaguely recall requesting this one! You have the memory of an elephant! I mean that in a very good way!

Thank you for all your hard work over the years and for this fine collection! Cheers, Marios!

I wonder what would life be without Rockasteria?! Many thanks, Marios!

Well, as music goes this is something unobtrusive, low profile even if you're expecting something 'great' or challenging. Nothing of the kind but easy, sincere feelin' on each of the songs that make this great compilation. Great vibes indeed, good stuff to get you in a hopeful, shining mood.

PS: Thanks a lot for saving my life, once again! :)

Thanks for this one Marios, I'm glad you have a premium accnt. with DepositFiles, otherwise this post would be dead!

According to the link it seems that free text host is now Suspended.