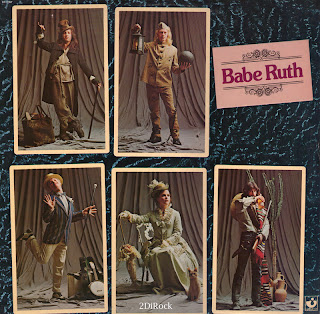 Progressive rock unit Babe Ruth was formed in Hertfordshire, England in 1971 by singer Janita "Jenny" Haan, guitarist Alan Shacklock (whose surname lent the group their original moniker), and bassist Dave Hewitt. Pianist Dave Punshon and drummer Dick Powell joined the lineup prior to the 1971 release of Babe Ruth's debut single, "Elusive"; the 1972 LP, First Base -- which credited the explosive Haan with "vocal power" -- generated the group's best-known song, the Shacklock-penned "Wells Fargo," and despite limited interest at home, the album earned a following on North American shores, going gold in Canada.

Drummer Ed Spevock replaced Powell for the follow-up, 1973's Amar Caballero, while ex-Wild Turkey keyboardist Steve Gurl assumed Punshon's duties for Babe Ruth's self-titled third effort; the most pivotal blow, however, was the subsequent exit of Shacklock, with another Wild Turkey alum, guitarist Bernie Marsden, signing on for 1975's Stealin' Home. Though the album seemed poised to finally push the group into the British mainstream, Haan and Hewitt both resigned; singer Ellie Hope and bassist Ray Knott were tapped for 1976's Kid's Stuff, but without a single founding member remaining in the lineup, Babe Ruth disbanded months later.

Their self-titled release came out on 1975 and shows them branching out of the progressive rock style of earlier discs and adding touches of soul, folk, and movie theme music to their muses. With covers from  Curtis Mayfield's "We People Darker Than Blue" and Morricone's "A Fistful of Dollars," Babe Ruth  show their willingness to diversify from earlier days.
by Jason Ankeny and James Chrispell 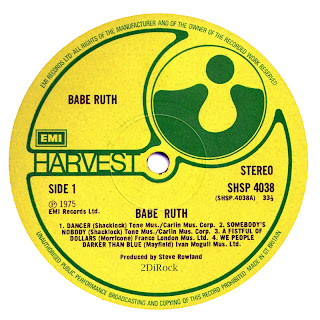 On Harvest, tho' I was always more of an Island fan really, so this passed me by at the time.... time to be 21 again! Thanks very much!

thank you very much for rare vinyl. Band is the great

Please re-up...
Many thanks Marios.