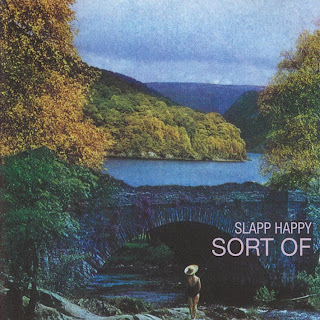 Slapp Happy is the most favorite band of mine. Finally, I start writing about them. I could not write about them until now because I was anxious if I can write well. (My love for them is so strong!) And there are already good sites about Slapp Happy and Dagmar Krause. I was not sure if I can write something new; I am still not sure about it. But it may be better writing something than not writing anything.

Slapp Happy is made of three persons. No one can substitute members. They are Dagmar Krause (Henry Cow), Anthony Moore (Henry Cow), and Peter Blegvad (Henry Cow, The Lodge). Pre-history of Slapp Happy started with the episode of Anthony Moore. British born Moore contracted with German Polydor, and released two albums and recorded one more album, which was refused to be released. They are very avant-garde, experimental, Dadaistic, non-sense, fake minimalism music, produced by Uwe Nettlebeck, who also produced Faust. Naturally, these two albums didn't sell at all. So, Polydor demanded more pop and commercial album to Moore.

Then, Moore and his American friend Peter Blegvad started to play more pop music. German born Dagmar Krause, the girl friend of Moore, used to be the member of German soft rock band, the City Preachers. But she couldn't sing at that time because of the voice problem. According to Belgvad, which can be a joke, because Belgvad's singing was too bad, Krause started to sing suddenly and took a vocal part of the band. This is the story of how Slapp Happy was started.

This debut album was also produced by Uwe Nettlebeck and backed with Faust members. Dagmar Krause's singing is very pure and innocent, it kills me. The songs are simple and primitive pop. Naive rock, according to Peter Blegvad. Particularly, I love the songs Krause sang, Blue Flower, I'm All Alone, Who's Gonna Help Me Now, Small Hands of Stone, Heading for Kyoto. On the other hand, songs Peter Blegvad sang, Paradise Express, I Got Evil, Tutankhamun, Mono Plane, are not very good. His singing was not so good at that time. (His singing improved much in his post-Slapp Happy solo albums.) Title tune, Sort of, is the strange guitar instrumental like the Ventures.

When this album was re-issued by ReR in 1981, it was with one-sided bonus single Alcohol . It is a Belgvad's out-take song probably recorded in 1974. Sort Of was out of print for a long time, but it was re-released as a CD in 1999. This CD version includes the bonus track Jumping Jonah, the B-side of the single, Just a Conversation.
AirStructures" 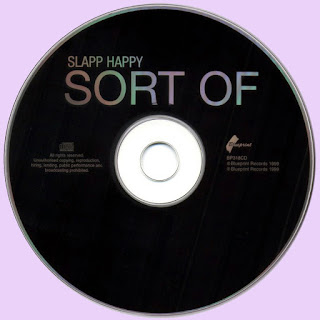