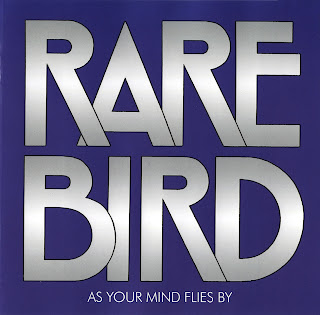 Rare Bird's second album "As Your Mind Flies By" turned out to be their classic release. It's stuffed with a great 70's atmosphere and flawless songwriting. All the 5 tracks on the album are impressivly strong. "What You Want to Know" and "I'm Thinking" are melodic, organ-driven, early 70's progressive rock at its best.

The arrangements have lots of cool, twisted and varied organ-sounds and the vocals are great. The rest of side one is made up of the short, baroque-influenced "Down on the Floor" and the great, heavy-progressive "Hammerhead". The second side consists of the 20-minute "Flight". This is one of those tracks that will make any fan of 70's progressive rock cry of joy.

The first part of it is quite dramatic and classical-influenced, then it goes into a great jamming part with a choir and excellent duels between the organ playing of Graham Field and the twisted el-piano of Dave Kaffinetti. The two last parts of the track are energetic and heavy with the most perfect organ-sounds you can imagine. With no doubt one of the best progressive rock albums from 1970. By the way, the single-release of "What You Want to Know" had a very different arrangement from the album-version.
Vintage-Prog 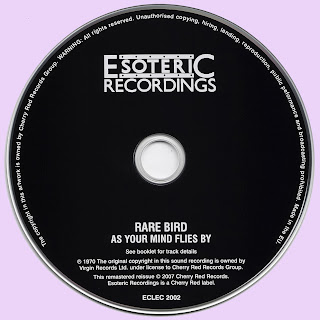 A classic album ! Thanks very much for this expanded edition...

Terrific stuff, probably my favorite of the Rare Bird material and I think many would agree.

I really like the Esoteric remasters. Thank you Marios.

thank you for sharing this album

Tony Stratton-Smith’s Charisma Records signed many innovative bands in the late sixties. Van der Graaf Generator, The Nice, were just a few of them. Rare Bird sure wasted no time in getting some music recorded. They formed in October 1969 and already had an album out within two months of their formation! Apparently Tony Stratton-Smith (head of the then-newly established Charisma Records) was so impressed by the band's demo tape that it essentially became their album.

The main structure of the classic rock bands is rhythm section consisting of drummer and bass guitarist . On the front of the lead guitarist reigns . Such standard power trio is sometimes expanded version of the second guitar lead guitarist . The best example of such a group is Wishbone Ash . Extreme variant of the construction of the rock group is to change the front guitars keyboards . Sometimes two or even three . As with the Rare Bird and its brilliant plate of 1970- it was - As Your Mind Flies By. Organist Graham Field and electric pianist - David Kaffinetti - reinforced the fact there another organist - Kevin Lamb .

Group of Rare Bird in his music for the first two records went in the direction indicated by Procol Harum group and part of The Nice . So giving up the guitar. Although Procol Harum guitar was present , and sometimes played a very important role , it is about the wording of that team decided dignified tones Hammond organ and piano. It was the same for Rare Bird . All kinds of keyboards ( Hammond organ , electric piano , etc. ) decided the climate of the music performed . It turned out that in such a configuration was not necessary guitar . Enough beautiful, full of feeling and sense of performance and good compositions .

Career group you need to part thick line in two stages. First , it is recorded in the original composition of the first two titles . The second stage , the remaining three albums already recorded in strongly altered composition . In my view, these steps are more that unites than divides . The first two albums are stylistically different story than another make. She left a total thing of beauty and over. Fantastic , instrumental passages , poignant vocals , alternately sharp and severe organ depnięcie with mild registers sound . Climate from pop to heavy organ rock music . There are those who believe the record for the best progressive album of all time. Anyway - Emerson Lake and Palmer, Yes and Nice have a serious partner .

Thus, already on the first record the band has developed his early style , while ' As Your Mind Flies By' Rare Bird tried to just develop it . And everything would be great if not for the fact that after recording the second album, the group left the Graham Field and Mark Ashton. Too bad , because I think that the first part could still do a lot. Besides, what extremely important , both the band and the music , it was pure magic . Unfortunately, both LP sold quite poorly,therefore soon a split occurred.

Their keyboard rich music helped pave the way for many of the most successful progressive rock bands of the seventies. Ironically, they enjoyed better recognition across Europe remaining a somewhat overlooked gem in their homeland.

It has now been re-issued on the Esoteric Recordings label who specialise in helping keep classic albums from being overlooked by later generations. Rare Bird is undoubtedly a fine debut. Further albums followed with 1970’s As Your Mind Flies By, Epic Forest in 1972, 1973’s Somebody’s Watching, and Born Again the following year.

Turning to the merits, ie the contents of the second album Rare Bird "Your Mind Flies By", it should first be noted that this album is a progressive rock with dominant roles organs, although the wording of the subordination of the keys would only reign of injustice. Without Gould, a great bassist and a charismatic singer and Ashton, who sits behind a set of drums, a legend Rare Bird had never seen the light of day.

''As Your Mind Flies By'' get one of unjustly forgotten diamonds of the British progressive rock from where the magnificent keys sound of the two keyboard players can rise to epic proportions, which culminates "Bolero"-quote in fulminant and is supported by an operatic choir singing in the background. In the somewhat bluesy vocals Rare Bird somewhat reminiscent of the Colosseum.

The opener, slow, quiet, "What You Want To Know", begins as organ ballad with a beautiful melody. The action takes place on three levels, pearling a celebrity vocal, viscous and dense organ and the rhythm of the prevailing party drums. After 1:20 the song is gaining momentum and momentum going into phrases much more dynamic. In this passage draws attention to an incredibly expansive sound offensive duo of keys and organs. After a moment, the acceleration appears nostalgic slow down, after which the composition enters the second phase, psychedelic (about 4 minutes), in which the organ passages give the impression of the solo guitar, although it is of course an illusion. But who chooses to listen to, this probably admit I was right, that organ expression mimics perfectly the guitar sounds. The whole echoes a bit old-fashioned, but it certainly is not a reason to complain about class band.

The second act is called "Down On The Floor" and despite the fact that due to the duration, you can treat it as a form of spacer, brings a lot to the characteristics of the album. Developed in the climate of the Baroque, with in relief the role of "Bach" organ and party quite nierockowego instrument which is klawinet. The central feature of the composition is heavily scratched base in the form of so-called harmonic. basso continuo (bass digital). This task was used bodies and klawinet, or instruments to play chords. An important factor is climate clearly indicating early music, which aptly combined emotionality, simplicity and grandeur.
Item number three is called Hammerhead ", a total contrast compared to its predecessor. Despite the lack of a guitar track is a classic hard rock, incredible dynamics, condensed space dynamic and energetic attitude bodies section.

Uploaded at the end of side A traditional black vinyl "I'm Thinking" with solemn, hymn explosion organ has a large diversity scale dynamics of peace and quiet after a dramatic bursts of sound. Vocal Gould coming up in many places to scream, shaping his party fine tune, and on the "throne" sit invariably Hammondy.

I think that Rare Bird did not address any spectacular success, despite the fact that their art bears the mark of the highest quality. Years go by, and this excellent album "As Your Mind Flies By" still belongs to the rock aristocracy. 37 and a half minutes of rock feast, with the same delicacies, innovative solutions, the power of sound and perfection executive, is undoubtedly an ambitious rock music canon,based their music on a bit of marching rhythms and kept in a climate of music by JS Bach's mighty Hammond organ chords plus a little jazz electric piano parts. As for me, lick your fingers!