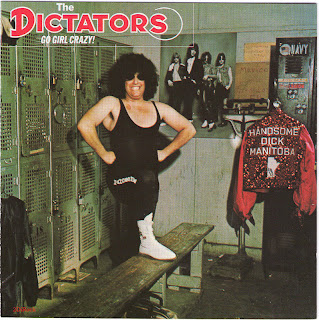 In 1975, when punk rock and heavy metal were two opposing camps who barely who acknowledged each other's existence,  The Dictators' first album, Go Girl Crazy!, found New York's finest trying to bring both sides together in a brave,  prescient, and (at least at the time) futile gesture.

The band's "smart guys who like dumb stuff" humor,  junk-culture reference points, and '60s cheeze rock covers ("California Sun" and "I Got You Babe" on one album)  would seem tailor made for the crowd at CBGB digging the Ramones and the Dead Boys,  but their sludgy and stripped down hard rock (and Ross "The Boss" Funichello's neo-metal guitar solos)  were something else altogether. And at a time when the arena rock audience had not yet embraced the less-than-subtle humor  and theatrics of Sparks or Cheap Trick, the Dictators' ahead-of-their-time enthusiasm for wrestling,

White Castle hamburgers, and television confused more kids than it converted. Heard today, the album is a hoot and a half;  if the tempos could often stand to be a bit livelier, Adny Shernoff's songs are still great  (especially the absurdly anthemic "Two Tub Man," "I Live for Cars and Girls," and "Weekend"),  the jokes still register (while the contemporary Political Correctness brigade might blanch at "Back to Africa"  or "Master Race Rock," they're merely absurd in the Mad Magazine tradition),  and "secret weapon" Handsome Dick Manitoba was truly a find.

Dozens of groups borrowed wholesale from Go Girl Crazy!  later on down the line, but the original is still the greatest ... and the funniest
by Mark Deming 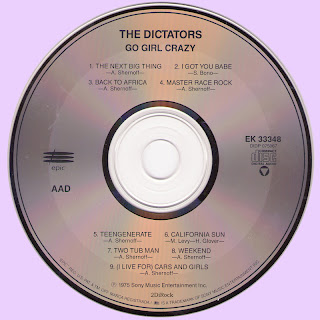 Free Text
Free Text II
Posted by Marios at 8:24 AM

One of my all time favorites!