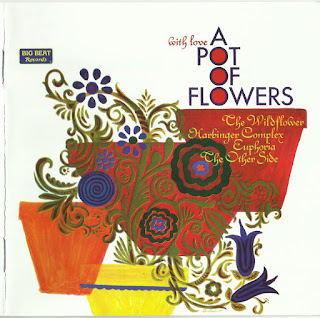 “With Love: A Pot Of Flowers” was originally issued in late 1967 by Mainstream Records. It is testament to the quality of the groups and songs included, not to mention the A&R proclivities of Mainstream head honcho Bob Shad – as irascibly indefatigable as anyone you might choose in the hothouse atmosphere of the independent record business of that era – that the album plays so well and, if you’ll pardon the pun, really grows on you. That in hindsight it also plucked four bands from within the vortex of 1966 nascent psychedelia and places them in a historically fascinating context, is equally remarkable. This expanded version of “A Pot Of Flowers” includes additional material by other relevant groups released on Brent or Mainstream from 1965 to 1967, as well as the mono single mixes of selected tracks from the album and some unreleased cuts.

The collection was amongst the first of a swathe of rock albums that Mainstream issued towards the end of the 1960s, the result of a remarkable A&R odyssey conducted by Shad across the United States, in much the same fashion as the location recording expeditions the producer had made to the south in the late 1940s in search of blues and R&B acts. Whether by luck or design, Shad decided to make one of his first ports of call San Francisco, which in early 1966 was well into the honeymoon period of its own socio-cultural renaissance, with the entire Bay Area awash with rock’n’rollers of all shapes and sizes.

As our extensive liner note details, he had initially issued several unsuccessful singles by Bay Area groups on both Mainstream and Brent, but by subsequently collecting the best of these together on “A Pot Of Flowers” he unwittingly created one of the more satisfying surveys of the scene at the time. The acts in question were the Wildflower, pioneering folk-rockers who were an early fixture at the Fillmore and Avalon; San Jose’s popular garage band the Otherside; legendary East Bay punks the Harbinger Complex; and, from southern California via Texas, the idiosyncratic Euphoria, whose pathfinding, off-beat take on psychedelia has given the group a cult reputation.

The bonus material included on this Big Beat reissue doubles the track list of “A Pot Of Flowers” y adding appropriate folk-rock and proto-psych sides from other West Coast acts on Mainstream such as the New Dawn, the Word, the Ariel and Thee Unusuals, the latter a Northwest group featuring blue-eyed chanteuse Kathi McDonald, who would later to take Janis’ spot in Big Brother & the Holding Company (who were also signed by Bob Shad during his California sorties). We are also proud to include several stellar unissued garage rockers from the Ban and the Montells, as well as the original mono singles mixes of selected tunes.
by Alec Palao 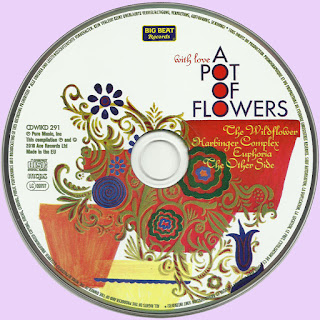