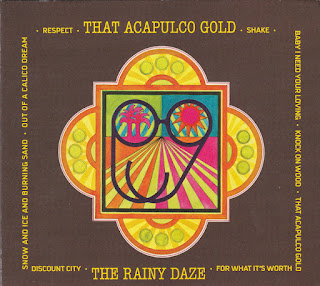 A Denver, Colorado band, the Rainy Daze came together in 1965 and gleaned an admirable reputation locally, leading to signing a deal with Chicory Records late in 1966. The band’s first single, “That Acapulco Gold,” was penned by their singer and guitarist Tim Gilbert, along with his college roommate John Carter.
Directed by jolly tap-dancing rhythms and swarms of sunny choruses, “That Acapulco Gold” sounded like something straight out of the Lovin’ Spoonful songbook. Receiving an impressive amount of regional airplay, the perky little vaudeville-flavored ditty was quickly picked up by the Uni label for national distribution.
Shortly after “That Acapulco Gold” started to gain traction, conservative radio programmers pulled the plug due to the fact the song was about heading south to score marijuana in the hopes of curing sniffles and sneezes. The track stalled at No. 70 early in 1967, and the Rainy Daze sadly never again acquired much success.
The flip side of “That Acapulco Gold” was further composed by John Carter and Tim Gilbert. Cast of trippy lyrics regarding listening to leaves caress the ground and clocks with no hands, “In My Mind Lives a Forest” proved to be a potent piece of acid-scented matter. Distorted guitars set the pace, compounded by clipped vocals, a bruising break, haunting vibes, and concluding to an explosion of rumbling feedback.
Both “That Acapulco Gold” and “In My Mind Lives a Forest” were included on the Rainy Daze’s only album, also titled That Acapulco Gold. Containing a nice mix of pop and psychedelic elements, the disc was quite good, and in hindsight is comparable to select moments of the Electric Prunes and the Stained Glass.
Although “That Acapulco Gold” died an unforgivable death, Tim Gilbert and John Carter continued to write songs and reaped riches in the fall of 1967 when their wiggy and wonderful, “Incense and Peppermints” – recorded by the Strawberry Alarm Clock – transpired into a No. 1 hit.
by Beverly Paterson 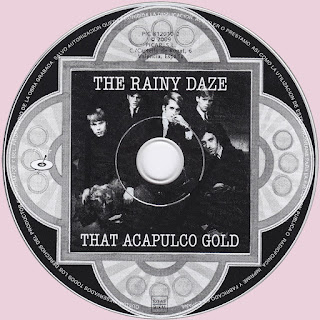 Thanks for the Rainy Daze recording!

Been looking for this for some time. Thanks again, Marios!

This is a nice transfer.

I've downloaded several versions of this over the years upgrading as and when a better version becomes available. There many online that purport to be Lossless FLAC but turn out to be mp3 sourced. I'm pleased to say, this is not a lossy source and becomes my new "best".

Thank you for posting