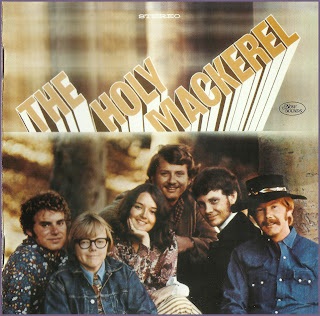 If ever an album was lost in the shuffle, it was the 1968 debut LP by The Holy Mackerel. The LP, assigned as Reprise 6311, fell smack in between Jimi Hendrix’s Electric Ladyland (Reprise 6307) and Neil Young’s eponymous solo debut (Reprise 6317). But adventurous listeners would find themselves rewarded if they picked up the album by the oddly-named group, with its cover sleeve of five gents and a lady smiling for the camera under three-dimensional comic book-style lettering proclaiming them “The Holy Mackerel.” Produced by an emerging Richard Perry, The Holy Mackerel might as well have been called Something for Everyone.

Over the course of 12 tracks, the group traversed psychedelia, country rock and best of all, sunshine pop with the terrifically infectious “Bitter Honey,” co-written by Paul and Roger Nichols. Of course, the Nichols/Williams team would go on to become a Los Angeles-based hitmaking factory, turning out some of the most-loved songs of all time: “We’ve Only Just Begun,” “Rainy Days and Mondays,” “I Won’t Last a Day Without You.” They also wrote some tunes which are not-so-well-known but no less wonderful: “The Drifter,” “Someday Man,” “Trust.” Cherry Red and producer Steve Stanley on September 27 will give The Holy Mackerel the deluxe Now Sounds treatment with an expanded reissue, appending a whopping 10 bonus tracks to the original 12-track LP, including 9 songs new to CD and 5 previously unissued in any form. Click on the jump for more background on The Holy Mackerel, one of this author’s favorite lost LPs of the era, and the full track listing for the Now Sounds reissue with pre-order link!

The Holy Mackerel originally consisted of Paul Williams, brother Mentor Williams (who would go on to write Dobie Gray’s much-covered smash “Drift Away”), Bob Harvey (late of Jefferson Airplane), guitarist George Hiller, flautist/vocalist Cynthia Fitzpatrick and Don Murray, formerly of the Turtles. Perhaps not boding well for the album, the lineup changed before the LP was ever released. Harvey was replaced by a name soon to be familiar to Elvis Presley’s fans, bassist Jerry Scheff; Don Murray was replaced by Michael Cannon. In the liner notes to Collector’s Choice’s 2005 CD reissue (CCM-543-2), Steve Stanley indicates that Buffalo Springfield’s Dewey Martin also contributed drums to the Mackerel’s LP; the Springfield influence was clear on country-flecked tracks like “The Somewhere In Arizona at 4:30 A.M. Restaurant Song (And Now I Am Alone).” The album’s eclectic nature may have hurt its initial reception, but it’s filled with the sounds of young artists at their hungriest and most imaginative.

Despite the album’s commercial failure and the band’s dissolution, its reputation remained strong over the years. Lead singer and songwriter Paul Williams went on to create his underrated solo debut Someday Man, wholly written by the Nichols/Williams team and produced by Nichols, and then to even greater fame. Andrew Sandoval revisited two of the LP’s tracks, “Scorpio Red” and “Wildflowers,” for Come to the Sunshine: Soft Pop Nuggets from the WEA Vaults (Rhino Handmade RHM2 7818) and Hallucinations: Psychedelic Pop Nuggets from the WEA Vaults (Rhino Handmade RHM2 7821), respectively. Steve Stanley has more than done his part in keeping the Williams/Nichols partnership in the spotlight, spearheading Collector’s Choice’s reissues of The Holy Mackerel and Someday Man, and via Rev-Ola and Now Sounds, reissuing the complete output of Roger Nichols and the Small Circle of Friends as well. (If you’re still reading this far and don’t have both Roger Nichols albums, along with Someday Man, stop now and order immediately! You won’t regret it.)

Now Sounds’ edition boasts non-LP single tracks “Love for Everyone” and “To Put Up With You,” one of the most delicious put-down songs ever, with Williams’ pointed lyrics directed at a heartbreaking if attractive lady: “Yes, I’d like to hang around/But I’ll have to let you down/I just haven’t got what it takes/To put up with you…” set to a breezy Nichols melody. “Scorpio Red” and “The Lady is Waiting” are heard in their mono 45 versions, joined by session outtakes and demos, including a demo of “Bitter Honey,” memorably covered by Jackie DeShannon on her Laurel Canyon LP.
by Joe Marchese 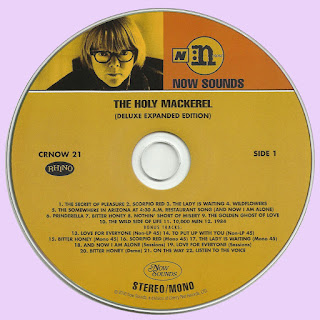 The Holy Mackerel's sole album garnered little notice upon its initial release in 1968, and is mostly known today for including Paul Williams, who wrote most of the material (sometimes with Roger Nichols), taking the majority of the lead vocals. There were other noted figures involved in the LP as well, although the group's lineup fluctuated during its recording: Richard Perry produced, brother Mentor Williams played rhythm guitar and took some lead vocals, original Jefferson Airplane bassist Bob Harvey (who left before the record was finished) wrote one song, and future Elvis Presley side man Jerry Scheff plays bass on one track. It's a largely likable album, if mild-mannered, erratic, and lacking the heavyweight hooks of Williams' famous hits. The best tunes are those that play up the most melodies the Mamas and the Papas-ish folk-rock harmonies, such as "The Secret of Pleasure," "Scorpio Red," "The Golden Ghost of Love," and "1984." The most psychedelic song, "Wild flowers"[in 2010 deluxe expanded reissue bonus tracks Those bonus tracks include the non-LP single "Love for Everyone"/"To Put Up with You," which are similar in quality and tone to much of the album, if perhaps a bit more pop-oriented; Williams would redo "To Put Up with You" for his 1970 solo debut LP. There are also mono 45 versions of three of tracks; the nice Simon & Garfunkel-like outtake "Listen to the Voice," co-written by Harvey and lead guitarist George Hiller; a Williams-penned outtake, "On the Way," and a demo of one of the LP's songs, "Bitter Honey." Capping the bonus material are largely instrumental
That is quite likely to be your exclamation when you hear how good this record is! The Holy Mackerel was a loosely shifting organization (early Jefferson Airplane bassist Bob Harvey and Buffalo Springfield drummer Dewey Martin were among its members) at whose center was Paul Williams’ songwriting, which travelled in pop, country and psychedelic directions with the help of future platinum producer Richard Perry.
The result is a record that should have sold a lot more copies than it did; the band broke up right after its release and Reprise didn’t promote it, but be sure to catch it this time around. Includes "The Secret of Pleasure," "Scorpio Red," "Wildflowers," "The Somewhere in Arizona at 4:30 A.M. Restaurant Song (and Now I Am Alone)," "Prinderella," "Bitter Honey," "Nothin’ Short of Misery," "The Golden Ghost of Love," "The Wild Side of Life," "10,000 Men," and "1984." From 1968.
Many thanks to Marios for this post, phenomenal album, enriched by the premie!

Thanks for this ... any chance you might have the expanded version of Paul Williams' "Someday Man" album?

Please indicate that you have posted 2 part files with different file names (on mirrored link) and that the downloader should change into same file names for proper extraction. Thanks

This is one of my all time favorites.
A terrific album indeed.
Thanks for posting this jewel Marios.

Marvelous! Many thanks Marios for sharing this extended release!

Thank you very much. Didn't know them, tried them and like them a lot!