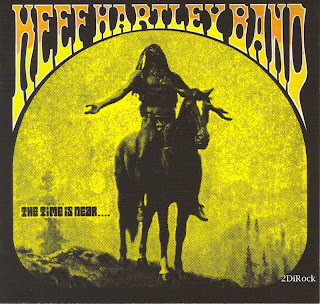 The core of Keef Hartley Band, along with Hartley and guitarist/vocalist Miller Anderson, was bassist Gary Thain. He was heavily influenced by bassist Duck Dunn from Booker T. and the MGs but, like Anderson and Hartley, possessed a clearer jazz spirit. The Time is Near... features a number of different horn and keyboard players, with its line-up settling down considerably for Overdog.

If Overdog is generally heavy, The Time is Near... is a lighter affair, with Anderson found on acoustic guitar as often as electric and songs like "Morning Rain sounding almost schizophrenic. Opening with a psychedelic reverse-attack collage of drums and horns, it's a song whose changes could find a place in the repertoire of roots rockers The Band if it weren't for Thain's funky bass line and trumpeter Henry Lowther's soul-drenched horn arrangement. "From The Window could easily have come from Motown, but the shifting tempo and more complex horn parts that ultimately resolve into a sunnier, ambling groove are indicative of greater depth and complexity.

Keef Hartley Band may not have been considered a progressive rock group by connotation, but its combination of soul, jazz, rock and folk here are progressive by stricter definition. Hartley was fortunate to find Miller, who writes all but one song on The Time Is Near.... Possessing enough grit to deliver the stronger message of the nearly ten-minute title track but equally capable of carrying the gentler classical guitar/trumpet duo of "Another Time Another Place," his voice is so versatile that these two tracks almost sound as if they're being sung by different people.

An equally versatile guitarist, he delivers a gritty, blues-drenched solo on the title track and the final part of "You Can't Take It With You, which also features a blistering saxophone solo from Lyle Jenkins during its lithely swinging 6/8 middle section. The only non-Miller track on the disc is "Premonition, an instrumental by trumpeter Dave Caswell, another fine player who seems to have disappeared without a trace. It's essentially a light two-chord vamp with a brief chorus that paves the way for strong solos from both Caswell and Jenkins.

The rhythm section team of Hartley and Thain powers the material throughout. It's hard to judge which of these two reissues is a better record since they're both so different (while remarkably still managing to sound like the same group), but The Time Is Near... gets a subtle nod for its broader mix of styles and a group sound that's as distinctive as its American counterparts, while feeling less like a group looking for a hit. Instead, Keef Hartley Band seems to have hoped that the audience would come to it, and while it had its brief moment in the spotlight, there's no musical reason why it should have been less successful than Chicago or BS&T other than the fact that it never got the international promotion it deserved.
by John Kelman 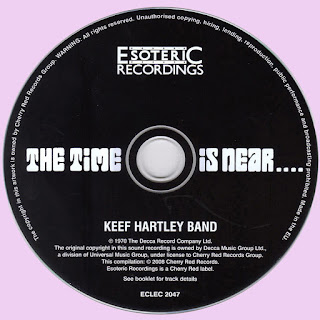 Free Text
Text Host
Posted by Marios at 6:34 AM

Thanks for bringing so much Keef Hartley music to my attention, Marios. Much appreciated.
I'm listening to the sample now, it starts a really great groove around the 2 minute mark. Fantastic!

The KHB album that had previously always eluded me - big big thanks for resolving that Marios!

Thanks very much for this great addition to the K.H. discography...

Have this one, thx. Gary Thain moved later to Uriah and became the member of their best line-up.
Music history at its best.
Thx and have a nice weekend.

THANKS! IT,S THE BEST ALBUM OF KEEF, I THINK/

thank you for this!

Please will you make this album available again ?

As always thank you in advance Marios.

Thanks a million for being so prompt in uploading this again Marios.

As always, I appreciate the FLAC version as well.

The best of health to you, and peace of mind and contentment.

Keef Hartley Band - The Time Is Near ...Repaired...