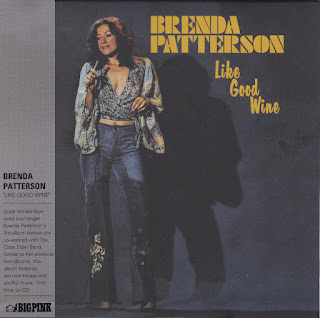 Brenda Patterson has a fantastic voice, a Memphis based blues rock singer recorded three albums in early 70’s.“Like Good Wine” was her third, released in 1974 on Discreet Records, a label owned in part by Frank Zappa, you'd think that this was going to be a rock album as well as her two previous, well not exactly. Produced by Snuff Garrett, who was also Cher's producer at the time, in the early 70's, but the formula he worked out for Cher did not do Brenda Patterson justice, he gave her soft production, with backing vocalists and strings.
Couple of songs were written by John Durrill (who also worked with Cher), but the best songs are Bill Anderson's “Slippin' Away” a nice upbeat, Ray Price's “I'll Be There  (If You Ever Want Me)”, which illustrates the power of Brenda's voice best as she sings accapella on several lines, and probably the best song here “Sweet Amarillo”, first surfacing as a short jam on the outtakes of  Dylan’s 1973 Pat Garrett & Billy the Kid sessions, the song was completed a year later by songwriter Donna Weiss, the impromptu track on Dylan’s session was polished for pop splendor with a faster beat, a catchy hook, and a bell-bottom clad Patterson singing “Sweet Amarillo/ You stole my pillow/ You stole my pillow/ Hun, you ruined my mind/ Sweet Amarillo/ Like the wind and the willow/ I never will know/ Just how much you lied.”
The album has some good cuts, but it's very short, with the songs all running around 2 and 3 minutes. Thankfully, she would continue to record, joining The Coon Elder Band. 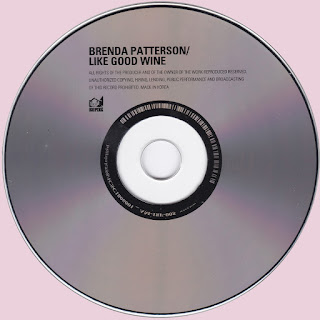