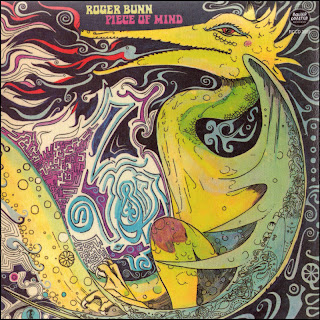 Nowadays we're all fans. Or at least we're told we should be. We need to be entertained and demand new familiar or not-so-familiar sounds to satisfy our consumer instinct. For many, music is more about selling and buying than creating. Looking back at "psych" music we can check any number of musical commodities and ask ourselves, "Was it pop with ornamentation or something heavier and far-out?" In our disposable age it's hard to see the effect that an album could have artistically, especially in retrospect.

Bands now are happy to ape each other with ironic glee or frustration for a time when pop music seemed very important. The frustration also seems to be with the overwhelming entertainment directive that guides so many of our lives.

But in 1969 Roger Bunn put together "stream-of-consciousness" words with jazz rhythms and acid-psych, punctuated by the occasional James Brown horns, to make a unique album. How many albums, even in the sixties, captured the real sense of unknown territory evident in Ken Kesey's "Merry Pranksters" bus rides?

All through "Piece of Mind" we hear songs that have the same mythic sense of exploration that was about more than fashion and drug use. The need to entertain is certainly not just a new phenomenon. Even the Beatles "Magical Mystery Tour" seems pulled between the demands of well-crafted radio-friendly pop expectations and the sense of abandon and new territory suggested by psychedelia.

They pull it off pretty well of course (as they tended to do), but one could argue that this split between commercial expectation and artistic development is really what broke up the Beatles in the end. "Magical Mystery Tour" (the film anyway) certainly didn't go down very well at the time, and it seemed to be a possible sign of self-indulgence. But maybe in retrospect we can see that it was just a sign of the complexity of the times and the difficult balance that's needed to recreate an experience that is truly internal and "psychedelic" in a way that can be enjoyed by all.

With "Piece of Mind," we have a real testament to one person's take on many of the influences of the time, and the journey is definitely as inward as it is outward. Looking back, there will be those who prefer more pop with psychedelic tinges in their music, as well as more accommodations for listeners who want their music a certain way. But this is an album that sets its own standard.

While the Doors plastered some jazz chord changes onto "Light My Fire," they also couldn't escape the blues background that placed them firmly in a traditional setting. "Piece of Mind" is part jazz as well, but the sound changes from song to song, and it points towards the experimentation of bands like Can, Agitation Free, and the German rock of the 1970's. Listeners may hear cues from folk, jazz and psychedelia, but it's really an album "sui generis" that stands out as an anomaly. People may love it or hate it, but that could well have something to do with where this album points towards, and the listener's attitude about the developments in music and marketing that occurred throughout the seventies.

Regardless, this James Brown meets Arthur Brown meets Pete Brown sort of eclectic style is definitely ahead of its time. Although there is some folk and plenty of acoustic guitar to be heard, this is not a traditional album. The reference guide "Tapestry of Delights" calls Roger Bunn's "Piece of Mind" 'weird but serious pop-sike.' You can hear that in the album along with a whole lot of other sounds.

Meeting Roger one afternoon and listening to him weave a conversation from history and religion through politics and music, (the whole time accompanied by gentle improvisation on his electric guitar), I could tell that this was a person who puts a lot of himself into what he does. "Piece of Mind" is definitely of a time, but as a message from Roger himself, it also makes you see the artificial limits of our rush for "new" sounds and things. There is new and old, and then there is truly adventurous music.

"Piece of Mind" has some of the sound of a particular time in musical history, but it also has the enduring sound of someone trying something different. And it's that second part that goes a long way towards explaining the difference between commodity-based entertainment and art.
by Joe McFarland 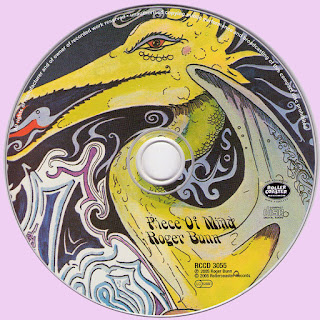 Free Text
Text Bin
Posted by Marios at 2:46 AM

A fine album by all means. It's a pitty that it was buried at the time of its release due to 'bad decision making', according to AMG. Thanks very much...

any chance for a re-up? very intriguing album.

Thank you, perfect staff and job.