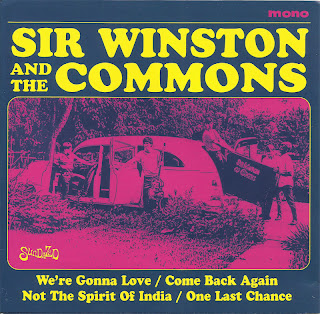 If any band personified the epic musical voyage of the '60s it was Sir Winston and The Commons from (where else?) Indianapolis, Indiana. Born in 1963 as a surf combo called the Suspicions, Ron Matelic, Don Basore, Herb Crawford, Joe Stout and John Medvescek rode each subsequent pop culture tsunami as it swept across America: from the English Invasion and jangly folk-rock to snotty garage and sitar-laced psychedelia.

Changing their name to Sir Winston & The Commons in 1964 at the urging of Bob Kelly, their booking agent, the boys adopted fake English accents for a brief period while playing weekly fraternity keggers at Indiana and Purdue Universities. "Some could do the accent and some couldn't," chuckles Matelic. "We told people we were from different parts of England. But then we'd run into guys we went to high school with, so we said, 'Forget this.'" Matelic relied on the late night radio signal of WBZ out of- Boston to pick up on the hottest new tunes weeks before his peers, insuring Sir Winston continuous bookings at teenclubs sprouting up all over "Naptown," like the Whiteland Barn, the Flame Club, the House Of Sound and the Westlake Beach Club (with an indoor swimming pool and a detachable roof). "There was a club in every corner of town," recalls Matelic. whose band competed for gigs with the Boys Next Door, the Idle Few, Sounds Unlimited and the Dawn Five.

Sir Winston's new booker, Sonny Hobbs, convinced them to concentrate on original material, which soon garnered a single on Soma Records out of Minneapolis. "We never actually met the Soma people," insists Matelic. "They sent us to Columbia Studios in Chicago to record that single. Herb and I both had fuzz-boxes, so 'We're Gonna Love' was inspired by 'Satisfaction.' The other side, 'Come Back,' we tried to make sound like the Beatles' 'Things We Said Today.'" The crowning achievement of Sir Winston's career must have been "Not The Spirit Of India," a subtle yet peppery ragout from 1967, released on their own label, Nauseating Butterfly! "Herb thought of the label name," smiles Matelic, "the Frisco thing had hit: combine any adjective with any noun." Recording aside, Matelic alleges the most fun the group ever had was on periodic incursions into Chicago.

"We'd charter two buses to take all our family and friends down there to see us play at The Cellar." The band's ultimate kudo may also have come from that Chitown nitery, considering it was frequented by the Shadows Of Knight and Saturday's Children. "Everybody there thought we were really weird," says Matelic, still proud of the backhanded compliment.
by Prof. Jud Cost 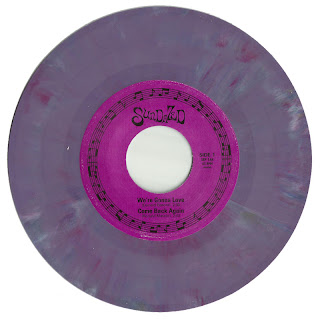 Related Act
1976-77  Anonymous - Inside The Shadow / No Longer Anonymous

Free Text
Posted by Marios at 7:03 AM

Very unusual and very nice! Thanks a lot Marios!

This link seems to be dead, could you please re-up.
Your blog is the absolute best on the internet. I really appreciate all the great posts.

Awesome stuff. Thanks for all the work in uploading these gems!

Thanks for reposting it Marios.