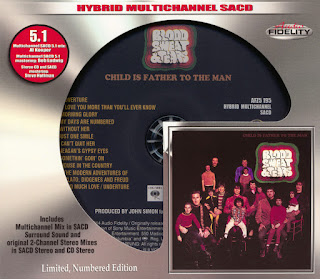 This album is unique. More precisely, it is the first of its kind — a music that takes elements of rock, jazz, straight blues, R&B, classical music and almost anything else you could mention and combines them into a sound of its own that is "popular" without being the least bit wattered down.

That Blood, Sweat and Tears is a band and not merely a melange whose diverse constituents (a trumpet player from Maynard Ferguson's college-dance-and-concert big band, a drummer who has gigged with Eric Anderson and whose elder brother is Thelonious Monk's personal manager, several young white New York jazz horn men who were technologically unemployed by the New Thing revolution and physically unemployed by the shrinkage of available nightclub and record jobs, an L.A. bass player out of the Mothers of Invention and a pair of old Blues Project-ers) are at war with each other is greatly to the credit of Al Kooper, its organist, pianist, vocalist, arranger and general head honcho Child is even more complex than that, what with the addition of a string section, a "soul chorus" and asorted sound effects on several of the cuts. But Kooper and the other musicians involved knew the sound they were after, and having achieved it, they kept the effects strictly secondary.

Two of the songs, "I Love You More Than You'll Ever Know" and "Somethin' Goin' On" are very nearly perfect, self-contained masterpieces. Both written by the leader, they are extremely bluesy, but without the credibility gap that afflicts almost all white blues performances. This is because these are Al Kooper's blues, Blood, Sweat and Tears' blues and not anyone else's, not Robert Johnson's or B. B. King's or Wilson Pickett's blues or, on the other side, Hank Miller's blues — just as "She Belong to Me" is Bob Dylan's blues and Gerry Mulligan playing "Blueport" is the blues, and those are two pale cats. They are big city blues, New York blues, too much happening blues, they are the blues used as a frame for deeply felt experiences and that's what the form, any form, is all about anyway. If you use it your way.

Musically these cuts are tight where they should be tight, loose etc. What they do is swing, a term or honorable antecedents (see Duke Ellington) that is too little heard these days. For a working definition Fred Lipsius's alto solos are more than just adequate; they are, quite frankly, better saxophone playing or just plain better anything playing than one would expect to hear on a rock and roll record. Lipsius blows right up to the limits of the form and even makes them bulge a little, but he neither pierces nor transcends them. He doesn't need to and it is doubtful that he wants to. What he sets out to do is play the blues, and a booting, exciting pair of blues solos they are.

It would have been a minor miracle if the entire album had maintained that level. Most of it is merely very good. Steve Katz's vocals, and his choice of material does nothing to minimize the dull graininess of his voice: Tim Buckley's "Morning Glory" and Katz's own "Meagan's Gypsy Eyes" are the two folkiest songs on the record. They make pretty limp vehicles for the horn section — and why did Kooper and Lipsius chose to frame "Morning Glory" with the corniest kind of Ferguson over-arranged opening and closing riffs? Probably this, like the animal sound effects, will be forgotten by the time they record again.
by Rolling Stone,  April 27, 1968

Thank-you Marios! For decades the only post-Dylan work by Kooper I had heard was Super Sessions, which is alright but didn't inspire me to seek more. The Kooper solo albums you posted educated me regarding his ability to craft a really fine and nuanced studio album. This opportunity to hear another of his projects from the same time period is very much appreciated!

Thanks very much Marios. This classic album is a unique combination of elements. Others were using some of the same components, but not in the same way. Plus, what an incredible horn section!

..One of my earliest posts..