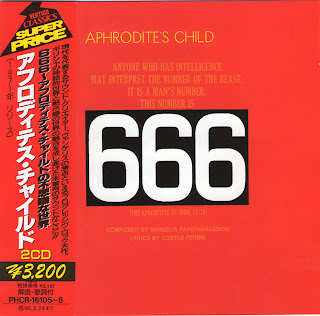 Progressive rock is a marvelous genre. It is a musical style that celebrates experimentation, often incorporating elements of instrumental complexity that descents directly from the improvisational nature of Jazz music. Another familiar aspect of the genre that has become synonymous with Progressive rock is the idea of a conceptual theme within the lyrical content and musical orchestration, adding an element of storytelling to the listening experience. 666 by Aphrodite's Child, is the epitome of everything we love about Progressive rock. It is not only an epic adaption of Biblical passages from the book of Revelation, but a musical journey that transcends past traditional rock music and explores a vast variety of genres.

666 is a musical expansion, going far beyond the typical Psychedelic and Progressive rock music of the earlier albums by Aphrodite's Child. The album itself is a personal voyage where the musicians discover their full potential, experimenting with different classes of instruments and musical styles to simply see just how far they can take this album. "The Four Horsemen" is certainly the most accessible song from the album. It opens with a delicate ambience, soothing and gentle in nature, providing an elegant setting for a soft narration delivered by Demis Roussos. But from this ethereal atmosphere, as a powerful drum delivery erupts out of silence, we descend into a traditional rock sound. The instrumental sections in 666 are performed quite dexterously, especially the guitar arrangements. "The Battle Of The Locusts" and "Do It" are a prime example of the impressive musicianship in the album, displaying an evident influence from Jazz as they exhibit eruptions of elevated solos in an almost free-form environment.

As I said before, this album is an exploratory odyssey, a descension into abstract musical dimensions. Of course, 666 tends to favor a psychedelic atmosphere within the majority of its compositions, but we do see Aphrodite's Child leaving their comfort zone and enthusiastically voyaging into the previously unknown. There are various examples of songs incorporating a vast variety of influences ranging from, Musique concrète, Jazz, and even eastern influences with orchestrations that contain Raga aesthetics. "All The Seats were Occupied" coalesces all of the different genres that Aphrodite's Child explores in this album into one long musical voyage. "All The Seats were Occupied" is the penultimate track and it is a reflection of everything we have experienced in 666, opening with a gentle melodic texture and then transcending into lengthy instrumental passages that range from hypnotic psychedelic ambiences to an intense release of instrumental aggression. 666 is a true classic that has became recognized as one of the most important efforts in early Progressive rock. This is an album that must be heard by all fans of Progressive and Psychedelic music alike.
by Hernan M. Campbell

This "concept album" is in fact the soundtrack of a vast theatrical show-concert, and for this purpose I wrote the (unpublished) book, and lyrics.  Unfortunately, the show was never produced.

It is not Demis who wanted to avoid a more progressive (than "Rain and Tears") sound, on the contrary, he was very enthusiastic for a turning of the band's music. It was Vangelis who prefered to minimize the participation of Demis, just to bring-out better his composer's talent, with no interference of the "Demis the star"'s weight.

Some of the "lyrics" (such as the "announcements" as I call them) are indeed from the "Apocalypse" (how could it be different), but there are always some slight inversions or alterations of the meaning, so to support the p.o.v. of the work.  Finally, my (and our) intention was to create a "rock-extravaganza" for the 60s, and I believe, that we succeded on the sound level.
by Costas Ferris 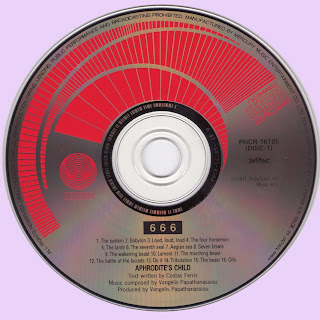 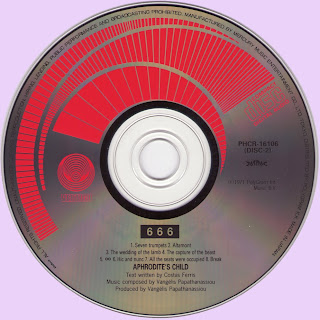 Free Text
Posted by Marios at 7:51 AM

great album ! any idea where I can find a vinyl-rip with the longer version of "Battle of the Locusts" ? also thx for the Levee Camp re-up/fix. [;-)