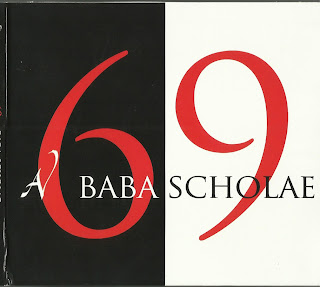 «69» of the Baba Scholae is a major album of the year 1969. It is a cult disc that never disappoints - quite the reverse, when, like me, you can listen to it in the very best conditions after decades of obscurity. Some legendary records lose their power once they are revealed and it becomes obvious that the fantasy of the music lover exceeded the realities of the work.

This is not the case here: Jean-Yves Labat de Rossi, John Arthur Holbrook and their friends conceived a classic work worthy to be ranked with the Rock masterpieces of the period. But today - all nostalgia put aside - is the Baba Scholae album still as meaningful as it ever was? Unlike some other discs reminiscent of the famous "Madeleine de Proust" the album of Jean-Yves, John, Jules, Steve, Alan and Woody far surpasses even those very appealing legendary names of the 60's such as the Marquee, the Speak Easy, Zanzibar Productions and the Rock'n'roll Circus.

This album that you can (at last!) hold in your excited hands takes us by surprise because it still affects us, here and now, as pristine as ever. The 21st century listener is perhaps even more capable of understanding this project than his 20th century counterpart because he can rely both on hindsight and 40 years of musical productions which his glorious predecessor could not enjoy. Terms such as "rock psyche" or "progressif impose too many limits to apprehend this Anglo-French opus. Jean-Yves Labat de Rossi and his "partners in crime" were far too young, proud and ambitious ever to want to imitate the groups of the late 60's who nevertheless brought out "instant classics" with disconcerting ease.

Baba Scholae is a stubborn entity that aimed at going forward to explore new territories with a freshness that prevented them from falling into the pitfalls of the ironic post modern pastiche that weights down many contemporary discs. "If it does not exist, it must be invented" such seemed to be the watchword of Baba Scholae which could rely on the recklessness of the young that allows progress to be made without following established tracks. Pioneers are not conscious of being so and allow themselves to make creations which their successors would never dare to imagine once the "tables of the law" of rock had been set in stone.

In this sense, without knowing it, Baba Scholae enters into the family of artists and cross current groups who, even if they are inspired by their environment and their times, are not their prisoners. Some names?: Frank Zappa, Devo, Brian Eno and the Flaming Lips, are explorers who, in their own way, like "the Enterprise" of Star Trek, have all sampled worlds where man had never previously set foot. Some proofs?: 1984-Melancolia Street is a folk song stamped with Saudade that would not be amiss amongst the present day renewals of this musical style.

Half Day could have been a title of Gorky's Zigotic Mynci with its accents of the school of Canterbury revisited. Kaleidoscope is a timeless pop song, perverse in its structure, that would make the galaxy of artists of the Elephant 6 collective such as Olivia Tremor Control green with envy. Keep it "rythmique", with its mixture of folklore and hypnotic playful pop, is worthy of the great moments of post-rock.

I must stop here - or I could go on for hours, but I am sure you have grasped the gist of my remarks. Like the greatest uncut diamonds in the history of rock, Baba Scholae "69" is an exceptional record which could remain buried for several generations without losing its lustre. Let us meet in 2050 when I have no doubt that the musicologists and critics of the future will reach the same conclusion.
by Jean-Emmanuel Deluxe, July 2012 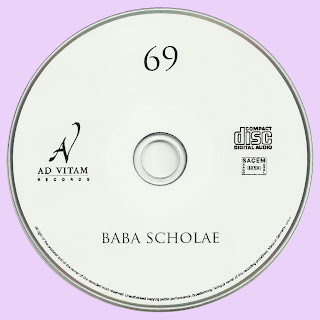 The first track is quite remarkable: http://www.youtube.com/watch?v=ONURefixcls . Thank you, I will investigate this!

Thank You very much, Marios !!!

Never heard about it. Downloaded. Unwrapped. Then listening to it first time. Then again, again, again.
It is a miracle. One of the best records in progressive rock vein. It is in the same league of quality such as King Crimson's In The Court of the Crimson King or Colosseum's Valentyne Suite or If's Second Album. True, rich and high musical quality progressive rock.
Excellent. Outstanding. Highly recommended!!!
Thanx Marios!

In 1969, legendary psychedelic/early progressive rock band Baba Scholae recorded an album at IBC Sound Recording Studios in London -- however, it was never officially released. The band's leader was Jean-Yves Labat de Rossi, better known as M Frog, the synth and keyboard maestro on Todd Rungren's early Utopia albums and coincidentally, the founder of the Ad Vitam label. Only three copies (acetates) of 69 were made, but the album's cult following lasts to this day. Often compared to the work of King Crimson, Pink Floyd, Soft Machine, and Gong, Baba Scholae's 69 is truly a 'lost and found again' masterpiece with music that was years ahead of its time. For a gem like this to have been buried for 43 years.

The music found here is an excellent psychedelic / folk rock / proto-progressive album recorded in London with primarily English musicians on board, though Labat himself was French. The first track '1984-Melancolia Street' (8:40), in particular, will send fans of the progressive rock genre into a swoon, with its multiple theme and metric shifts, recalling cutting edge UK outfits such as Cressida and Web ("I Spider" era). Some excellent guitar, sax, bombard (a reed instrument primarily used in Brittany), and flute define this advanced work. Perhaps not mind-blowing on the whole, but given the 1969 date, certainly one to two full years ahead of its time. Fans of the psychedelic infused progressive genre will most definitely want to own this. It's a professional recording preserved for the ages, not some muddy demo that you have to endure to fully appreciate. For something like this to be buried for 43 years is quite extraordinary. Do not miss it!

Marios, thank you for this gem! I've dl-ed it twice, but my burning program keeps giving me an error message thatthe wave is corrupted. Anyone else having probs?

THANK YOU VERY MUCH