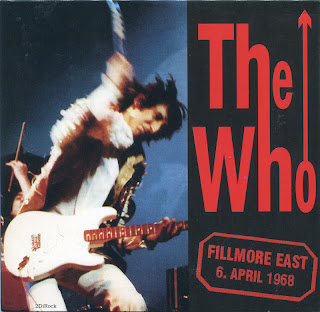 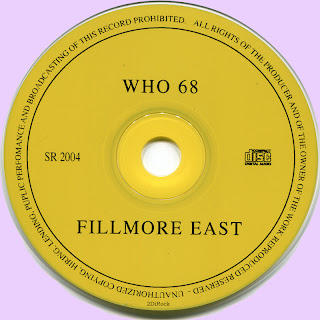 Free Text
Text Bin
Posted by Marios at 10:32 AM

The Who's, Live at the Fillmore East is a great live document of The Who in their early prime demonstrating their dynamic and powerful stage show. This recording must have been professionally recorded since it was suppose to be released as a live album and has been a popular bootleg of the band. For whatever reason that idea was scrapped and instead the band released Live At Leeds a couple of years later, their only official live album. The Live At Leeds album wasn't too shabby either as many consider it one of the best live albums of all time (The New York Times, Q Magazine) and Rolling Stone placed it 170 in their top 500 albums. Both recordings feature the band performing extended jams and their incredible raw energy is what made The Who are known for. Even more amazing is watching video concert footage from this era, especially Townshend.

Since this was one of their most bootleg shows, there are various versions of this concert around with different dates and slightly different set list that omit tracks.

As far as I know, this is the complete show and the last three tracks are from French TV in 1966 (read the back cover track listings). This is great, get it while you can! Enjoy!!!

Thanks so much, Marios!

Thanks a lot, Marios! This is a most interesting document.

Thanks for all you time spent sharing this great music. Long live one of the most exciting drummers of all time Sir Keith Moon.

Thanks for this release. I used to own this show on a WPOCM CD from the late '80's called "Furious Prelude"(dubbed from a vinyl of course) but this is the real deal. Sounds great!

many, many thanks, cheers and happy weekend