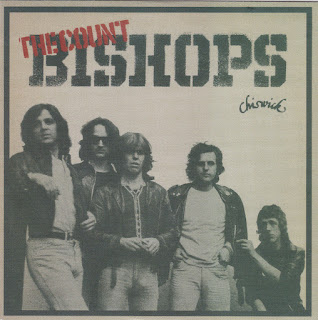 They were our first band way back in 1975, even before punk rock was invented and independent record labels were still few and far between. We released the “Speedball” extended play 7” vinyl 45 rpm record on Chiswick Records as by the Count Bishops. By the time of the first Chiswick album the vocalist had been ejected and Dave Tice added to the original band of Zenon De Fleur – rhythm guitar / Johnny Guitar – yes, you’ve guessed it, on lead guitar / Steve Lewins – bass (replaced by Pat McMullan on the second album) / Paul Balbi – drums. They were a total powerhouse of a band, with a tough R&B sound carrying more weight than Dr Feelgood and just this side of Motorhead, who they played with regularly. The young Julian (Jools) Holland tickled the ivories with great aplomb on both of the albums.
They delivered a mix of originals and astute cover versions, the latter drawn from blues, soul and beat sources as well as just plain good songs. Willie Dixon, Elmore James, Sonny Boy Williamson and Slim Harpo were all inspirations on these Long Players. Ray Davies, Van Morrison and Jeremy Spencer were all inspired by these same blues legends and so the tradition continued with covers from them too. The soul side is represented by a fine Hayes / Porter tune and one from Otis. But the single from the first album consisted of two sides written by Zenon who also wrote some great blues-based numbers with singer Dave Tice on the second album. The second single from that LP, which made it as far as Top Of The Pops, but unfortunately no further, was their storming rendition of the Strangeloves’ I Want Candy, which later charted in a somewhat more anaemic version for Bow Wow Wow. And we did try with releases in 6”, 7” and 10” formats.
The band maintained a healthy touring schedule and though they turned out great records, they were absolute dynamite live; very few bands at the time could stand up to them.
However the tragic death in a car accident of Zenon in March 1979 was a blow that the band never recovered from. It was not just that his driving rhythm guitar was sorely missed, but he was really the force behind the logistics of a band who toured a lot. He died suddenly and unexpectedly in hospital a few days after totalling his Aston Martin on the way from a gig. While in hospital he was overseeing the finishing touches to the second album’s release. The third single from the second Chiswick studio album was a great take on John D Loudermilk’s witty Mr Jones and it came out shortly after Zen’s death. The album followed a month later and the band went on the road with a substitute guitarist. They toured Australia later that year, but never played the UK again after that.
But they left a hell of a legacy in these two studio albums as well as a live album. For a long time bands like the Bishops were swamped in people’s minds by the onslaught of punk rock, but when it came to being tough, when it came to lifting an audience off their feet, the Bishops were a hard act to follow.
ACE-Recs 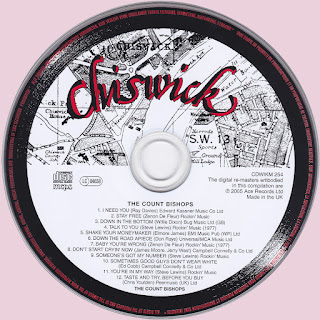 Greatful day! Many thanks for uncompressed!!!