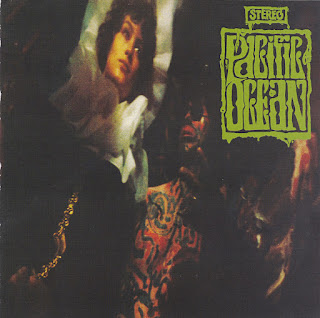 Pacific Ocean was an American West-Coast Psychedelic band. They released one and only album in 1968 by the VMC label, known for releasing great Psychedelic albums.
There isn't much information about them, but actor Edward James Olmos (Miami Vice, Battlestar Galactica, Mayans M.C., TV series, and movies like Blade Runner among others) plays/sings lead on the album. Most of the songs are covers except for two of them. This 1968 album smashes in like a hot stone with that soulful drive.
The beginning of the sound is great. "I Can't Stand It"   best part are the vocals, principally the Back-Vocals, the growling Lead-Vocals is really cool too. "  99 1/2"   has an intensive use of the Organ. "Road To Hell"   and "My Shrink"  are the only original songs, in "  Road To Hell"   the vocals sound just like Iggy Pop and the accelerated pace of " My Shrink"   is really nice, and it has a great Guitar solo in the middle.
"16 Tons" originally by Merle Travis. Pacific Ocean gives a power to the song that it originally missed, that was the objective of this album probably, to give the power of rock music to old country tracks.  unlike the previous songs where they sped up everything "Subterranean Homesick Blues",  it's much slower than the original, it has a much groovier sound. The Miracles where the first recorders of the hit-song "Tracks Of My Tears"   by the big label Motown. 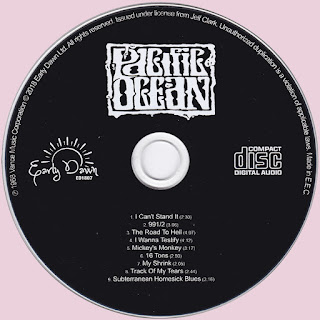 I'm so grateful to you for putting up this CD. Thanks "MARIOS"...

I thought I knew music and I happened upon this browsing youtube. Love what I have heard so far. Ya'll are one of the few places I could even find out anything about this record.