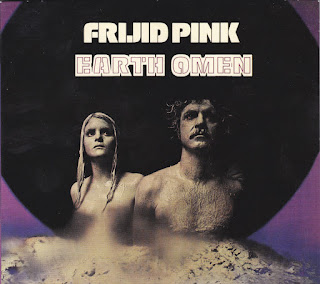 The Frijid Pink saga began in Allen Park, a suburb of Detroit located in the southern part of Wayne County. Composed of tree-lined streets and neat brick houses, the city was closely associated with the Ford Motor Company. Many of the auto company’s offices and facilities are still located within the city limits as is the Uniroyal Tire, the world’s largest sculpture of a tire. The city’s main roadside attraction was previously a Ferris wheel at the 1964 World’s Fair in New York. The structure, which is 80 feet tall and weighs 12 tons, was moved to Allen Park in 1966.
Round 1971 two former members Kelly Green and Gary Ray Thompson left the band, but their leaving not only derailed the tour and killed any hopes for the “Music For The People” single, but also cost the band its record label. The two remaining original members Tom Harris and Richard Stevers weathered the storm and auditioned new musicians. They eventually came up with a lineup that included Harris and Stevers along with keyboardist Larry Zelenka, Jon Wearing (formerly of the Tidal Waves) on lead vocals, and Craig Webb on guitar and vocals. Now signed to Lion Records, a subsidiary of MGM, this is the group that recorded “Earth Omen” in 1972. By this time the band’s management had also changed. The road had taken its toll on the marriage of Judy Harris and Marv Wilson and they dropped out after their divorce, leaving Clyde Stevers in charge.
The change in band personnel was reflected in the new material; and many of the songs were written during casual jam sessions while sitting on the floor of Stevers’ apartment. The album was recorded in the Osmond Brothers studio in California. “Earth Omen” was a commercial flop, however. Looking back, it may have been a little ahead of its time; and it was certainly different from the first two albums which may have confused or even disappointed Frijid Pink’s original fan base.
When it came to the all-important promotion of “Earth Omen” Stevers stated:  “Lion dropped the ball, didn’t push it, didn’t give it to the reps to push in the music stores. They didn’t do anything. It was just left to lie and rot. It was unfortunate because there were some good songs on it. The sound of the music was cleaner, easier to listen to, and more progressive than the other stuff we had done to that point”. Equally disappointing were the singles “Lazy Day” and a cover of “Go Now”, featuring the backing vocals of Hopkins and Wilson, released in the wake of “Earth Omen”.
“Earth Omen” album has gained respect over the years. One of the most polished rock albums of 1972-73, and definitely one of the most overlooked”.
by Gary Johnson, 26 June 2013 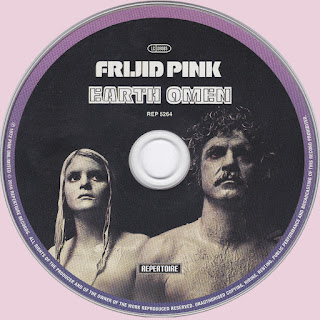 Quite good album.Thank you for remaster version...

Further proof that the Americans don't really 'get' Prog!!! Deeply mediocre but thanks for giving us the chance to find out.

They also sometimes confuse folk and late-date baroque pop as prog. Iron Butterfly and Oasis were good, and Ambrosia was okay I guess, but none of these were prog by any stretch of the imagination.

Absolutely.If you were (like i was) when there when all these genres were still fresh there is no way you would make these retrospective mistakes you see all over blogland now.The number of cds that are described as 'heavy prog' or even worse the horrible 'brass prog' have absolutely nothing to do with real prog like Tull,Crimson,Camel,Focus,Gentle Giant and Yes.The musicianship of awful bands like this Frijid Pink is nowhere near on the same level as the real prog.Is it any wonder these bands on this site languished in obscurity for so long only to be dug up and reclaimed as 'lost masterpiece' etc.

'lost masterpiece' is a term hyped by Record Collector , Goldmine, to give obscure dross a reputation that it never deserved. There are dissapointingly few true 'lost masterpieces' .

Unknown & Anonymous, very narrow-minded view, prog rock did not begin with genesis and yes, and of course did not stopped when they released songs like "owner of the lonely heart" or "Follow You Follow Me"..(lol)

I hate to say which was the first. Prog didn't emerge fully formed overnight but was starting to take shape by late 1966- mid 1967. King Crimson very likely got the idea to play "Mars" from Sands' "Listen To The Sky". And of course everyone was taking note when Beatles songs started to run more than 3 minutes. I think proof that the Moody Blues aren't really prog is the fact that the group with Mike Pinder was very popular in Hawaii where music fans are rather conservative. No disrespect to the Moodies, I have all of their albums featuring Mike Pinder, the world's first Mellotronist. And my nieces liked to listen to them when they were small children, especially the Ray Thomas songs.

Shame this file is blocked by Cisco.. would have liked to have heard it for myself.

Doc, what do u mean it's blocked?

Its when at Turbobit when I click on the download button I get a red Cisco block screen .. I've run into this problem before.. it's because one of Turbo's servers (tb350) has been blocked by Cisco because they claim it's got issues.. All the other servers appear to be just fine.. but any directs by TB to that particular server don't download.
Doc