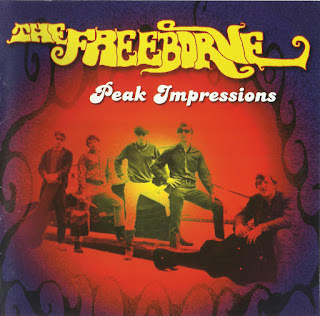 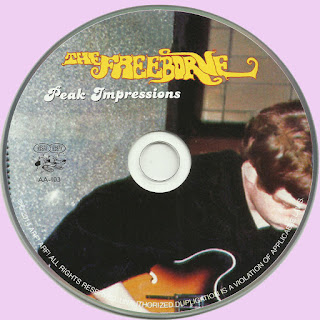 Free Text
Text Host
Posted by Marios at 7:09 AM

Thanks for offering up the option of vinyl vs ext'd disc versions of this one Marios - really appreciate it!

The Freeborne sole album, PEAK IMPRESSION (Monitor MPS 607) 1967 has been counterfeited at least twice on vinyl in the eighties and nineties. It has also issued on CD by Afterglow in 1995, but with one track either edited or missing recently the album has been reissued on CD by Distortions (DR 1041) 1998, Second Harvest 2007, this time with three bonus cuts!

A Boston group whose sole album, recorded at CBS Studios in New York, is - full of the acid imagery which typified the Bosstown sound in 1968. The record sounds like it was steeped in many listening sessions to the most popular psychedelic records of 1967, particularly the Doors' first album, Jefferson Airplane's Surrealistic Pillow, and the Beatles' Sgt. Pepper.

Almost every track is of interest. For example "Land Of Diana" has a compelling organ intro, “Visions Of My Own” follows, coupling some quiet acoustic guitar with an incessant recorder riff. The pace continues to be slow, the lyrics dreamy and quasi-intellectual, the melodies irresistible, once their odd sensibility grow on you. A brief anti-war statement follows, disrupting the pace a little, though it has a nice, sparse arrangement. Side one ends with the album’s masterpiece, “Peak Impressions & Thoughts,” a song with an absolutely relentless beat and chord progression, mind-melting lyrics and keyboards that build in intensity until they’re all over your room.
Side two is kind of a let-down, by comparison. It’s not bad, and the songs are still full of ideas, but they’re not as unique or memorable as what preceded them, as they mine blues, jazz, gospel and garage rock and repeat themselves a bit. The long instrumental section that comes near the album’s close goes in and out of focus, and though these guys often write like jazz musicians, they don’t have that kind of chops. Of course, I lose interest a few minutes into the Velvet Underground’s “European Son,” too, so take my dismissal of this song in that light. Like all of the other choices for this session (except The Smoke), the Freeborne get definite points because they just plain don’t sound like anybody else. And side one is a completely solid listen.

The overall spacey, haunting feel of the record sometimes verges on self-conscious creepiness. It's embroidered by novel use of recorder, cello, harpsichord, and trumpet from time to time, though electric organ in the mold of the Doors or Country Joe & the Fish is more prominent, as is California psychedelia-influenced guitar.

In the mid-'70s, Bob Margolin became a member of Muddy Waters' band and he later played with the Johnny Winter Group. He is still touring and recording Chicago Blues albums. Nick Carstoiu too remains active in the music scene.
In 1978, Mike Spiros released, as "Mic Spiros and the ITMB (Incredible Two Man Band)", a rare album of atmospheric prog rock based on keyboards and synthesizers.

Thanks again Marios for the sharing.

Any chance of the 2014 Digital Remaster?