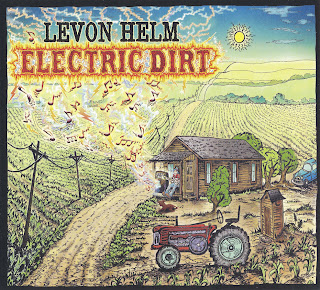 Rest In Peace Levon Helm (May 26, 1940 – April 19, 2012)
Electric Dirt  is the second album in the last five years (after the 2007 "Dirt Farmer" and followed by the 2011 "Ramble at the Ryman")  from American musical treasure Levon Helm.  Its predecessor, Dirt Farmer, his first solo LP in a quarter century, followed Levon’s near-miraculous recovery from throat cancer, and as such represented a new lease on life for the legendary artist, who rose to prominence as the drummer and vocalist for Levon and the Hawks, which later became The Band.

The accolades poured in after Dirt Farmer’s release in the fall of 2007. “This album is nothing less than a return to form by one of the most soulful vocalists in rock history,” raved the San Francisco Chronicle, reflecting the universal sentiment. Levon was named Artist of the Year by the Americana Music Association, and the album was awarded the 2008 Grammy for Best Traditional Folk Recording. Meanwhile, Rolling Stone hailed Helm’s Midnight Ramble, which takes place monthly at Levon Helm Studios—a.k.a. The Barn—in his longtime home of Woodstock, N.Y., as 2008’s Best Jam Session.

“I’m not surprised that Levon wanted to do another record so quickly,” says multi-instrumentalist Larry Campbell, who, along with Amy Helm, produced Dirt Farmer and who, due to Ms. Helm’s obligations as a new mother, was the sole producer of this project. “It turned out to be a promising relationship as far as he and I were concerned, and a promising situation overall. We all had the sense that Levon’s reemergence was long overdue, and it was downright thrilling to hear him singing again at the Midnight Rambles and during the sessions for the last record, after the possibility of losing that voice forever. For people my age and a little bit older, it was as if the Beatles had gotten back together. That would have been a very important voice to have lost, and to get it back again was monumental.”

Two of the tracks were arranged by the legendary Allen Toussaint with the LHB horns and the other two tracks by trumpet-playing band member Steven Bernstein. Best known for his work with Marianne Faithfull, Lou Reed and Rufus Wainwright, Bernstein is also leader of New York avant-jazz band Sex Mob. So this is a diverse group of skilled musicians united by their feel for and devotion to Helm’s singular vision.

Electric Dirt again finds Levon steeped in tradition in his connection to the land and those who live by it, but this record goes deeper and wider, incorporating gospel, blues and soul elements in a bracing collection of originals and carefully chosen outside songs.

“We knew we couldn’t just remake Dirt Farmer; it had to be something different,” Campbell explains. “Because as great as that record was, as convincing as Levon was and as pure as his impulse was to make it, that’s just one aspect of what he’s about. I knew that we had to keep that vibe but build on it—get more expansive. We wanted to get closer to what we do in the live shows, but not depart too far from that organic thing. Given all that, it was difficult coming up with an actual concept, but as the tunes were collected, it started to present itself. We wanted to get a few tracks with the horns on them, but we didn’t want to hit everybody over the head with that aspect, so it took a lot of thought to come up with tunes and arrangements that wouldn’t alienate the audience that embraced Dirt Farmer. Which meant keeping away from overproduced, slick sounds—not that Levon could ever get close to that—but the idea was to keep it honest.”

A pair of Muddy Waters tunes, “Stuff You Gotta Watch” and “You Can’t Lose What You Ain’t Never Had,” was actually cut during the Dirt Farmer sessions, although they perfectly fit the vibe of Electric Dirt. “Initially, there was some discussion about doing a straight-ahead blues record, but that ain’t right because that’s changing what the last record was, not expanding on it. There is a blues feel to some of the performances, and the blues is a part of what Levon is as well. But the objective was to just present more of his depth as an artist.”

Electric Dirt’s numerous high points start right at the top, with a rousing rendition of the Grateful Dead’s “Tennessee Jed.” Campbell and Williams spent a good part of 2008 on the road with Dead bassist Phil Lesh, including some shows on which Helm and Lesh appeared together. “There was some real comradeship going on,” Campbell points out, “so we thought, wouldn’t it be great if we could find a Grateful Dead tune that Levon could do? ‘Tennessee Jed’ was always one of my favorite Dead songs, and I thought Levon could actually be Tennessee Jed. And it fit like a glove.”

Following a fervent take on the Staples Singers’ “Move Along Train,” which finds Levon breaking out his gospel roots, comes Helm and Campbell’s “Growing Trade,” which takes an empathetic look at the plight of a Southern small-farm owner. “My wife is from west Tennessee,” says Campbell, “and there are cotton farmers down there about to lose their places. Most of them are just church-going farmers with deep, moral convictions, but they’ve realized that the most important thing for them is to save the land which has been in their families for generations. And Levon has a deep understanding of what all that means, so he brought a wonderful perspective to the song and performance.”

The ancient-sounding mountain ballad “Golden Bird,” on which Campbell’s mournful fiddling deepens the melancholy of Helm’s vocal, was actually written by seminal Woodstock folk artist Happy Traum. Along with Carter Stanley’s “White Dove,” the song forms a bridge between the rustic intimacy of Dirt Farmer and the amped-up urgency of Electric Dirt. “Heaven’s Pearls,” penned by Byron Isaacs for Ollabelle, originally appeared on the group’s Campbell-produced 2006 album Riverside Battle Songs. “Amy had the idea that it would be a really good duet with Levon,” says Campbell. “So we started messin’ with that, and sure enough, it worked great.”

“I Wish I Knew How It Feels to Be Free,” whom Helm had been itching to tackle since hearing Nina Simone’s 1967 version, is at once rousing and deeply poignant in his horn-fueled interpretation. It ends the album on a fittingly life-embracing note.

Levon, says Campbell, “is in great spirits as he gets more and more comfortable with his resurgence. And the next one will be even bigger.” He’s laughing, but that doesn’t mean he or his legendary collaborator would settle for anything less. Campbell is speaking for himself and everyone involved when he adds, “This is very much a labor of love.”
Levon Helm Official Thank-you Marios. I had not heard any of Levon's later work. It's wonderful that he was able to finish his career on such a positive note. RIP Mr. Helm.

Would love to download this, but link is no longer valid.
Maybe it could be re-uploaded - if at all possible. Thank you in advance.
Best wishes,
Ted