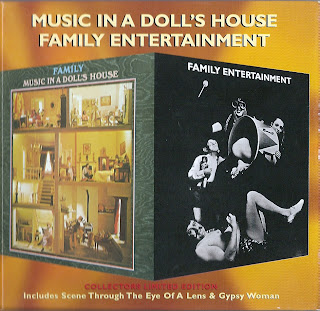 Their highly original sound has often been compared to Traffic, which may be in part due to the production skills of Jimmy Miller and Dave Mason, the latter also contributing the organic and rootsy rocker "Never Like This." Additionally, neither band was overtly psychedelic or progressive, contrasting them from the other burgeoning combos such as Soft Machine, Pink Floyd, and Caravan. Family's deceptively involved arrangements are coupled with an equally unique blend of Chapman's commanding vocals driving through the jazz and folk-rooted tunes.

"The Chase" is a spirited opener that immediately establishes their unmistakable vibe, which is furthered on the sides "Old Songs for New Songs" and the aggressive rocker "Peace of Mind." The antithesis can be heard on the rural-flavored "Mellowing Grey" and "Winter," or perhaps the almost blatantly trippy "See Through Windows." In 1996, See for Miles issued Music in a Doll's House along with Family Entertainment (1969) on a double-disc anthology, including the previously mentioned pre-LP 7" "Scene Through the Eye of a Lens" b/w "Gypsy Woman," both of which have been released on compact disc for the first time here.

Family Entertainment followed on the heels of Family's Music in a Doll's House with the band's first incarnation. While not totally dismissing their psychedelic leanings, much of the material bears a stronger acoustic influence, in much the same manner as Fairport Convention and Traffic were also exploring. The jazzy sitar lead of "Face in the Cloud" and the even more prominent Eastern-flavored "Summer '67" somewhat date the affair, and are contrasted by the beautifully noir and trippy "How-Hi-the-Li" (which may have been the impetus for Chicago's "Wishing You Were Here") and the upbeat "Hung Up Down," sporting Grech's unmistakable violin as it wafts over the rural and slightly surreal lyrics.

These sides are set against the edgy "Weaver's Answer," which immediately establishes a broader spectrum of styles, most notably given Chapman's commanding if not slightly intimidating vocals. Whitney's blistering fretwork yields bite to the Grech-penned "Second Generation Woman," while "Emotions," another full-tilt rocker, is infused with an apparent R&B homage. Interested parties should note that Family Entertainment and Music in a Doll's House were issued in a double-disc package featuring a commendable 24-bit digital remastering rendering all other versions useless -- especially the early-'90s pressing on the German Line label.

Not only are both LPs included, but the 45s "Scene Through the Eye of a Lens" and "Gypsy Woman" are finally brought into the digital domain. The accompanying 40-page liner booklet is likewise a feast for the eyes.
by Lindsay Planer 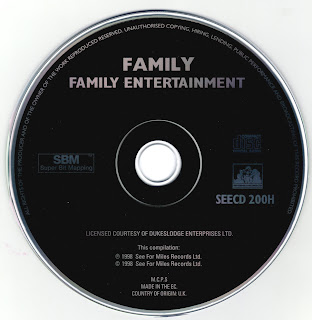 DEPOSITFILES is a NIGHTMARE!!!!!
This is the only file host that disconnects free users during dl. Please, of all the hundreds of hosts around, WHY use this????????

Hey Marios, I have the vinyl and the CDs, but I was really looking for this remaster. You make my day, thanks a lot!!!

Thank you. 'Doll's House' is amazing.

Hi Marios
Wonderful version crystal clear and oh so much better than my other copies
Thankyou very much .
Now if only they'd do a proper version of old songs new songs.....

Hey Marios
The Free Text for Entertainment doesnt seem to be working for me?!?
Am I doing something wrong?
Also, I have a copy of Old Songs New Songs, if you would like...email and I can share!
Thanx
Al

Hey Marios
Thanx...I still own all my Family vinyl, and have MOST of the albums on Mystic CD remasters...This was the only remaster I didnt have! Now it's complete. Thanx again!

thanks for this music...great blog....