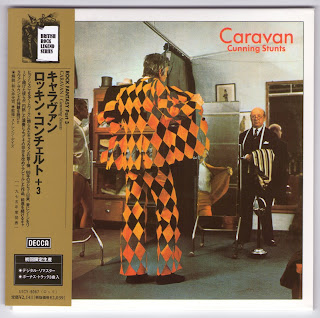 By July 1974, John Perry had moved off to play with Quantum Jump, to be replaced by Mike Wedgewood who had played previously in Curved Air.

With Dave Sinclair firmly re-established in the band, an album was put together. This was originally to have been titled 'Toys in the Attic', but they were beaten to it by Aerosmith and had to make do with 'Cunning Stunts', which featured Dave Sinclair's songwriting far more heavily.

The opening "Show Of Our Lives" was was (still is) one of my favorite Caravan tracks, along with few others which were part of a somekind a best of record by Caravan,

that i bought back there in the second half of the mid seventies. Their songwritting goes more easily with Pye's  "Stuck In A Hole" a funky groovy three minute heavenly song.

Lover is nice melodic Mike's composition with the use of an orchestra, which comes as no surprise after Caravan's 'The New Symphonia' record. 'No Backstage Pass'  (another Pye's song) flows from 'Lover' with a string introduction, and takes it good with a guitar solo.

The next step comes again with a funky groovy little piece, this time the songwritting part goes to Mike. "The Dabsong Conshirtoe" is an 18 minute composition by John Murphy and Dave Sinclair, split in five parts, a long  trip, with many turns, who gives  to members the opportunity,

to show their high perfoming level. This japanese remaster release comes with extra bonus tracks, the single version of  "Stuck In A Hole", an unissued take of "Keeping Back My Love"

which would ultimately be reworked three years later on Better by Far (1977), and "For Richard" recorded at Fairfield Hall in Croydon, England. Also there's a 12page booklet with liner notes from Mark Powell. 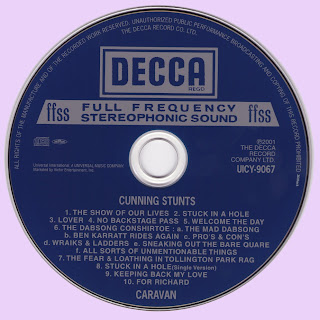 Free Text
Text Host
Posted by Marios at 6:40 AM No comments: