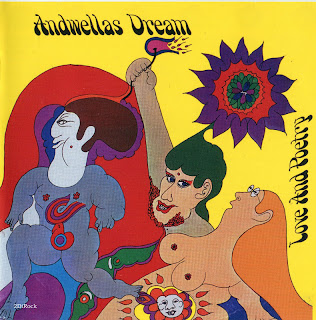 Andwella’s Dream was a thrusting injection of freakbeat that could not be ignored. Their slicing riffs were high core psyche injected from guitarist / keyboardist David Lewis, bassist Nigel Smith and drummer Gordon Barton who started out as The Method that at one time included Gary Moore.They were regulars at the Maritime Club where Van Morrison had his early days with Them.

The Method evolved into Andwella’s Dream and were the primal Irish psyche next to Eire Apparent. Dave Lewis the soaring guitarist who wrote all the songs also recruited keyboardist Dave McDougall, ex McCullochs Struthers & Paterson bassist Dave Stuthers, Nigel Portman Smith and ex One In A Million/Andromeda drummer Jack McCulloch.The bamboo flute and sax was played by future Egg Bob Downes. When Andwella’s Dream moved to London they released their primal 1969 debut Love And Poetry with surging numbers like the thrusty opener “The Days Grew Longer For Love” and guitar razzling “Sunday”.

Acoustic delights are “Midday Sun”, “Goodbye” and the Hammond rolling “Felix” which opens into crescendo breaks by Lewis. In 1970 they evolved into Andwella and launched a further two albums Worlds End (1970) and Peoples People (1971) plus a bounty of singles. World’s End although a lyrical romantic masterpiece did ignite the past as on the psyche “Michael Fitzhenry” exalting frenetic flute and Dave’s insatiable guitar riffs. The harmonies and melody that bend around the brassy I’m Just Happy To See You Get Her are creative marvels.

Future Bad Company definitely copped the riffs from “Just How Long” while the double linked “World’s End” is just so underplayed. Sterling jazz riffs trip through Steely Dan styled “Back To The Road” with Bob Downes giving it stick in the wind. There’s a bit of Billy Joel in the People’s People or even Tremeloes in the opener “She Taught Me To Love” which crystalises into the spiritual “Saint Bartholomew”.

Lewis was the songwriter extraordinaire having written the award winning film War and songs as varied as “Happy To Be An Island In The Sun”, #1 for ex Aphrodite Child Demis Roussos. David’s 1969 The Songs Of David Lewis remain a collector’s dream.
by Shiloh Noone 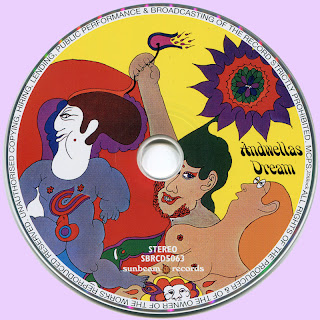 Free Text
Text Host
Posted by Marios at 10:35 AM

Hi My Friend Marios
What can I say...This is a classic UK Psuchedelic Rock,and it's great to see it here!
Oh,this is wonderful.Psycho Prog fans should know that this has mellotron,strings,flute(I have this already serval years)...this is music for one's soul!
This album is a Jewell,recommended everyone to listen it!
Highly recommended:
Andwella's Dream - World's End/People's People 1970/71
CD edit Progressive Line
Marios - for You & for all a bit of a forgotten band
http://www.megaupload.com/?d=XB20QOF5
Sincere Cheers!

Thanks a lot Marios for this group... You have the complete artwork? This CD only have back and small front.

And again thank you very much Cudawaver and Marios !!!!

Great album and the Sunbeam reissues are always excellent. Thanks, Marios!

Thanks great album,better with extra tracks.

Thanks for expanded version.Outstanding album...

this has become one of my favorite bands- from the time you posted it and introduced them to me. Thanks for sharing