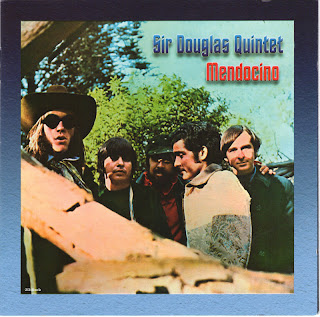 Listening to Doug Sahm can be like unfolding a musical road map; taking a journey from Norteno Texas dust, through Gulf Coast big band R&B and honky tonk country, on to San Francisco’s Haight-Ashbury psychedelic heyday in 1967.

Doug Sahm had an amazing gift for embodying, just plain being, his musical roots. A child prodigy steel guitar player, he had achieved regional hit-record status by the time he was a teenager, scoring a national hit with “She’s About a Mover” not much later.

Mendocino, with its title song a top 40 charting single in 1969, is the Sahm-led Sir Douglas Quintet’s finest hour, the exhilarating record of a musical heart, mind, and soul in perfect accord. Long out of print, this 1960s milepost is at last available on CD.

The title song is teeny-bopper pop set to a bouncy Tex-Mex beat and shot through with a dose of soul. After that sweet start, the album finds one great groove after another, from twangy fiddle-driven road epics that move along like a slightly stoned Ray Price shuffle, to distorted blues guitar freak-outs, to wide-open white soul laments. But it’s all rooted in a tight musicality that is as far from self-absorbed as pop music can possibly be. Harvey Kegan and Louie Perez, on bass and drums respectively, are a rock-solid rhythm section; Frank Morin’s horns are at least as sweet and soulful as anything Jack Schroer came up with for Van Morrison in the 70s; and Augie Meyer’s trademark roller rink-accordion organ sound is precise and brilliant, adding a sort of dusty uplift to the proceedings.

The real miracle here, though, is Sahm’s voice: a coarse growl, sweet and warm around the edges, it sounded perfect on blues, country, soul, or even Dylan-esque folk balladry. Sahm’s voice and delivery would have made him an icon even if he’d not been such a pioneer of crossroads and borderland American music.

Mendocino was an early peak in a legendary career. One of the album’s themes is its slightly self-mocking look at what it means to be a country boy in a big, strange, confusing world. But the real message lies in the feeling of pure joy in making music that runs through every track.

I bought my LP copy of Mendocino in 1972 for .99 cents from a cut-out bin at a Mammoth Mart in New Hampshire. The same day, for the same price, I scored a copy of another essential Texas document, Live at Cain’s Ballroom by Ernest Tubb and his Texas Troubadours. Both records got played a lot; they helped shape my listening –and playing – from that time on.

In some ways, Texas and the Southwest were America’s greatest musical frontier. In Stetson hat, buckskin, or tie-dye, Doug Sahm always did that frontier proud.
by Kevin Macneil Brown 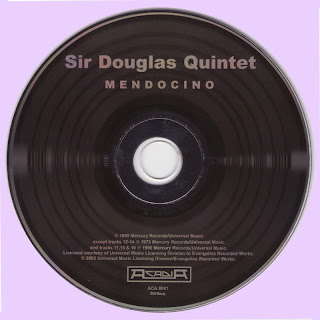 To Jamie (Tacobueno) for his great support
Thanks my friend

Free Text
Text Host
Posted by Marios at 9:21 AM

Thanks a lot for this classic...

Ha! I just noticed the dedication. Yer crazy man - but I love ya and this blog Marios!

Hi Marius. Thank you very much.
By the way I'm looking for the Doug Sahm solo album "Groovie's Paradise" and "Doug Sahm And Band". Can you help me? I Morais - Brazil

Thanks for this one.