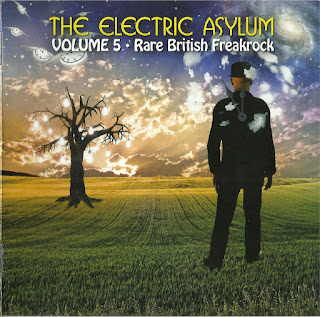 The folks at Past & Present dropped the words "acid" or "psychedelic" from the subtitle of the fifth installment in their Electric Asylum series, and with good reason -- while most of these twenty tracks are truly eccentric, these isn't much here that sounds at all lysergic.

Instead, this disc focuses on UK hard rock, glam rock, early progressive rock, and a few tunes that defy convenient generic classification. Tracey Dean's "Boy On The Ball" might have been new wave if it had a harder guitar line and had been released in 1978 instead of 1974 (Dean's voice has the most furious quaver ever captured on tape), and the oddball spoken work track that's tagged onto track 13 takes the product of a freshman poetry seminar and runs it through enough studio trickery to make it sound like the voice of a cut-rate God.

Elsewhere, the medley of "Gimmie Gimmie Good Loving" and "Gimmie Some Loving" by Biggles is hard stomping proto-glam, Hector could be the Bay City Rollers' next door neighbors on "Ain't Got Time," "The Obeah Man" from Iron Horse generates some impressive hoodoo groove, Matchbox's "Rod" is a boogie-flavored pop rocker overloaded with echo and curious synthesizer squealings, Slow Dog's "Walking Through The Blue Grass" suggests T. Rex on cough syrup, Mustard's "Good Time Comin'" is a brilliantly sludgy hard rock track, Now revel in some sweet guitar distortion on "I Wanna Be Free," and one can't help but wonder if Devo ever heard "Yeah!!" by Jets, which anticipates the sound of their Freedom Of Choice album without the socio-political angles.

Even the lesser tracks are enjoyably curious in the manner of the best British rock of the mid-1970s, and this is compelling in a way the more psych-oriented volumes in this series were not (if only because this stuff hasn't been anthologized with the same alacrity as freakbeat). The Electric Asylum Vol. 5 is weird and wild fun -- lace up your paisley boots and check it out.
by Mark Deming 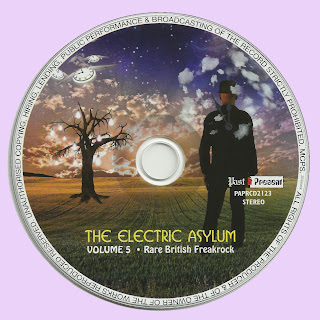