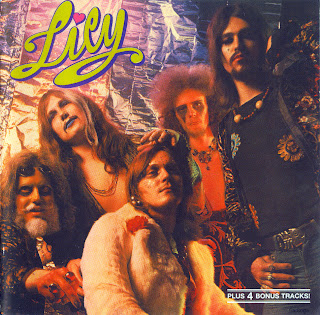 The one and only album that was released by Lily has now been re-released in CD format by the excellent Garden Of Delights label together with four bonus tracks. Musically the album features a strange blend of progressive rock which may sound extremely harsh to those who are accustomed to the British or Italian bands playing this genre of music. The German progressive rock movement, sometimes referred to as the kraut-rock movement, often did without the melodic and atmospheric nature of keyboards and the mellotron relying on a much harsher and rockier sound created primarily by the guitar.

Lily further augmented their sound with the addition of the sound of the saxophone in their lengthy instrumental pieces which helped add that jazz edge to the rock. Furthermore the band possessed two stylistically different guitarists, Manfred-Josef Schmid who had a raw sound to his playing and Klaus Lehmann whose style was much more polished. These two contrasting styles allowed for the band to expand their music to a broad base.

The album kicks off with In Those Times, which immediately indicates the Canterbury blend of music that Lily tend to play, which sounds rather strange coming from a German band! Steinberg's saxophone work coupled with the great guitar work places the band almost on a par with groups such as Soft Machine, and also the more progressive works of Delivery. What makes the track, and indeed most of the album, even more endearing is the fact that the solos do not involve endless aimless doodles, but instead fit in snugly with the musical context which remains rather strict in tempo and structure.

Which Is This is rather similar to the opening track in style, though Pinky Pigs has a much more bluesy feel. Their is also a slightly looser feel to the music giving it a much more psychedelic touch rather than the jazzier nature of the opening tracks. On Doctor Martin the band manage to fuse these elements by creating an echo-driven mystical atmosphere that occasionally breaks down into some great guitar riffs punctuated by the odd saxophone or guitar lick.

I'm Lying On My Belly (Including Tango Atonale) has a much more familiar feel to it with its rather typical late sixties bluesy stomp, though one must also make a reference to Kirchmeier's vocals. In fact, a major factor that allows Lily to be so accessible is the fact that they possessed a vocalist whose pronunciation was devoid of those normally thick German accents, whilst at the same time being able to create a rich powerful delivery.

This is further exemplified on Eyes Look From The Mount Of Flash which is distinct from the previous track in its diversity. Whereas I'm Lying On My Belly features more or less a variation on a theme, this track allows the band to broaden their psychedelic/progressive influences with the occasional space rock foray as well as some interesting time signature changes.

Thus ended the original version of V.C.U. (We See You). The remaining four tracks are bonus tracks that have been made available on CD. They must have been recorded at the same time as the album as no mention is made of any changes in line-up for these specific recordings. Possibly they were part of the original demo-tape that the band had made as admittedly the sound does suffer slightly on certain occasions.

Chemical New York is possibly the most straight forward track on the album with a well defined blues rhythm with, unlike on other tracks, a lack of a guitar solo with just Steinberg's saxophone delving into solo territory. Adlerbar further adds to the blues stomp nature of these bonus tracks and is pretty much on the same lines as Chemical New York. Hearing these Bonus Tracks over and over again leads me to think that they must have been recorded prior to the recording of the album.

The basicity of the music with little or nor variation throughout is a stark contrast to what the band's eventual album would offer. Having said that, Catch Me and The Wanderer do witness the band showing an amount of improvisation with the latter being the track to write home mostly about. This last track has solos coming from each member of the band, with the most striking being the bass solo from Kirchmeier.

Though not strictly speaking a Canterbury progressive rock band, Lily are an exciting view into the German progressive rock scene from the early seventies. Most people tend to have the notion that the scene in those years consisted only of electronic orientated bands as or else kraut rock Amon Duul clones. Lily dispel this notion with an excellent development of what is essentially a rhythm and blues foundation taken that one step further well within the context of the times the band were living.
by Nigel Camilleri 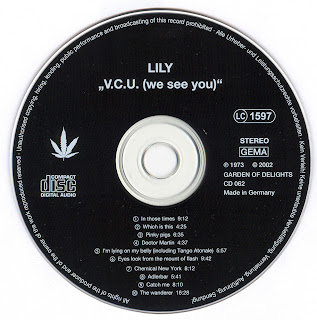