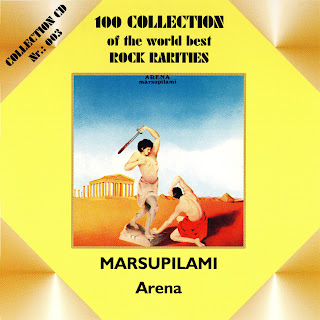 After their debut album's release, Marsi toured and expanded by adding Mandy Riedelbanch on multiple wind instruments and found themselves relocating in Amsterdam, where they were playing a series of concert in the Paradiso theatre with the then-state of the art MC2 Lightshow. This is when they started to write and rehearse for their second album, with the assistance of an external lyricist Bob West.

The album, recorded in London, was produced by future Camel founder Peter Bardens, and indeed you can hear some of Mirage's source of inspiration in Arena, including Latimer's flute, much reminiscent of Jessica Stanley. "Graced" with one of the ugliest ever prog artwork, Arena was an improvement on their debut, partly because the extra musician allowed the group to have much more possibilities, sonically and songwriting-wise.

So the aptly titled opening track Prelude does musically exactly that: it resumes the first album's progress and the band is ready to pick up things where they'd left it at. So with the following Peace Of Rome (we're in a concept, but I was never bothered to follow it too much without smirking at the pretentiousness, the worst offender being Triumvirate) is a very ambitious piece, exploring its themes over circus/arena crowd noises, and a touch of mellotron (that was missing in the debut album) and plenty of interplay time.

The mammoth title track starts rather eerily, but in a second movement, it picks a mid-eastern them over tabla and drums, but in the next one, the ambitious and daring vocal passage turns close to ridicule, but saved from it by further impressive progressions until a sharp and raw end. At one point, you can hear Laverock's bowed guitar give an acetate cello sound.

The flipside starts on effects-laden narration as intro of the other epic of this album, Time Shadows. This tracks spends a considerable time in its first movement a piano/organ duo (overdubbing from Leary, certainly), before gradually intervening are Jessica's flute, Mandy's sax and Laverock's now jazzy guitar. After an insufferably long passage dishing out whatever lyrics the track had to offer, the group unleashes on a bass and closing lyric lines, before echoing keys and sax bring the track into a very Graaf-esque ending. Indeed you'd swear this is Jaxon, Banton, and Hammill closing this track.

I'm not sure whether the closing Spring track is supposed to be part of the concept, for it doesn't get one of those pompous description like the first four tracks, but it's also a collectively-written track, that starts as a complete mayhem to slowly settle down in a dervish-like trance, with Fred's meandering scat vocals soaring over the rest of the band's great semi-raga, until the guitar and flute slowly deconstruct the group's unity (there is a superb double flute interlude that last until the organ breaks it up, announcing the piano and now double scat vocals. Fantasrtic stuff and definitely the group's best moment and it is quite accessible too. Much more than some of the more "baroque" passages that "doesn't click all the way".

One of the rare deceptions I have is that it seems that the new member Riedelbanch is only really present (or at least noticeable) on the album's flipside, which is a crying shame, because I think she made quite a difference. Arena is definitely an improvement on their debut album, but it is a bit like Gnidrolog?. Get both albums as they're equally good, even if this one will get more nods.
by Sean Trane 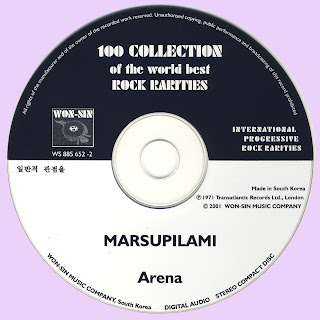