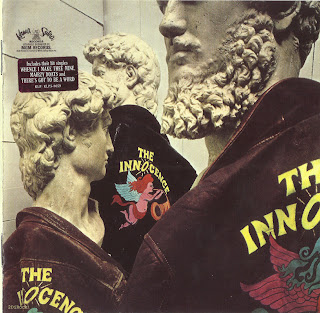 Although Memphis Sam Pearlman has lauded Rock's occasional awesome capacity for speaking without words, a more elusive standard has emerged for measuring rock achievement: speaking with words. Rock has always spoken through a tremendous array of perfectly appropriate "cliches." But that's just a basic ground for novel paths in use of the mere word and its extension and transcendence. Here is where The Innocence sums it all up. Mairzy Doats is a readymade classic.

Mere words reduced to mere sounds regrouped into new mere words which are somehow more poetically evocative than the originals. Here The Innocence speaks with somebody else's speech composed of just a pile of word play. Just playful as a silly kids' song, it has been allowed to crystallize into a monument to non serious word play. And now, after John Lennon's great books have validated just this type of "game."

The Innocence has come to resurrect Mairzy Doats and give Rock an addition so perfect for Rock and so long inevitable. And There's Got To Be A Word (Beyond the Meaning of Love) is even more than this. Groping for new words which mean more than words which already mean a whole bunch! Just look at the most obvious gem of all. The Innocence: you can even dig the pseudo-plural name of the group.
by Richard Meltzer 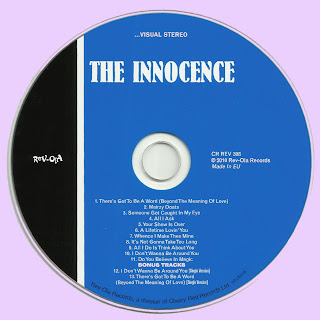