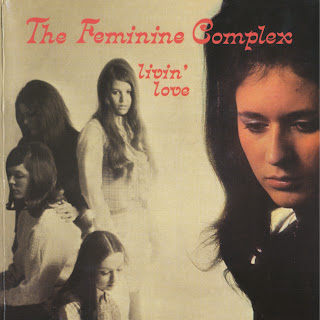 The Feminine Complex formed 1966 while the girls were attending Maplewood High School in Nashville, Tennessee. They released two singles and one album, "Livin' Love". There was even a rumour that they were a fictional band, and the material had been recorded quite recently by various American indie luminaries! This despite the original 1969 Athena Records album undoubtedly existing, and fetching astronomical figures

In fact, The Feminine Complex were an all-girl garage band, a rarity in Nashville, to be sure. They were even heavily featured on various TV shows including the nationally-syndicated "Showcase '68" and the local "Nashville Now". The Feminine Complex made one of the few genuine girls-in-the-garage albums (all original songs too!) in a time when the 45 was king (queen?), and an extraordinary album it is too, as extraordinary indeed as the story of the band.

Livin' Love is a breathtaking album of raw passion and energy. Astonishingly, it contains all original Feminine Complex songs, penned mostly by Mindy Dalton. Recorded in 1968, there is a strong sense of mind-altering musing displayed throughout Dalton's prose, which she denied carried with it any drug connotations. Even though the record is a polished outing, due mainly to the experienced backing-band brought in, there is no question that Dalton's songs demonstrated a considerable emerging talent, deserving of an "A-list" ranking in the league table of late-sixties' female rock stars. Sadly, Livin' Love came and went unnoticed; the original all-girl roster of the Feminine Complex disbanded amicably, and that was that.

Collecting valuable collector's points over the years by reaching a 'very-rare' status, Livin' Love has finally been re-released on compact disc by saviours-of-all-reissues Rev-Ola, and they have bestowed upon us a fabulous package that expertly extends the Feminine Complex appreciation.

The original album featured eleven songs, and yet this reissue contains a further eleven bonus tracks which greatly extend Livin' Love's charm. The album's opening three numbers are delicately alluring, with a brooding seductiveness that betrays Livin' Love's punch on later numbers. Now I Need You is a swirling cry of desperation, whilst the refraining Are You Lonesome Like Me? possesses a startling songwriting maturity from Dalton; the song could feature on any of Dusty Springfield's better albums and you'd believe it were penned by Lieber & Stoller.

I Won't Run powers up the tempo scales with dashing freneticism and powerful rhythm chords. Exemplary throughout the album are the backing vocals - drenched in reverb, which add a very welcome leftfield edge. Run That Through Your Mind, I Don't Want Another Man and the powerhouse I've Been Working On You signal the very best late-sixties Aretha, suggesting the band’s versatility. It's Magic has a psychedelic ambiance that is ripped apart by a delicious chorus, complete with off-kilter vocal backing. Only the Jean Williams songForgetting shows its age, with too much twee emphasis.

The Feminine Complex would have been better advised to replace Forgetting with another Williams song, Love Love Love, which was more fitting to the musical tones of the album and has thankfully been included as a bonus track on this reissue. Time Slips By is certainly the most experimental song on the original album lineup, and yet the overt panning of shimmering sound effects and the rhythmic borrowings of Love’s The Daily Planet form an especially interesting closer to Livin’ Love.

The original eleven songs on Livin’ Love do enough to justify high praise, and yet this expanded Rev-Ola package pushes the boundaries even further. The eleven bonus tracks comprise of unreleased songs by the Complex and some worthy stripped-down demos. Many of them deserve a place on the original Livin’ Love, particularly Hold My Hand. The stark two-track demos, featuring vocals on one channel and a sole electric guitar on the other, are simplistic, unrefined beauty and demonstrate a splendid raw talent that sadly was not given the chance to develop.

At least the album is “out there” again, back in the public awareness section where it undoubtably belongs. From late-sixties bands such as Jefferson Airplane to modern bands across the Atlantic such as Electrelane, there are traces of The Feminine Complex’s sound. Whilst they never were allowed to be influential, they certainly showed that they were one of the most innovative. Livin’ Love is easily one of the best reissues we have yet to see from Rev-Ola.
by Raphael Pour-Hashemi 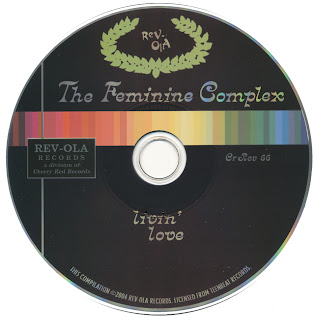