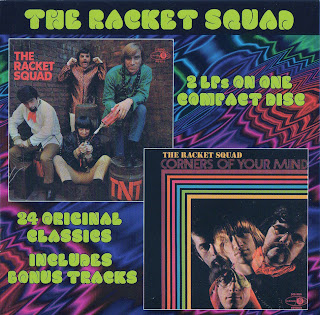 Forecast: Sonny. Good day for a walk. Bad day for puns, apparently. Without Sonny DiNunzio, however, there never would have been "Walk," which trudged its way up his hometown Pittsburgh charts. Nor would The Vogues have gotten off to such a rousing start. Nor, ultimately, would there have been The Racket Squad.

Sebastian DiNunzio wasn't a Pittsburgher, per se. He came from a little way to the northeast, in the Kiski Valley. While attending Apollo High School in 1959, he linked with a group then known as The Three Chaps (George Esposito, Joe Cesario and Bob Savastano). Sonny brought buddy Ron Fulton aboard, and the newly rechristened and numberless Chaps jumped into the record hop grind. Break came when Sonny's sister told her record-producing boss Nick Cenci about the group. Cenci thought a couple of DiNunzio originals had potential, so he had them cut "One Lovely Yesterday / Perfect Night for Love," which were released on Brent records out of New York.

The single made some noise back home, got them on TV and into the ears of dominant deejays. Searching around for another backer, they went to Lennie Martin, whose string arrangement for The Skyliners hit "Since I Don't Have You" was a rock and roll first. Another DiNunzio composition passed Martin's muster, "Heaven Must Have Run Out of Angels," to be backed with "They'll Never Be." There was a twist this time: high parts of the song were to be handled by another young guy just beginning his career, one Lou Christie, who would be launched to stardom via Cenci's Co & Ce label with "Two Faces Have I" and "The Gypsy Cried." Released on Matador, "Heaven Must Have Run Out of Angels" ran out of oomph, and The Chaps called it quits.

For a while, Joe, George and Bob headed for West Coast employment, but day jobs got old pretty quick. Summoning Sonny, they became The Four Chaps. Terry Melcher at Capitol Records gave them a listen and gave them a pass, but Bob Keene, whose Del-Fi label produced Richie Valens, liked what he heard. Securing a manager, The Four Chaps began playing around Los Angeles Meanwhile, Keene learned a new TV show was being put together, something called Shindig. The quartet auditioned for producer Jack Good, who cast them in the pilot starring Jackie DeShannon, P.J. Proby and Dionne Warwick.

The red-jacketed Chaps sang "Lonesome Traveler," with guitar support from Glen Campbell. Good was considering making The Four Chaps regulars, but Sonny was called back to Pennsylvania, and their 15 minutes of fame ticked away. So, too, went potential work with Phil Spector. That was far from the end of the groove. Back home, Sonny returned to lead vocalist duties with The Townsmen (including Ronnie George, Alan Bills and Bob Ainsworth), who became The Fenways and churned out a lengthier discography, one that continues to feed oldies radio. Beginning with titles like "The Number One Song in the Country," which was more than just wishful thinking,

The Fenways drew solid response to "Nothing to Offer You," "Humpty Dumpty," "Be Careful Little Girl" and especially "Walk," a gem of a 1966 pop rocker that bubbled under the national rankings. Deejays laid on them, especially Sonny's cousin Terry Lee On WMCK / WIXZ, one of the major players on the Pittsburgh scene. Though The Fenways never got to No.1 on their own, they hit the top through teamwork. Part of their studio time was spent under the Co & Ce banner. Cenci had signed a vocal group called The Vogues, who needed a backup band. The Fenways were around and they cut the track for the monster "You're the One," so maybe "The Number One Song in the Country," or at least in a number of markets, wasn't so far off after all.

By the following year, with changes in society inspiring changes in their hair and clothing styles, The Fenways needed a new identity. They becameThe Racket Squad and did what their former selves never did: issued albums. Two of them, and both on the national Jubilee label: an eponymous platter and Corners of Your Mind. Check out "Hung Up," their take on "Romeo and Juliet," and especially their nod to The Skyliners with that group's "The Loser." Good stuff, but not enough to assure longevity.

Various personnel logged time with the band: Bill Cotton, Gene Molanero, Joey Covington (who later flew with the Jefferson Airplane). The Racket Squad became Sebastian, but by the following decade, Sonny was working solo. A car wreck in October of 1978 brought an end to his talented voice. Terry Lee remembered his cousin through a tribute album titled simply Sonny.
by David Salinger 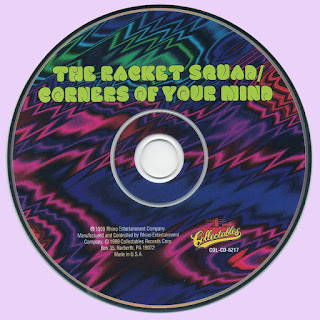