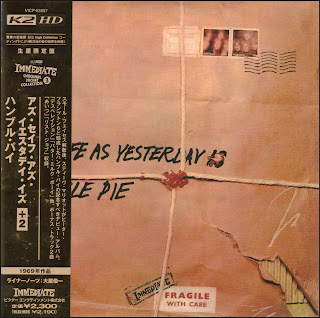 When Humble Pie was formed in 1969, the act immediately garnered attention as one of the first "supergroups," as its leading members, Steve Marriott and Peter Frampton, had already attained stardom in other rock bands. Marriott had played guitar and sang with the Small Faces, a successful rock act that had achieved a string of hits around the world, and Frampton had played guitar with the Herd, a pop-rock group that was popular in England. Dissatisfied with the direction their respective bands were taking, Marriott and Frampton decided to form Humble Pie as a rock band with a blues-oriented sound.

The band was an immediate hit with critics and started to build solid sales when Frampton left the band in 1970. Humble Pie subsequently released its most successful album, Smokin’, in 1972; following this commercial peak, the group disbanded in 1974. Marriott re-formed the band for a couple of years in the early 1980s, but it again broke up after releasing two more albums. In 1991 Marriott and Frampton decided to work together again. Although their collaboration was not officially called a reunion, Humble Pie fans eagerly awaited the outcome of the duo’s recording sessions. Tragically, after recording a handful of tracks, Marriott died in a house fire in April of 1991 at the age of 44.

Humble Pie started out with one of the most distinguished pedigrees among rock bands of the late 1960s. London native Steve Marriott started his entertainment career as a child actor and singer and appeared in the musical Oliver! in the early 1960s. After a short-lived stint as a pop singer, Marriott worked in a music instrument shop, where he met bassist Ronnie Lane.

Bonded by a love of R&B and rock ‘n’ roll, the two formed the Small Faces with Marriott as its lead singer. The band was immediately popular in England and, with the release of the top-20 single "Itchycoo Park," in the United States as well. Despite the band’s success, Marriott was increasingly unhappy with its musical direction and in 1969 decided that he wanted to leave the group. Intent on forming his own band, one of the first people he contacted was guitarist Peter Frampton.

Frampton had just left the lineup of the Herd, another London-based band. Although the group was not quite as successful as the Small Faces, it had made Frampton into something of a teen idol in England, a status that made the guitarist and singer uncomfortable. Frampton was also unhappy with the Herd’s increasingly pop-oriented direction. After leaving the Herd in early 1969, he was determined to pursue a harder-edged sound with another band. Marriott and Frampton thus had a common goal in mind when they announced that they were looking for some bandmates to round out the lineup of the group that Marriott christened Humble Pie. They recruited teenage drummer Jerry Shirley and bassist Greg Ridley and moved to Essex, England, to start rehearsing.

After making some preview concert appearances, the group was acclaimed by critics even before it entered the recording studio. The single "Natural Bom Boogie" hit the British top five in September of 1969, and the band’s first album, As Safe As Yesterday Is, was released later that year on the Immediate label, owned by Andrew Oldham.

As Safe as Yesterday Is, is a visionary blend of hard blues, crushing rock, pastoral folk, and post-mod pop. It would be even more impressive if the group had written songs to support its sound, but it seemed to have overlooked that element of the equation. Still, there's no denying that the sound of the band isn't just good, it's quite engaging, as the band bring disparate elements together, letting them bump up against each other, forming a wildly rich blend of hippie folk and deeply sexy blues.

Musically, this set a template for a lot of bands that followed later -- Led Zeppelin seemed to directly lift parts of this, and Paul Weller  would later rely heavily on this for his '90s comeback -- and it's very intriguing, even rewarding, on that level. But it falls short of a genuine classic, even with its originality and influence, because the songwriting is rarely more than a structure for the playing and the album often sounds more like a period piece than an album that defined its times.
by Stephen Thomas Erlewine 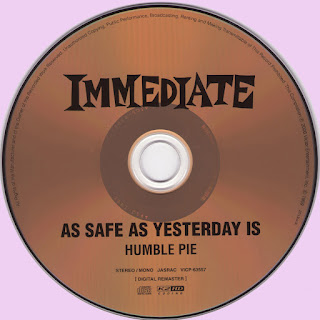 Hi Marios, Maybe you missed my chatroom comment. The single file is not working anymore. Please reup if you don't mind. Thank you as always.

I appreciate your help, Marios.

my other fave Humble Pie album...thank you...