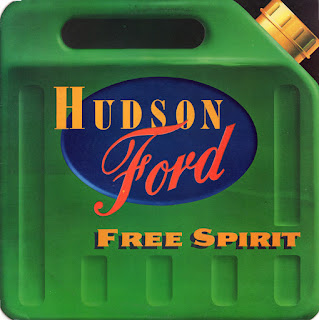 Hudson Ford was the name of the band formed by Richard Hudson and John Ford when they split from the Strawbs in 1973. Playing a mixture of folk and rock not unlike the Strawbs they had left, they had a UK chart hit with Pick Up the Pieces peaking at number 8.

The original lineup featured Hudson (playing guitar rather than drums) and Ford, along with Chris Parren on keyboards, Mickey Keen on guitars, and Gerry Conway on drums. Conway left in May 1974 prior to the recording of “Free Spirit” and was replaced by Ken Laws. Mickey Keen left the band in December 1974 and was not replaced. The lineup remained stable from that point until the group dissolved in late 1977.

Their second effort "Free Spirit' saw the light of the day in 1974, and it's a wonderful mix of classic rock, progressive folk and psych vibes, amazing guitar parts and wonderful vocals completes the puzzle of a concise work.. 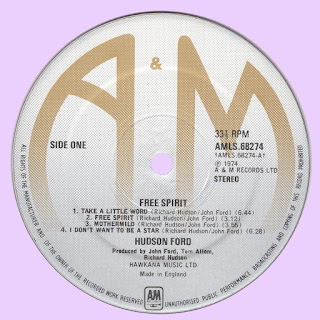 Drummer Richard 'Hud' Hudson and bassist John Ford, maybe surprisingly, left The Strawbs in 1973 to strike out on their own, although both (together and separately) have been on/off members of the Strawberry Hill Boys in more recent years. Free Spirit was their second album of four, full of the kind of mainstream rock that went out of fashion later that decade, never really returning; don't forget, these are the guys who wrote the execrable Part Of The Union for their previous band... It's not a bad album per se, just one of considerable averageness, if there can be such a thing, with probably only the mildly proggy Silent Star's stately rising string lines and the Strawbs-ish Such A Day being really worthy of note.

Chris Parren plays Mellotron on several tracks, with a so-so string part on opener Take A Little Word and a brief, if better one on the title track, although the strings and flute on Mother Mild are real. More o' dem strings on I Don't Want To Be A Star and Silent Star, complete with pitchbends of a level of smoothness of which my own machine, a few months old when this album was released, would struggle rather badly these days. I have to say, Parren's keyboard work overall stands out; his multiple monosynth parts on otherwise unremarkable closer Floating In The Wind are excellent, and he provides some of the album's best moments.

This is really amazing album,because I never had a chance to hear it before.Many thanks...Any chance for their "Nickelodeon" album?

I have this on vinyl and it's been out of print forever. Thanks Marios, this is a personal fave, so happy to get it!

Super Marios! Long time I'm searching this music. Till now not available. Thank you so much!