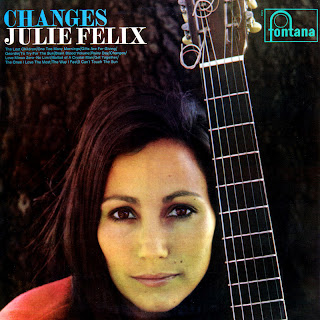 Julie Felix has come a long way since her unheralded first public appearance in Britain at a Royal Festival Hall folk-song concert about two and a half years ago. She has widened her range and her following without ever losing close contact with the folk clubs from which she draws both inspiration and strength She has been subject to the pressures inevitable when a natural singer, who sings primarily for the love of her songs and her listeners, has to sing through a screen of production techniques, to unseen millions.

She has seen, outside the clubs, the distorting mirrors of the image-makers reflecting something different from her own true self. And yet with all this she has, in fact, remained unchanged - except in a deepening of experience since Tony Geraghty wrote in the Guardian after her Croydon concert last November: "Her songs match her own integrity" What, then is this quality that has emerged unscathed from the gloss-imparting abrasives of promotion ? Directness, natural warmth, simplicity, courage, faith in her own generation. gaiety . . these are part of it.

Since that first Festival Hall appearance I have listened to her in concert halls and in dubs, on records and in private, informal sessions, and I am more than ever convinced that in this dark-haired girl from California, with her Mexican - United States heritage, the young folk revival has found one of its best, least doctrinaire, and truest representatives The implications of the continuing folk revival are clear. Industrial and technological developments have shown how fatally easy it is for the mass of people - either because they are too comfortable or too desperate to ask awkward questions - to acquiesce in the concentration of power and influence in a few controlling hands, so that culture is in danger of becoming a kind of conditioning.

The reaction to this among young people has taken many forms - beatnikry, marches, sit-downs, skiffle. Skiffle came in time to give a new dimension to the kind qf folk singing that had already long replaced the somewhat precious posturings of the evening-dress ballad-singers and was firmly established in pubs and clubs; to the revival of down-to-earth traditional songs was added the creation of songs of our time.

Youngsters, disillusioned by the acceptance world of their elders, uninspired by the in ward looking preoccupations of literary coteries. began to find a new outlet for the expression of their undirected idealism Songs began again to express the realities of the time – realities of personal relationships as well as the realities of politics - and the quality of singers to be measured by their creative involvement with the people for whom they sing ' That is one aspect of the reasons why Julie Felix has such a following A voice naturally dark and rich, containing both harsh flamenco haunting Celtic elements, with a quality of chiaroscuro that I can only describe as Goyasque,. is made directly communicative by its clarity, and beautiful by its meaningful humanity - "the ability to match vocal colour to the sense of the words", as a writer in The Times said.

She sings what she means, and means what she sings, as far removed from the folk-pedant as from the latest pop rider on the folk band-wagon. Moreover her direct approach, her profound involvement in people and her gift for expressing this as a singer have given her a special role in the current tendency towards a fusion of the folk tradition with the true "chanson populaire" a medium which the English-speaking people have hitherto left largely undeveloped as a means of voicing the quests and concerns of the day.

So much by way of introductions. Now play these "Changes" and let Julie sing for herself. and you. and all of us Listen to the way she lets the song speak for itself, the way she sings the songs of Gordon Lightfoot. Bob Dylan and Shel Silverstein, instead of turning them into production numbers; listen to the songs she herself has written, or shared in. and listen to the lovely folk-quality of "Geordie" - and. above all, listen for the sheer pleasure and fun of listening.
by Maurice Rosenbaum, July 1966 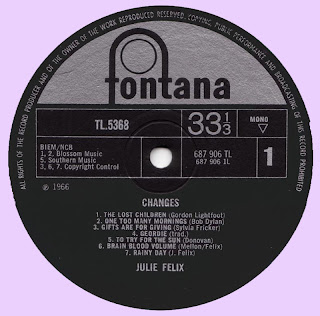 I really enjoyed 'Flowers'. I am anxious to listen to this one. Thanks very much...

Thanks A Lot For This, Julie's Very Underrated

If Changes could be uploaded I will be very grateful & thankfull / Antonius - Aruba / bosma@setarnet.aw

I bought this album during an English language course in Brighton. The year was 1969 and I was 15. I had never heard of Julie Felix but I liked the cover with a long-haired female folk singer with her guitar. I really don't remember if I knew any of the songs, maybe the name Dylan... And I fell in love with this album, listening to the songs all over again for years, and somehow it has been a part of me all these decades. Later on I learned to know e.g. Gordon Lightfoot who has written many fine songs. I always liked Julie's voice much more than for example Joan Baez's, because it is so much darker and richer. I still have this vinyl album somewhere. Now we have Spotify and everything, but there's so much good music that is almost forgotten.

Its funny how many otherwise knowledgable people outside the UK haven't heard of Julie Felix.Shes a household name in Britain.

I was surprised by the quality of this album, always dismissed her as Baez imitator....great musicians of course! By the way Ballad of a chrystal man surely is a Donovan song... not Dylan as credited.