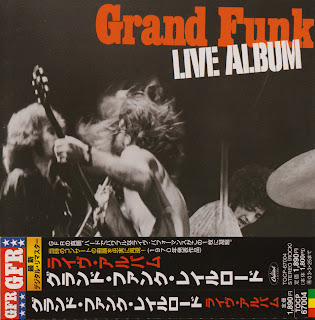 Thus starts out one of the quintessential live recordings of all time. The power trio of Mark Farner, Mel Schacher, and Don Brewer entered the 70s with all the thunder of a great storm when they released "Live Album". And that storm still resonates.

The remaster of "Live Album" is a grand art, it opens up the sound. It realizes the textures of the show by emphasizing the instruments. Schacher's bass is clearer and produces the growl that it was meant to. The drums' pounds are good but a little distant. Fairly, this is a concert setting. But to hear Farner's vocals as cleanly as we do here along with his guitar leads is a plus. Listen to the extraordinary "Inside Looking Out" and the change is unreal. GFR played music for their fans.

That love dedication is revealed on this album of material recorded during mid June,1970 at several Florida arenas. With an energy level of a nuclear reactor, the disc captures the heat of the times and documents it for all time. Secondly, Grand Funk was the essence of Rock. Listen to any of the tracks and you realize that Farner and the boys understood what great music was and better, how to produce it. Mixed with socially conscious lyrics, GFR became the voice of an age.

From the drum solo sweat machine of "T.N.U.C" where Brewer toils forever with a fevered intensity and produces the drum solo of all time that has never been beatened. With the rigid bass of Mel Schacher and the utilitarian Guitars/Keys/Vocals of Mark Farner, Grand Funk also produces the timeless "Heartbreaker", "Mean Mistreater", "Inside Looking Out", and other GFR classics that have defined the era's concept of great rock music and what it was all about.

Grand Funk have had their share of troubles and came out of them stronger. They went on to produce fantastic studio discs that cemented the status of the band forever in the annals of rockdom. Many of those discs are in the "Grand Funk Remasters" series.

The disc has a different song sequence than what you may be used to. This is because of the intent to adhere to the original progression of the shows. This does not hurt the reproduction but is an added bonus for those who have seen these shows. Suits me.
by Matt Rowe 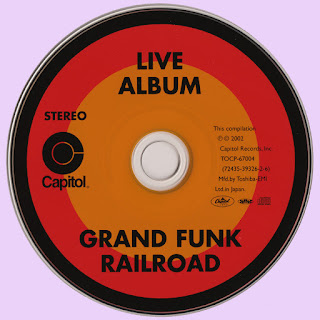 Free Text
the Free Text
Posted by Marios at 3:56 AM

I remember buying the LP and the fascinating artworks that I would look over and over again. The LP sound quality was a disappointment to me though so here's to hoping this Japan release will move me one more time. Many thanks, Marios.

Many thanks, Marios. I've fixed the problem by saving the files to the hard drive rather than open it when DL is finished.

Thank you Marios for this great album. Nothing wrong with the links, the files are alright. Perfect post.

A classic. Thanks very much...