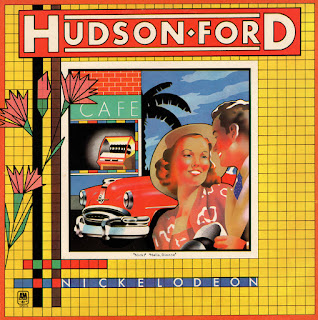 Hudson-Ford,  were sadly underrated and largely ignored by the pop music buying public. Why? Couldn't tell you. Not any particular reason you could put your finger on.

Bear in mind this is the mid-1970's, Hudson-Ford were a good and competent band, with good song writing skills and good production, they failed to click with an audience who were just getting tired of what was available, certainly in mainstream.

The sound of Hudson Ford, though, ranged to glam, with a occasional nod to their electric folk past. Their roles broadened as well, with Hudson leaving the drums to others in order to focus on singing and lead guitar, and Ford expanding his vocal and acoustic guitar duties.

The debut album "Nickolodeon" was bolstered by the presence of Rick Wakeman and other studio sharpshooters, the sounded more country/folk than their following albums with well writing tunes, they  scored a hit in the U.K. with the single "Pick Up the Pieces." 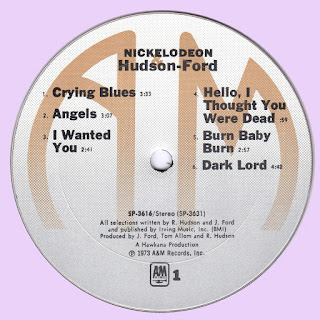 Free Text
the Free Text
Posted by Marios at 7:03 AM

I'm so glad to see this album.Now I can replace my old Mp3.Good music from start to finish.Extra thanks...

I think one reason they were ignored was there was a lot of similar stuff around but better and not much promotion. I bought my copy from Phil's in Rupert St, London, DJ copy.

I to am anonymous.

Hudson Ford were a UK rock band-style duo, formed when John Ford and Richard Hudson left Strawbs in 1973. The original lineup featured Hudson (now playing guitar instead of drums) and Ford along with Chris Parren on keyboards, Mickey Keen on guitars, and Gerry Conway on drums. Conway left in May 1974 prior to the recording of "Free Spirit" and was replaced by Ken Laws. Mickey Keen left the band in December 1974 and was not replaced. The lineup remained stable from that point until the group dissolved in late 1977. The next Hudson-Ford project was in 1979 they re-surfaced billed as The Monks.

Hudson-Ford had initial chart success with "Pick Up The Pieces", but sadly failed to consolidate this with later singles. Originally intending to call themselves Johnny And The Acoustic Kid, their first album Nickelodeon was recorded with various sessions men, including Rick Wakeman. Micky Keen (gtrs), Ken Laws (drums) and Chris Parren (keyboards) also played, later to join the Hudson Ford band which recorded the next three albums. Tom Allom, Strawbs' producer, carried on in the producer's chair for Hudson Ford for the A&M albums, being replaced by Robin Geoffrey Cable for the CBS album, though one track on that was produced by Jeffrey Lesser and Rupert Holmes, who were also producing the Strawbs at the same time.

Considering Hudson-Ford's Strawbs background and that former band mate Rick Wakeman appears here, you will be forgiven expecting 'Nickelodeon' the pair's first album to be a progressive rock extravaganza, but it's not even close. This record follows the same path as Paul McCartney & Wings, Blue and 10cc. In other words; well written and perfectly executed British pop and 'Nickelodeon' is the bookend to Wings 'Red Rose Speedway' released the same year. A stunning record with a clutch of great songs including 'Angels', the catchy 'Burn Baby Burn' which was deservedly a hit single as well as 'Pick Up The Pieces' which also received significant airplay. As good as this record is the best tracks are saved for the end. The beautiful and all too short 'I Don't Understand' and the heavily Beatles influenced 'Revelations' which sounds like a 'White Album' outtake is nothing short of brilliant.

Wow, one of 4 albums of Hudson & Ford. Greatful, wondderful! Thank you so much, Marios for this album!!!

Struggling with the passwords on the two HF albums.
Can anyone help?