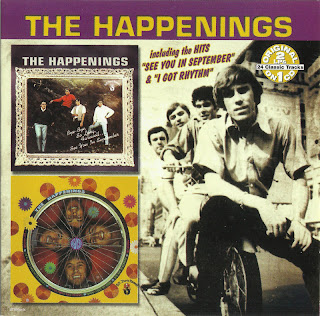 "The band was gifted with a flair and a half for harmony pop, especially that of the good old fashioned barbershop quartet variety."

From Paterson, New Jersey came The Happenings, who encountered a quick flash of glory in the sixties before getting bumped off the radar by the more progressive acts of the era. The band was gifted with a flair and a half for harmony pop, especially that of the good old fashioned barbershop quartet variety.

However, they updated their sound just enough so it wouldn't be too horribly quaint for the kids to digest. Such spine-tingling vocal prowess can be experienced on these two albums which have been shoehorned into one compact disc.

Released in 1966, "The Happenings" deposited a pair of rock solid hit singles with "See You in September" and a copy of Carole King and Gerry Goffin's "Go Away Little Girl." A cluster of Tokens compositions such as "Tonight I Fell In Love," "You're In a Bad Way," "What To Do" and "Tea Time" line the album as well.

And that makes complete sense because not only did the evergreen doo-wop group handle the band's affairs and produce their work, but The Happenings were also signed to their label, BT Puppy Records. Decked out in a freaky jacket cover that belied the characteristically polite music housed inside, "Psycle" was issued in 1967 and included "I Got Rhythm" and "My Mammy," both which clenched the national charts. The album suggested The Happenings were attempting to stretch boundaries a bit, as snippets of the material are trimmed with jazz and blues inclinations. But the band refused to pretend to be something they were not, and all told, "Psycle" teems with concise harmony pop configurations.

The Happenings excelled at this style of music so why change their image? Although the band never broke any real new ground, their contributions to the golden age of teen radio should not be underestimated.
by Beverly Paterson 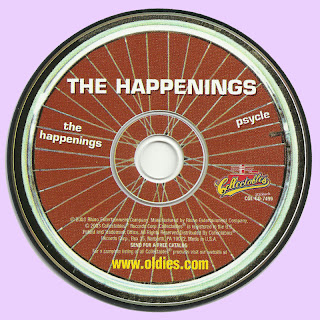 Free Text
Text Bin
Posted by Marios at 4:30 AM

Members of the original group, created in 1965, all hailed from Paterson, New Jersey and consisted of Bob Miranda, David Libert, Tom Giuliano and Ralph DiVito. In 1968, DiVito was replaced by Bernie LaPorta. Lenny Conforti also joined at this time to play drums in the tour band. Both LaPorta and Conforti took a hiatus from the Northern New Jersey band The Emerald Experience to play and tour with The Happenings. The band continued in this present configuration, performing mostly at colleges and universities until 1970, when Libert left the band to pursue other endeavors within the music industry. The band still exists and continues to perform with lead singer Miranda as the only remaining original member,in the '90s, Miranda formed a new version of the Happenings, playing out live alongside members Bob Kulik and George Rizzi.

The '60s pop outfit the Happenings enjoyed a three-year run of several hit singles late in the decade. Soon after, the Happenings began scoring hit singles, including such number ones as "See You in September" and "I Got Rhythm," as well as other moderate hits ("Go Away Little Girl," "My Mammy," and "Girl on a Swing," among others). In addition to their singles, the Happenings issued several full-length recordings, including 1966's self-titled debut, 1967's Psycle, and 1969's Piece of Mind.

They performed on such popular TV shows as The Tonight Show With Johnny Carson, The Smothers Brothers Show, and The Merv Griffin Show, and shared the concert stage alongside such notables as the Beach Boys, Roy Orbison, Joan Rivers, John Denver, the Drifters, and the Kingston Trio, among others.
The biggest hits:"See You In September" and "I Got Rhythm" were on the Billboard Hot 100 Singles charts for 14 weeks in 1966 and 13 weeks in 1967. (Following the September 11, 2001 terrorist attacks, "See You In September" was listed in a memo containing 150 songs that radio conglomerate Clear Channel Communications suggested to be pulled from the airwaves - despite the fact that the song is about two lovers saying goodbye for the summer, and has nothing to do with terrorism.)

Thank you so much, Marios! Long time I'm searching this albums. Not easy to find!

Hey there! Link-safe page is not working anymore. Can I ask for re-up? Thanks!

This is excellent music, though more commercially oriented than other offerings here on Rockasteria.

Thanks for sharing this gem of a record.

I am Mike LaNeve's brother-in-law. He was married to my sister Debbie when I was about 9 back in 1970 or so. They had two daughters Dina and Morgan. Morgan has a drum set from M8ke and can still play. She has 4 boys and Dina has worked with challenged children, a commendable profession. He taught me how to play drums At a young age. I saw him play many times at his father's restaurant LaNeve's in Haledon, NJ. His dad Angelo was a nice man and let me work at the restaurant.
Mike died in January of 2093 from pulmonary complications due to his hypothyroidism. He was a good man.
Thanks for reading and paying respect to Mike.
Charles 626 826 3815