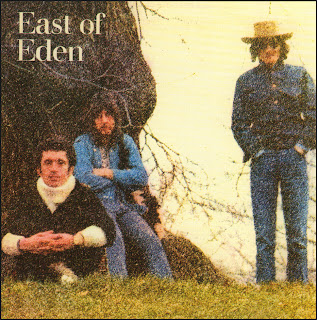 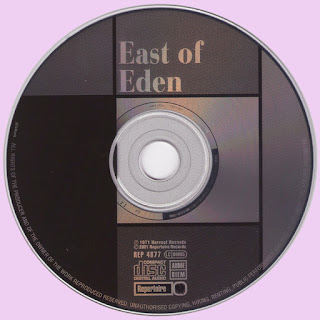 Free Text
Text Bin
Posted by Marios at 8:00 AM

Nice choice ! Many thanks...

Yes, these were different times, and music was music. But things go their own way. I am more than proud that my children know what is a music of quality.

EAST OF EDEN East Of Eden Group was founded in 1967 in Bristol (initially, the group appears under the name of The Picture of Dorian Gray, but under influence the book, Steinbeck, which the musicians had the opportunity to view, change its name to East of Eden.) by multi-talented multi-instrumentalist Dave Arbus, and the first of its composition, besides the leader, found the saxophonist Ron Caines, Geoff Nicholson, guitarist, drummer and bassist Dave Dufont Steve York.... in the years recorded 1968' for a small Atlanticu debut "King Of Siam" / "Ballad Of Harvey Kaye." After changing the publisher of Deram in 1969 the band recorded the album "Mercator Projected", which won considerable popularity and earned favorable reviews from critics.
Soon, East Of Eden, already with a new rhythm section: Andy Sneddon instead of Steve York (who was bass player Manfred Mann Chapter Three) and Geoff Britton for the drums, he recorded a second LP entitled "Snafu". He appeared on the market in 1970. The single and the band released their catchy instrumental track "Jig-A-Jig", which in April 1971, reached the 7th place on the British charts and was listed on them for 12 weeks. Soon after, Dave Arbus, David Jack, Jeff Allen and Jim Roche's colleagues had left Dave Arbus, who recruited into the new East Of Eden bassist and vocalist David Jack, guitarist Jim Roche(the first guitarist Colosseum)and drummer Jeff Allen (formerly of Beatstalkers).
The team moved to the Harvest label and released him in 1971 the album "East Of Eden"almost completely abandoning psychedelic or jazz follies known from earlier albums, and focusing on playing a bit heavier but not shunning from the folk style. Of course it is still a racial progressive - lots of attractive violin, flute,saxophone, and sounds guitar.
Unfortunately, the old fans were apparently discouraged by the new, more commercial face of the formation and the album went unnoticed. This has led to discord in the bosom of the group and numerous personnel shifts....East of Eden Music can not be defined, defies all attempts to pigeonhole.
Certainly the work of this team is the essence of progressive rock, a combination of heavy rock, jazz, oriental music, classical and folk.
So shake off your gloomy image and give life a chance, or at the very least, give East of Eden one.
The final solution is the group in 1978 ... but in 1997 the musicians once again gather and record two albums ("Kalipse" 1997, "Armadilo" 2000).
The year 2005 brings the next release, the album "Graffito"

Thank you friend, always fantastic music in this site. Very good post. All the best.

Anyone have It's The Climate or the 2014 reissue of Here We Go Again!