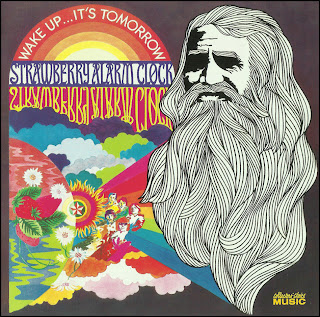 When the Strawberry Alarm Clock recorded their second album, they were facing the challenge of trying to sustain the remarkable and sudden success of their classic psychedelic debut single, "Incense and Peppermints," which hit #1 on November 25, 1967. Their debut LP of the same name had also done well, rising to #11 in the album charts with its mix of California harmony pop, garage rock, and raga-influenced psychedelia. Wake Up...It's Tomorrow would diversify yet further, adding more sophisticated vocal arrangements and flitting between flower-pop, fuzzed-out psychedelia, and a three-song suite of sorts with sitar and backwards effects. It also yielded their only other Top 40 hit in the semi-title track, "Tomorrow," an effervescent psych-popper that sounded rather like a more psychedelic Association.

There were also some changes from the band that had recorded the earlier Strawberry Alarm Clock material. The unusual six-man, two-bass lineup in place for the first album proved to have one bass player too many. One of the bassists, Gary Lovetro, departed, getting bought out of the band for $25,000 and leaving the position in the hands of George Bunnell. "It is physically impossible to get a clear bass sound with two bass players on stage," explains keyboardist Mark Weitz. "Even though he was one of the original members [dating back to the days of Thee Sixpence, the band that evolved into the Strawberry Alarm Clock], we felt his interest in the band was more business-oriented than contributing musically.

Sometimes [guitarist] Ed [King] had to do the bass parts in the studio for Gary. He just didn't have enough talent to conceive a good original bass part." Virtually absent was high school student Steve Bartek, who'd contributed to the songwriting on the first album as well as playing some flute and other instruments, although he was never officially in the band. As Weitz notes, "Steve was only fifteen or sixteen years old. He was a high school friend of George. I think George tried to get him to join the band, but his Mom wouldn't let him -- I didn't blame her. He was a little too young. Steve was exceptionally gifted in his playing -- too bad." Bartek did write the music for one of the tracks on Wake Up...It's Tomorrow, "Sitting on a Star," but as Bunnell notes, "Unfortunately, with me on tour and Steve still in school we weren't writing together. In fact, we didn't resume our co-writing until 1969, after I had left the SAC."

The recording process would be different this time around as well. "Our first album sold well (250,000 copies), we had a nationwide number one record!" exclaims Weitz. "The first album was written quickly, recorded all in one week on a small budget at Original Sound studio on Sunset, in Hollywood. Some of the songs were worked out in the studio right before recording! It was recorded in a low tech studio, we were all feeling each other out. We had not had a lot of experience playing together yet, especially in a studio environment. After we completed the first album, we became a little more sure of each other. Also, at that point, we knew who was more musically talented and who was not, as far as contributing to the overall ideas of our sound. UNI [Records], I guess, was willing to spend more on the second album, in a better studio (TTG) with better equipment and sound. That led ultimately to a better all-around-sounding album. By then, we had played on the road together, we were just more polished, and getting tighter."

Adds guitarist Ed King, "All of the songs for the second album were written in the studio; in other words, they were barely rehearsed and the material wasn't played to a crowd. I played bass on all the songs that I wrote, and George Bunnell played bass on his songs." Other big changes were the Association-like vocal arrangements, devised by vocal coach Howard Davis, who Weitz thinks was brought in by the band's manager. "He was a great guy in his fifties that played piano and sang nightly at a bar in Montrose, California. His voice can be heard [doing the spoken section] in 'Nightmare of Percussion.' He was the main source of most of our three- and-four-part harmonies. That was another MAJOR influence in our sound. He had a great way of being patient with us while we rehearsed some pretty difficult stuff; none of us had previous harmony training as far as I know. Our 'patented' Strawberry Alarm Clock vocal sound was mostly, but not all, Howard Davis arrangements."

While the mixture of styles on the rest of the album testified to band's eclecticism, Weitz agrees it might have worked against the establishment of a consistent band sound and identity. "I think one of the problems was in the beginning, we would all write together. Now band members were splitting up into writing 'cliques' or writing partners: Ed and [rhythm guitarist] Lee Freeman, [drummer] Randy [Seol] and George, myself and sometimes Ed. I guess each of our styles of writing was going off in different directions -- not on purpose, it just happened.

A form of competition was developing in the wind...and notwithstanding the constant distraction of our producer, manager and record company execs always telling us what WE should do and HOW we have to sound musically to succeed. 'Trying to do it their way' was hindering our true musical direction, and we were not allowed to flourish on our own....whether we would have succeeded or flopped, at least we would have done it 'on our own.' We were always willing to take that chance all along, but were  constantly being directed by the powers that be. We were afraid to react negatively for fear of UNI's rejection, and the ultimate end of our careers as the Strawberry Alarm Clock. So we went along with just about everything they wanted us to do, even if it meant failure.

Aside from "Tomorrow," the song that got the most exposure was "Pretty Song from Psych-Out," which was used in the notorious Dick Clark-produced Haight-Ashbury psychsploitation movie Psych-Out, starring Jack Nicholson (as guitarist of a fictional psychedelic rock band!). "We were invited on the Dick Clark show playing our #1 hit record," remembers Weitz. "Some time shortly after we performed on his show, I think he asked us to be in a movie he was producing. He also asked us to write a theme song for the movie, which was Ed and Lee's creation from start to finish." King's involvement didn't stop there: "I was assigned the job of sitting down with Jack Nicholson and teaching him some guitar stuff for the movie. The director wanted him to look like he was really playing. Jack really didn't want to have much to do with it!"

The album's diversity was also a reflection of the different tastes and, to some degree, tensions within the group. "Mark and I didn't care for Randy's taste in material," confesses King, "so the ['Curse of the Witches' and 'Nightmare of Percussion'] songs were pretty much recorded under protest. ['Nightmare of Percussion'] was a Bunnell/Seol tune, and they needed Howard [Davis]'s really deep 'thick' voice to complete the song, so they included him as a writer. It was their song, they arranged that with him. I liked Lee's lyrics very much, but didn't want him playing guitar on anything. As it turned out, Lee became a very good guitar player. But I think, during the Alarm Clock days, he was preoccupied with being a teenager. I was preoccupied with learning how to play that damn guitar."

Rather surprisingly, considering the band were still riding the momentum of "Incense and Peppermints" and also coming off a decent-sized follow-up hit single in "Tomorrow" (as well as touring with the Beach Boys and Buffalo Springfield in late 1967 and early 1968), the album failed to reach the charts. King lays some of the blame on the poor timing of the LP release, feeling that it came out way too late to capitalize on the success of the "Tomorrow" single, which was released a month before the album on which it was featured was even recorded. Weitz thinks UNI had already dropped the ball on the "Tomorrow" single, noting that "their record distribution nationwide on 'Tomorrow' was really slow and too late for the fans. It just wasn't promoted. We would play in a small town in the south, and the records weren't in the stores yet.

How could you sell records on tour if they're not in the record stores when you were there to promote them and play at a concert? Also our manager, Bill Holmes, put up a barrier to UNI and prevented them and other promoters from helping us. That was a big problem for us. Holmes was afraid of losing control of 'his' band, which probably backed down UNI, [the booking agencies] William Morris [and] Premier Talent, and others from promoting us more seriously and to the fullest. Holmes's possessiveness hurt us deeply. That alone was a huge hindrance to us moving forward in our careers, I thought." It didn't keep the Strawberry Alarm Clock, however, from recording quite a bit more material in the late 1960s, including two subsequent albums -- both now available on Collectors' Choice Music as CD reissues, on which the story continues.
by Richie Unterberger 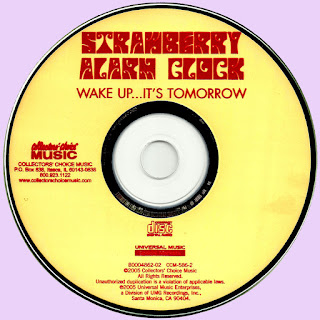 Strawberry Alarm Clock is a magical band, i have their dreamy first album (Sundazed lp reissue) and i'm waiting also a vinyl reissue for this one, for fully appreciate the cover art. Thanks a lot Mr Marios.

Thank you very much, sir! Your blog is an endless goldmine and I'll never get tired of diggin' it!

Thank you for placing this recording on your site Marios.

It's a superb album, Nightmare Of Percussion and They Saw The Fat One Coming being particular highlights.

It has been many years since it was originally posted, I just now saw it. Is there anyway possible it could be re-upped, please? Thank you very much, either way as you site is fantastic.

Thank you very much for this fine album.