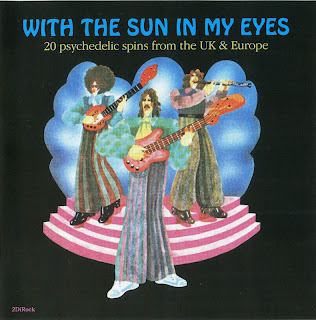 Recently I read a letter in a prominent music magazine from a reader who was getting rather steamed about what passes for psychedelia in these ordered times. The gist was that tons of prog, POP, folk, soul and Jazz is now labelled psych, and that in reality, when placed in it's historical context, very little of it actually is psychedelic at all.

Chronologically, psych, in the true sense of the word, was all but over by 1970, but of course, there is no marked line where one day it all iust stopped. I think, with hindsight, it is possible to label things ‘Psych' out of its traditional timeline if the sound is there, but I do take the point. So much of the material pushed as 'mind-frying Psych' is nothing of the sort.

When one considers what a short period the first flush of psychedelia enjoyed, it is easy to see why anything vaguely trippy has been lumped in with the real stuff. There Just isn't enough to go round. 'With The Sun In My Eyes4 is Psychic Circle's first compilation of UK & European straight psychedelia. It's taken 'til our 12th issue because tracking down 20 proper, uncomped psvch tracks from the UK is now no easy task. However, I feel sure that our listeners will not experience that feeling of disappointment when the new 'acid-drenched' comp contains two or three corkers, ten tracks you've heard before and half a dozen weedy POP outings.

The idea behind these comps has always been to share great music and recognise that our market is mainly made UP of People with a deep knowledge and love of this kind of music. I feel confident that this will be appreciated when you give 'With The Sun In My Eyes' an airing. If this pre-amble has a somewhat dour tone, please don't be misled, we're really proud of this comp.

I personally think it's one of our strongest. I could tell you it's going to warp your synapses or crystallize your cerebral corteces, but I can almost hear the stifled laughter, so I'll leave that to someone else. I'll just say that in my opinion this is a really nice comp and I hope you'll find some new Pleasures on it, and rest assured, we're out there tracking down material for the next one.
by Nick Saloman 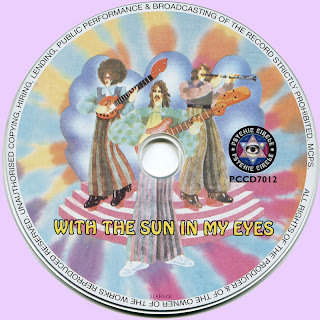 good to see hungarian groups here. Omega was fantastic in the late sixties.

Thanks Marios for this one, I don't know where I got a Lossy copy before...

Anonymous, "With The Sun In My Eyes: 20 Psychedelic Spins", reposted..