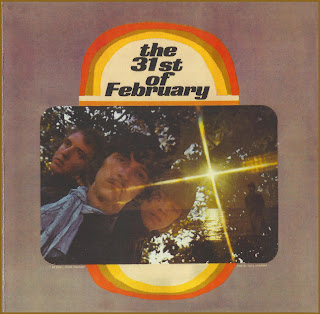 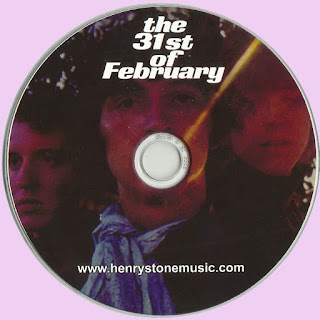 Free Text
the Free Text
Posted by Marios at 10:30 PM

It's kind of sad and outright erroneous that when this short-lived outfit is mentioned by collectors, it tends to be as little more than a footnote in a conversation that focuses on The Allman Brothers Band. That's made even more ironic by the fact that while Duane and Greg Allman contributed material to the The 31st of February's planned second LP, they were never formal members of this outfit. That tentative connection to the Allmans also overlooks the band's considerable talent, to say nothing of the members subsequent successes - Scott Boyer going on to the band Cowboy. David Brown serving as bass player for Santana. And yes, yes, Butch Trucks played drums for The Allman Brothers Band ...

Singer/guitarist Scott Boyer, bassist David Brown, and drummer Butch Trucks met in 1966 while students at Florida State University. Discovering a mutual interest in music the trio decided to form a band. Borrowing a page from The Byrds folk-rock catalog, as The Bitter Ind the three started playing parties, dances, and clubs. They quickly graduated to local clubs and eventually scored a recording contract that saw the release of a one-shot single for the small Memphis-based ACP label:
- 1967's 'Hands Are Only To See' b/w 'Baby Blue' (ACP catalog number 380)
That 'success' led Boyer to drop out of school with The Bitter Ind subsequnelty morphing into The Tiffany System. Under the new name the trio started their recording careers with an instantly obscure single for the Florida-based Minaret label:
- 1968's 'Let's Get Together' b/w 'Wayward One' (Minaret catalog number MIN-128).
While the single did little commercially, by 1968 the trio had generated a large following in their native Jacksonville, Florida. Opting for yet another name change they relocating to Miami and as The 31st of February (anyone know the significance?), signed a recording contract with the Vanguard Records.
Co-produced by Steve Alaimo and Mike Shapiro, 1969's "The 31st of February" has always struck me as an undiscovered gem. Performed with considerable enthusiasm, the collection was varied and energetic. Boyer had a great voice, that occasionally reminded me of a more commercial Greg Allman, perfectly suited for the band's excursions into Byrds-styled folk-rock ('Porcelain Mirrors' and 'A Different Kind of Head'), progressive ('Treason') and psyche ('A Nickel's Worth of Benny's Help'). Elsewhere, the standout tracks may have been Brown's stomping 'Wrong' and the trio's ghostly cover of Buffy Sainte Marie's 'Co'dine'. Among the few missteps; Brown's 'Broken Day' was a little too sensitive singer/songwriter, while the band's cover of Jackie DeShannon's 'The Greener Isle' (good taste in outside material), came off as MOR (blame Shelby SIngleton's overwhelming string arrangement). Unfortunately, the set generated little in the way of sales.
Following the collapse of their own band Hour Glass, Duane and Gregg Allman returned to Florida. Having known Trucks for years, they helped The 31st of February record material for what was planned as their sophomore release. The project never saw the light of day as internal disagreements saw the band fold in 1969 at which time the tapes were shelved. Drummer Trucks then joined the newly formed Allman Brothers Band and following Duane Allman's untimely 1971 death, the Florida based Bold label somehow acquired the tapes releasing the material as a Duane and Greg Allman album - "Greg and Duane Allman".
Marios, Thanks for the share

Thanks,Marios!This my a secret band!

Thanks for this great installment! One of the rarest pieces to the never-to-be-solved psychedelic puzzle.

According to Fuzz, Acid & Flowers this is "an album that has some rewards for the patient listener" and i second that.
Many thanks for posting! :-)