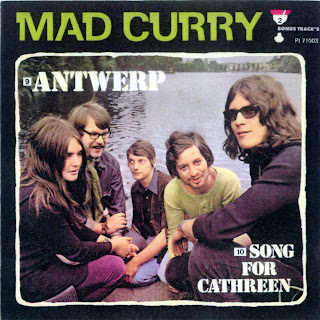 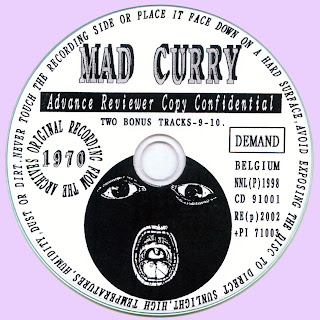 Free Text
Free Text II
Posted by Marios at 9:37 AM

One more from this great site.
And thx again and have a nice weekend!

Yes, and after listening of few songs definitely Curved Air comes to mind. A little more rhythmic one.
Which is not bad at all...

many, many thnx, GREAT prog from Belgium

Really good album, I've listened to this one.

Never heard before.
Thx from Paris

Really a superb album! Thanks!!

Mad Curry was a Belgian band which had this remarkable line-up for a rock band: Sax, organ, bass, drums and vocals. No guitar appeared in their ranks. Their sound can be described as ‘progressive jazz rock’

The band was founded in early 1970 during one of the countless jam sessions held in Leuven, a Belgian university city once called the Liverpool of Belgium.

Eddy Verdonck and Jean Vandooren had played together as rhythm section since they were 16.

Danny Rousseau has a degree in music and writes fluently paper music scores. He played together with Jean Vandooren and Eddy Verdonck in CTS, a band that recorded a live album. However after trouble with their manager the LP stayed unreleased and CTS called it a day.

Viona Westra recorded one single before Mad Curry as a result of being chosen in ‘Ontdek de ster’ a television contest on Belgium TV. She also sang in some blues bands.

Giorgio Chitschenko came from the Belgium jazz scene. He also has a degree with a first prize in music at conservatory.


They gave up their studies and jobs to rehearse intensely behind closed doors for 6 months, before they played their first gig. Meantime they invited Bob Leonard at a concert in an Antwerp youth club. He was so impressed he & Louis De Vries offered a contract. Louis De vries was active with ‘underground’ bands, and who even organized the first Belgium Pink Floyd gig in a local Antwerp café. He was also manager for Pebbles, Irish coffee, Ferre Grignard, Louisette, etc. Later he became ‘famous’ for being a football manager!

The first release was a 7" single with the tracks: ‘Antwerp’ regarded as their most commercial track and ‘Song for Cathreen’ a song written by Giorgio Chitschenko & Viona Westra and dedicated to Giorgio’s then new-born daughter Katrien.

A few months later an album was released on the Pirate label.

The record is characterized by repeated time signatures that give a 'progressive' feeling. Sax and organ bring a specific jazzy element in the performance and the unique high bluesy voice of Viona is very recognizable. All this supported by a solid rhythm team which gives a rock sound. The album was housed in a beautiful very original fold-out cover made by Jef Winnepenninckx. He knew Mad Curry from local café’s in Leuven like The Harp, Seven ox, etc..
He says now, his inspiration for the cover was a spur of the moment. But the cover represents the craziness of the music. It was his first work he made as a designer. These days he is a professor at St Lucas art school in Brussels. The band played many concerts in Belgium, France & Holland. The Paradiso gig in Amsterdam was regarded by some members as a ‘highlight‘. The ‘success’ there was because of the fact that everybody was lying stoned on the ground after the gig ended!

A second album was written & prepared. However the touring and personal conflicts took their toll and in mid-1971 Mad Curry disbanded and the second album stayed unrecorded.

wow, just found this one and crystalline in the vault, very impressive, both these bands well worth a listen. many thanks for the listen.