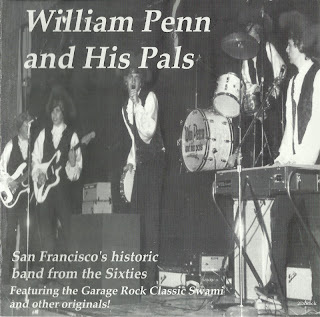 Also known as the William Penn Fyve on many bootlegs. It's been a long time coming, in fact about 35 years. This group was formed in 1965 and extinct by 1968. They were one of the most famous groups in The San Francisco Bay Area at the time and their name was all over Radio KYA, KFRC and KLIV as opening act for the biggest national and international acts as well as headlining their own shows.

The lineup boasted Mickey Hart (for a brief period) of the Grateful Dead and Gregg Rolie of Santana/Journey fame was a full time member for 1 1/2 years before he started a group with a dude name Carlos Santana. Gregg sings lead on all but one of these songs.

Wm. Penn used to go toe to toe in Battle of the Bands with the Grateful Dead and recorded one of the most famous Garage Rock Classics by the name of Swami. Swami appears on at least five bootleg compilations along with the flip side.. Blow my Mind. The group changed it's name briefly to Wm. Penn V for Swami (actually it was William Penn Fyve but Pebbles called them William Penn V since they were/are bootlegging Swami) and there is some confusion as to whether William Penn and His Pals was in fact the same Wm Penn Fyve; they were.

Other songs have appeared on "The Scorpio Record Collection" put out by Ace/Fantasy. Finally all the songs of this classic group are available to the public in one professionally manufactured CD with 8 pages of facts and photos. There are even a few gems that nobody except a select few have heard. Here are clips from all of the songs on the CD so you can get a good sample of what you will get. Hearing these songs is almost like being at an show in the 60's at The Longshoremans Hall in San Francisco.

Besides the wonderful songs the liner notes include the original copy from San Francisco's I.D. magazine with the run down on Wm Penn and his Pals written by their manager. You must read this to get the full scope of just how popular this group was. 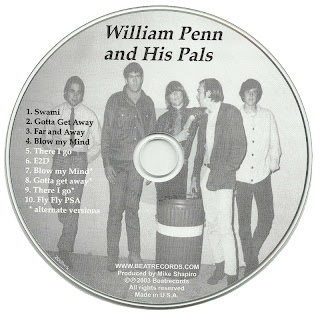 Free Text
Free Text II
Posted by Marios at 6:07 AM

Usually I pass such albums, but this time I listened to the attached sample of their music. And it sounds great. I hope that the rest of the album is similar to this one.
Thx again...

'Swami' is a real classic mid-sixties US garage track. Thanks very much...