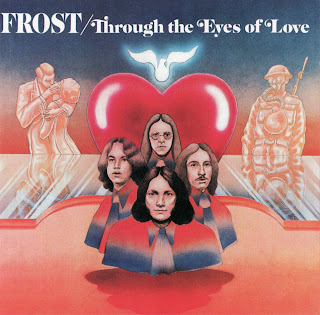 Frost’s final and, in Dick Wagner’s opinion, best album, “Through The Eyes Of Love”, was released in 1970. The album contained seven great songs including two, Wagner’s “Black As Night” and Donny Hartman’s “Fifteen Hundred Miles (Through The Eye Of A Beatle)”, that had been originally recorded at the Grande Ballroom but left off of “Rock and Roll Music”. Despite the overall quality of “Through The Eyes Of Love”, the Frost again fell victim to Vanguard’s lack of support and the album sold poorly.

Wagner related in an interview in 2003 that when the Frost went out to San Francisco to open for B.B. King at the Fillmore West in support of their new album, the crowds loved them but everywhere they went their records were nowhere to be found. Vanguard had sent no representatives to support them, so without vital label promotion no one in the cities they were playing in knew anything about the Frost. Band members felt that their record label had let them down and that they were basically on their own. This in turn resulted in resentment and a loss of group morale.

According to Wagner, the end came when drummer Bobby Riggs became upset that the band wasn’t getting the adulation on the road that it routinely received in Michigan. At the start of a tour of Canada, Riggs decided he no longer wanted to continue, and he left the rest of the group in Toronto and flew home. Wagner had to cancel the remaining shows, and that signaled the demise of the original Frost. Hartman and Riggs later tried to rekindle the Frost in 1971 and 1972 with new bassist Rick Bozzo and keyboardist Robin Robbins, but without Wagner and Garris, the band was only a pale shadow of its former self.

After the Frost break-up, Dick Wagner traveled to New York where his manager pitched him the idea of joining a band he was putting together called Ursa Major.

Originally, Billy Joel was to be the keyboardist in the trio. Joel at that time, however, was undergoing some severe emotional problems and had to drop out of the project. Wagner recruited bassist and keyboardist Greg Arama from Michigan’s Amboy Dukes to fill the void. Dick Wagner then took over leadership in the band and wrote all seven songs for the band’s self-titled debut album, “Ursa Major”, produced by Bob Ezrin.

Although the album received positive reviews and Ursa Major toured as an opening act for both Alice Cooper and Beck, Bogart & Appice, the album didn’t sell and the band dissolved. Wagner was then called by producer Bob Ezrin to play guitar on some Alice Cooper sessions. Dick played uncredited on the “School’s Out”, “Billion Dollar Babies” and “Muscle Of Love” albums and established a close friendship with Alice.

After the break-up of the original Alice Cooper band, Cooper decided to go solo and Wagner was brought in to help Alice write a ‘concept’ album. The two went to Nassau in the Bahamas and eventually came up with ideas and songs for the “Welcome To My Nightmare” album. Wagner and Cooper settled into a songwriting partnership in which Dick would compose the music and Alice would come up with the lyrics. The album’s big hit single was a ballad called “Only Women Bleed”. Cooper changed the words to a song Dick had written back in 1968 called “I’m Moving On”. Released as “Only Women”, the single was a huge hit and it helped propel the ‘Welcome To My Nightmare Tour’ into one of the biggest and most successful rock productions of the 1970’s. The tour’s elaborate stage show, which featured both Dick Wagner and Steve Hunter on guitars, set the standard for Rock and Roll theatrics.

The songwriting partnership between Cooper and Wagner flourished for the next few albums before Alice’s alcoholism got the best of him. The pair collaborated on three more hit big singles in the late 70’s, “I Never Cry”, “You And Me”, and “How You Gonna See Me Now”, before Cooper was institutionalized for his drinking problems.

Since that time, Dick has done some solo projects, wrote hit material for Air Supply, worked off and on with Alice Cooper, and joined John Bradshaw in the Remember The Child project. He returned to Saginaw in the 1990’s and opened his own recording studio. While in Saginaw, Wagner performed his Remember The Child music with John Bradhaw, the Saginaw Bay Symphony Orchestra, and a gospel choir during a memorable outdoor concert on the Campus of Saginaw Valley State University.

Donny Hartman lives in Northern Michigan and performs and records with the Donny Hartman Band. Bobby Riggs has played with Wagner and Hartman in several Frost reunions, and he recorded the CD single, “This Band Can Rock And Roll Forever/In The Middle Of The Night” with them in 1999 as part of the Frost 30th Anniversary Tour. After the Frost, Gordy Garris played in Whipeye and then in the Gordy Garris Band. He continues to be involved in music as a songwriter, but he has not participated in the Frost reunions.

In 2005, Dick Wagner closed his Saginaw recording studio and moved permanently to Phoenix, Arizona. In 2007, he suffered a major heart attack. Happily, Dick is on the road to recovery, and he is playing guitar again and producing a new artist called Wensday for his independent label Desert Dreams Records. Wagner has recently been working with his old guitar partner Steve Hunter, and there is a possibility that Dick and Alice Cooper may write together again in the near future.

Frost was voted into Michigan Rock and Roll Legends in 2008. "Mystery Man" was voted a Legendary Michigan Song in 2010. 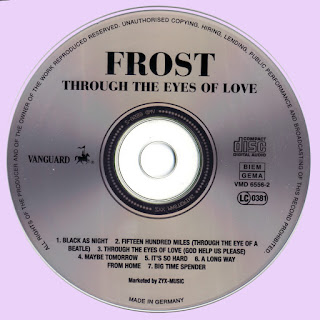