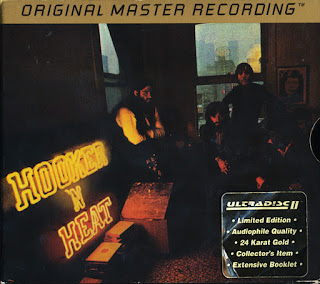 Canned Heat are hands down the best back-up band John Lee Hooker has recorded with since those hot shot country groups that blazed anonymously through the studios in the early Fifties. And despite the cover billing, they are very much a back-up group, for this is really a John Lee Hooker album, and one of his best in a long while.
Much of the credit goes to the Heat's planning and programming. They have caught Hooker in a variety of settings: soloist in his own characteristic idiom; playing a fantastic series of duets with the late Al Wilson; and fronting the entire band (minus Hite, who worked on the project, and spread his infectious good humor, from the control booth) for some righteous, raunchy boogie. Canned Heat have made no secret of the fact that their entire boogie series, spread over some three albums, draws its inspiration from Hooker's work, so the combination is a natural. The second album in this two-record set is given over to band numbers, and it's the best of the two.
Wilson's presence doesn't need to be overadvertised; he is very strong throughout, mostly in a very subtle way. Hooker has noted his admiration for Wilson several times, and their generation-spanning empathy is very evident here, especially on side two, which is given over mostly to Hooker with Wilson's harp and piano. Hooker remarks. "I don't know how that boy keeps up with me." It's no easy trick, keeping up with John Lee, but that's just what Alan does, laying down some amazing playing, especially on harp, in the process.

Vestine, who had recently rejoined the band when these sides were cut, is also very strong, even though he like Wilson is subservient to Hooker's thing. Henry once told an interviewer his greatest ambition was to record with John Lee Hooker and with Albert Ayler. With the release of Ayler's Music Is The Healing Force Of The Universe, and Hooker 'N Heat, Henry has fulfilled his ambitions at a very young age; there's no place for him to go but up.

Mention should be made of the earth-moving power of Antonio de la Barreda and Adolfo de la Parra. the Heat's south-of-the-border rhythm section, and of the engineering, which may still be a little too clean for Hooker, but then, nobody records in barns anymore. Hooker fans are going to dig this record, and so are Heat fans, and that includes a lot of people. Let 'em boogie!
by Bob Palmer 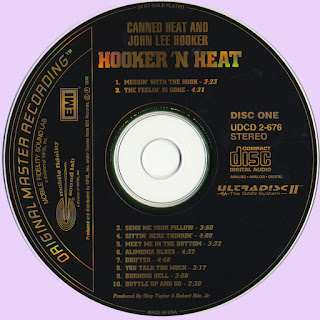 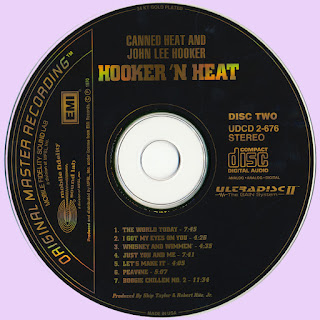 Other Canned Heat
1968  Livin' The Blues

Thanks for featuring this great album! John Lee Hooker and Canned Heat laid down the boogie like nobody else.

If you'd like to get more information on Alan "Blind Owl" Wilson, who supports Hooker so well here, I hope you'll check out my biography of him. It's at http://blindowlbio.com, and documents his early work with Delta blues legend Son House, his career with Canned Heat, his pioneering ecological activism, and his mysterious death at the age of 27 (just before Hendrix and Joplin passed away at the same age!).

I also recommend the family authorized tribute website at AlanWilsonCannedHeat.com. Lots of great resources there!

Thanks again for your great blog, and don't forget to boogie, as Bob Hite always said1

The files are corrupted.