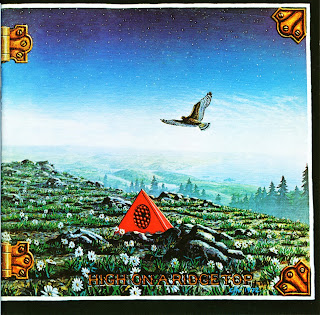 The striking Larry Heald painting spread across fie gatefold sleeve of the Youngbloods' 1972 album High On A Ridge Top depicts a panorama of the rugged west Warm outback with a raccoon in the foreground washing a red sphere he's extracted from a mysterious pyramid According to Banana, the band's keyboardist and guitar player, it signifies nothing more than: "If you leave a pyramid full of red balls outside, a raccoon will pull one out and wash it." A simple explanation serves |just as well for the final album by the Youngbloods—still a four-piece featuring singer/guitarist Jesse Colin Young, Banana. Joe Bauer on drums and bassist Michael Kane. It's a bunch of cool tunes the band has always loved. "We'd all grown up with these songs." says Banana. 'They were part of our soul."

"Speedo." a 1955 smash by the Cadillacs, is taken in true doo-wop a cappella fashion for the first couple of choruses until it busts loose with a rousing, full-band finale. Young's sunlit tenor gives Bob Dylan's "I Shall Be Released" its most emotional reading since the version by the Band's Richard Manuel. Lennon and McCartney's "She Came In Through The Bathroom Window" gives Banana a chance to flash his jazz-piano chops on an extended solo, while "Donna" and "La Bamba" are a natural one-two Ritchie Valens punch for Young, alternately breaking your heart and rocking like nobody's business.

A delightful album highlight is Banana's simmering rendition of "Going By The River." a Jimmy Reed classic. "I introduced all the kids at my grammar school in Santa Rosa to Little Richard, Chuck Berry. Fats Domino and Little Willie John," recalls Banana "When I was 13. I got into KWBR, the local R&B station with Rosco The Astronaut and Jumpin' George Oxford."

The Youngbloods were definitely beginning to run on fumes m 1972. "Jesse was starting to do gigs with the Jesse Colin Young Band," says Banana, "and he was writing songs for ;just his own band." One of the tunes Young had penned for Good And Dusty, a set-closing anthem called "Light Shine," admits Banana, "kinda stuck in my craw. Tunes he was writing of a preaching nature rubbed Joe and me the wrong way. When he suggested we do gigs with both the Youngbloods and the Jesse Colin Young Band, Joe and I both said, 'No. man, you can do gigs with your own band, but if we're gonna do Youngbloods gigs it's just gonna be Youngbloods gigs. And that pretty much spelled the end of it."

The finale for the Youngbloods came, appropriately enough, in Massachusetts. "We had decided that was gonna be it," says Banana. "It was at Wolf Trap, this huge festival, and there were 17,000 people there. The very next night was the first gig for the second coming of Banana & The Bunch, in this teeny little coffee house in the Berkshires in front of 18 people. Jesse also had a gig on the next night with his own band, probably with a crowd of 500 people." As all bands must, the Youngbloods had finally run their full course, but the enchanting music they created will forever reverberate from the hills of Marin—high on a ridge top.
by Jud Cost, Santa Clara, CA 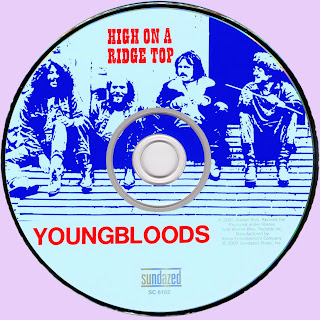 Free Text
the Free Text
Posted by Marios at 7:59 AM

Super band with greatful music. Thanks a lot, Cor & Marios!

many many thanks,for your generosity sharing your music, i was looking for on the road and light shine of jesse colin for years.

thanks a lot!!
kk

Outstanding performances of I Shall be released and Donna. I am an old brazilian hippie and a huge Youngbloods fan. Thanks a lot.