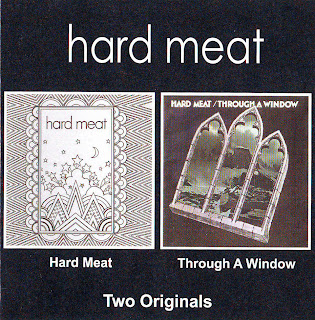 Both great albums from the UK psych/progressive rock band Hard Meat are combined here on one CD. Originally released in 1970 and 1971 the albums are very much in the early '70's UK underground counter cultural rock vein.The first album is a psychy heavy affair with some nice jamming and a great version of Dylan's "Most Likely You Go Your way and I'll Go Mine", whilst the second moves into more experimental areas with the addition of keyboards, flutes and purified guitar passages. Groovy, Trippy with a West Coast aura.

From "Through A Window" Sleeve Notes
“Many changes have developed since the first album and this, the second record, represents the middle of something that we started long ago. Pete Westbrook and Phil Jump joined in on flute and keyboard respectively. The band consists of Mick Dolan on six and twelve string acoustic guitars, six string electric guitar, harmonica and lead vocals; Steve Dolan on acoustic string bass, bass pedals, electric bass, acoustic guitars and vocals; Mick Carless on drums, castanets, congas and assorted loud noises.” 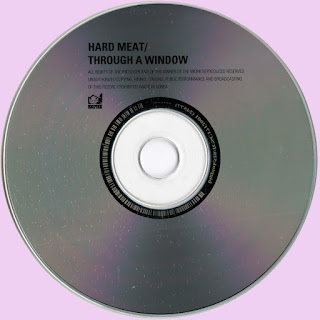 Never heard of these guys, but the song you posted sounds incredible! Definitley going to give this a DL. Thanks for sharing.

That word "acid" is something of a top drawer. Gotta have this. Many thanks Marios.

Hi LRRooster,
maybe you haven't complete the d/l,
check the links and file size, or if you used two different hosters, please rename the one file exactly as the other one.
Thank you.

I listend to Harf Meat when I was fifteen on a vinyl album that I nearlyt wore out and is now too scratchy to play. Thanks so much for posting this. The band was underrecognized at the time and I'm glad that there is interest in it again.

Although the FLAC file claimed it had a broken link and queried whether the password was incorrect, it downloaded and was able to be converted to MP3. More importantly, after looking for the 1970 album for 42 years (I received it as a station copy unavailable for sale), I am thrilled that it sounds as well, if not better, than I remember it. Thank you so much!!!!

Just discovered my tape of the BRMB session with Big Front Yard.
The session was recorded Saturday February 15th (presumably 1975) and broadcast with the interview 6 weeks later.
The Steve and Mick Dolan talking about the earlier days with Hard Meat. I'll try to put it up on YouTube.

Ever in my collection, great classic albums,to be possess. Thanks Marios!.

What a wonderful review and great comments.
Hard meat were indeed fantastic and it hasn't aged one bit.

Sadly Mick Dolan has recently passed away and it was through research into his musical achievements we came across this review.

Does anyone else have any reviews, photos, blogs that they would like to share with us? We are putting together all his achievements so anything you can help with will be greatly appreciated.

Sorry Marios,another links dead.Please re-up when you have time.
Thanks.

Thank you for sharing these superb albums for further enjoyment.

This is great music.

I landed in Germany in early 1971. First thing I did was buy a stereo at a German audio store. Since my music had not arrived from the states yet, I was looking for some music to play. The Kaserne (can't remember if that's how it was spelled) I was in had a little bitty PX and the only album they had for sale was Through a Window. I played it on my new stereo and have been listening to them since. I lost the album in the late 70s so lost touch with it. In the 90s I discovered a seller who had both albums on one CD. Bought it and am so glad to have them back in my life. I didn't care too much for the "Hard Meat" album. My favorite is 'Through a Window'. I am the only one in my family that can stand to listen to it. Their loss.

Thanks PapaRick!
We held a memorial concert for Mick last month and there is a Facebook page where you can see photos and other bits, including connections with a whole range of people he worked with, please join the fun - https://www.facebook.com/mickdolanmemorial.gig

Is it possible to re-up this please?
Thanks!