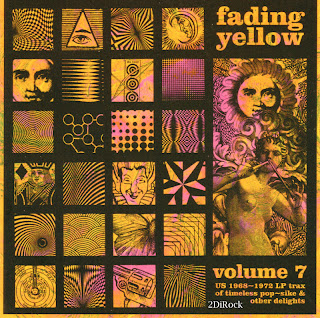 Fading Yellow Vol. 7 brings things back to these shores after a number of cds spent in the UK and I have to say that this is my favorite volume yet. It helps having some favorites of mine like The Gordian Knot, The Glitterhouse, The Peppermint Trolley Co., The New Wave, The Smoke, and Alzo. All of these are groups that put out albums that still remain unissued on cd (or in some cases obscure and expensive Japanese imports on cd - or internet bootleg cds)

All in all, I have to say that Fading Yellow Vol. 7 is my favorite of the bunch thanks to a sampling of obscure album tracks. The fact that this volume emphasizes bands that went so far as to make albums (rather than the 45s like many of the other groups compiled on previous Vols) ratchets the quality up on this volume.

Fading Yellow Vol. 7 starts out with The Eight Day's Building With A Steeple which is from an album co-produced and co-written by Ronnie Dante and arranged by Artie Butler in 1967 on Kapp. I'd always been curious to hear The Eight Day and they have that awesome sound that combines The Mamas and Papas vocals with a spiritual sound about going to church (sort of like in California Dreamin').

Del Shannon produced and co-wrote the wonder that is On The East Side by the pop teen idol Brian Hyland in 1970 on Uni which sounds a lot like Del Shannon's work from 1968's The Further Adventures of Charles Westover.

The Gordian Knot's Carraway Stream is a vastly under-rated piece of Beach Boys inspired pop with delicate harpsichord and Arbors' meets Simon and Garfunkel like harmonies from this album track. The group were featured on the album cover for their album Tones all tied up in rope. Somehow this group has been overlooked through the years. The Year Of The Sun by The Gordian Knot is also included here and is a gorgeus sun-soaked pop nugget with soaring flutes and harmony vocals.

Federal Duck's Peace In My Mind has a similar sound to that found on Freeborne's Peak Impressions album which has been reissued on the Distortions label. The group's name was derived from the Federal Duck Stamp Program which was enacted in 1934 by conservationist Jay "Ding" Darling and President Franklin D. Roosevelt. George Stavis (who also had an album on Vanguard) from Federal Duck later formed the Santa Cruz blue-grass rock jam band cicra 1970-73.

I wrote about the Glitterhouse extensively in my gullbuy Barbarella review. The liner notes here are misinformed stating that this group were probably a studio group for Bob Crewe. This Bob Crewe website has a lot of information (and a cd you can buy) which sets the record straight. Along with helping record the Barbarella soundtrack the boys in the Glitterhouse also released one lp (along with various singles under other names) with side one veering more towards the psychedelic arena of bands like Procol Harum or Quicksilver Messenger Service, with songs like Tinkerbell's Mind (the track included here) and its crazy psych lyrics

Tinkerbell's mind is a crazy machine at the best, and her headset's a flame, all the things her body loves the best...a pronounced organ and fuzz guitar sound, and harmony vocals galore.

The Peppermint Trolley Co.'s Pat's Song is one of the more mellow and introspective tracks from an excellent album riddled with some other goodies like their version of the Paul Williams/Roger Nichols Trust. This track reminds me of work on Paul Parrish's The Forest of My Mind album.

3's A Crowd album Christopher's Movie Matinee was produced by Mama Cass and Steve Barri for Dunhill in 1968. I Don/t Wanna Drive You Away has that Mamas and Papas styled harmony and cool Beatlesque strummed guitar lines.

Lee Michaels' My Friends is a druggy inspired pop nugget which was recorded for his A&M solo album Carnival of Life in 1968. This tune can also be found on the cd Best of Lee Michaels on One Way Records from 1997 which compiled tracks from his 6 A&M albums from 1968-72. This track (and the album it's from) was produced by Larry Marks (producer for Tape From California by Phil Ochs, American Dream by Emitt Rhodes, Cowboy in Sweden by Lee Hazlewood, Painted Dayglow Smile and Distant Shores by Chad & Jeremy, and work by the Flying Burrito Brothers and Dillard & Clark) features the excellent guitarist Hamilton W. Watt but is predominately filled with psyhedelic keyboard and eletric piano work. Sadly, Lee Michaels suffered from tinnitus so he left the music business and now lives in Hawaii.

Alzo released a handful of wonderful gems from the late 1960s and early 1970s including work with Jeff Barry as The Keepers of Light, as the singing duo Alzo & Udine and solo for Bell in the early 1970s. You/re Gone is a mystical tune from Alzo's solo album Looking For You which is all the more haunting since Alzo's passing in Feburary, 2004. Alzo had a knack for writing songs that seem to read your mind with a contemporary soul rhythm style that makes is melodies dance in your mind. He will be sorely missed by me. Vastly underated at the time and disenchanted with the music industry in the mid-1970s, Alzo disappeared before his rediscovery in recent years by a huge Japanese fanbase and the few faithful stateside.

The Cowsills were the real-life inspiration behind The Partridge Family, but their story has never really been told. It was awesome to see them sing the national anthem at a Red Sox playoff game this past fall and it remains a mystery of life why their work is still so hard to find. Mystery Of Life is from their On My Side album from 1971.

Produced by David Brigg's (the producer who worked with Neil Young on many albums, on Spirit's Twelve Dream of Dr. Sardonicus, as well as with Nick Cave & the Bad Seeds and Royal Trux before his death in 1995) for Bill Cosby's Tetragrammaton Records in 1968, Friday Morning Paper from Summerhill's sole lp is that mix of psychedelia and the Neil Young sound that I think Buffalo Springfield never really reached for but should have tried.

Bob Ray sounds just like Donovan on (Girl With The) Cameo Ring, a track taken from his Initiation of a Mystic which was released on Johnny River's Soul City label in 1969.

The New Wave were really a couple of kids named Tommy Andre and Reid King who released a wonderful bossa inspired folk rock album on the Canterbury label (the label that also put out the Yellow Balloon album) and Little Dream is one of the highlights from this album. Little is known about these two guys.

The North Wind Blew South is the title track from Philamore Lincoln's (from the UK) solo album released in the US on Epic in 1970 which featured a post Jeff Beck Yardbirds for backing. Not sure how much they appear on this soft Paul Simon inspired dreamer which wofts by in a orchestrated haze.

National Gallery's Diana In The Autumn Wind is from a concept album oddity called The Interpretions Of The Paintings Of Paul Klee. Featuring one female solo vocalist and some male vocalists. This oddity involved Charles Mangione who later recorded jazz versions of some of the tunes from this album on his own Diana In The Autumn Wind album. You can hear samplings from the National Gallery album (as well as see the sleeve art) at Frank's Vinyl Museum - it's farout and pretensious - sort of like a folk/psych version of Stereolab and it reminds me of the early 70s group Design.

The Smoke released an incredible Beatles' inspired album here in the US that was co-produced by Michael Lloyd and Kim Fowley. Similar to Michael Lloyd's other production for October Country, Gold Is The Colour Of Love is a Lucy in the Sky with Diamonds sound-a-like. It's a crime this awesome album is still not available on cd.
by Patrick  (Gullbuy) 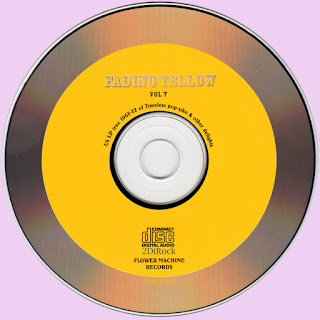 Free Text
Just Paste
Posted by Marios at 2:30 AM

Good volume ! Thanks very much...

Thanks for all the great music. Because of wonderful people like you the music of the psychedelic/counter culture is being kept alive for new generations. The same goes for the gang at Phrock. For some reason I can't leave commets there but I really love that blog.

Great compilation,many thanks!
Do you happen to have vol.3?

This is my favorite volume of first 10 volumes (never had a chance to listen to vols 11 & 12).
Thanks a million for the lossless rip Marios.

Thank you Marios. This looks amazing. Do you have any of the other volumes?

Thanks Marios.
If anyone wants to see a performance of one of the songs on this comp I uploaded 3's A Crowd - I Don't Want To Drive You Away from the Let's Go TV show (1968) on YouTube.

This album had a track by the Glitterhouse, a band that also put out a record:
https://www.discogs.com/The-Glitterhouse-Color-Blind/release/9635364

I wonder if Marios has it -- or can get ahold of it and post it (preferably FLAC)...

Whiskey, I have a vinyl copy of Glitterhouse - Color Blind, if you're interesting.

please re up marios