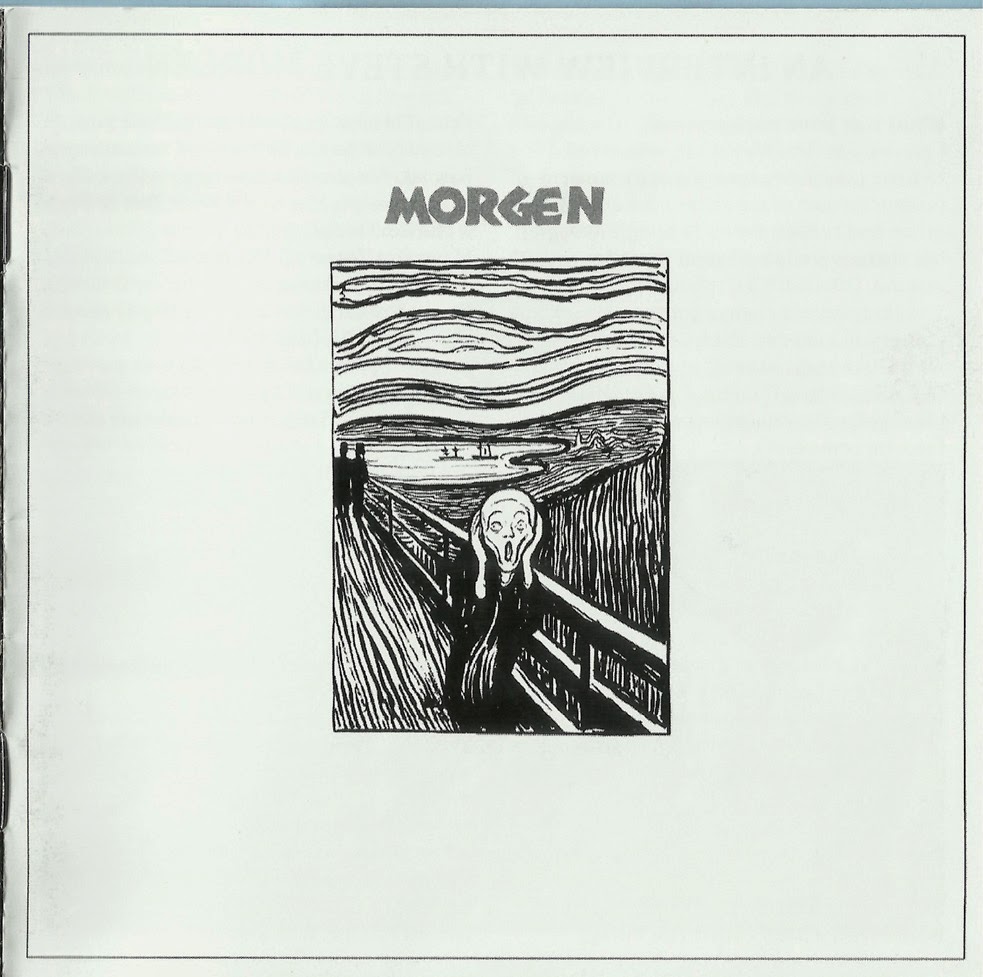 The album’s best known track is the classic “Welcome To The Void.”  40+ years later this cut’s over the top acid guitar work and pounding drums still shred the best of speakers.  Certainly a unique mixture of acid garage and hard rock, “Welcome To The Void” is essential listening.  There are other great cuts to be found on Morgen, like the stealth rocker “Purple” and the freaky fuzz corker ”Of Dreams.”  “Eternity In Between,” probably influenced by the Who, is another excellent track that begins with ringing guitars and crashing drums.  This 5 minute song is nearly ruined by a two and a half minute drum solo.

Steve Morgen’s sexually charged lyrics and over the top vocals will irritate some listeners but that’s really a minor complaint as most of Morgen is full of great fuzz guitar solos and solid songs.  No beads or flowers for these guys, Morgen is straight up brooding hard rock psych.  A mini gem of a record that will reward patient listeners.
by Jason Nardelli 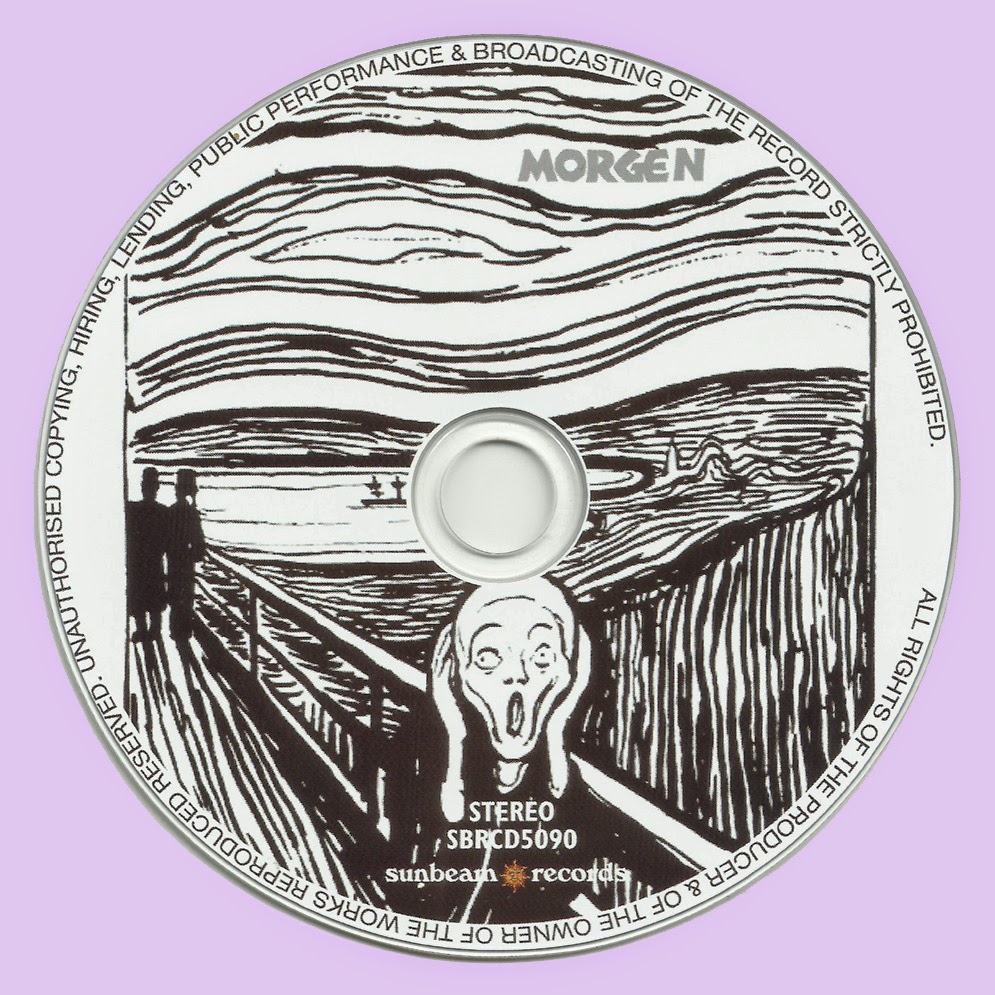 A bit of a forgotten band,I liked them!!!
Thanks for the reminder!
Cheers

I love this album so much!! It's haunting and beautiful and extremely underrated!

Thanks for posting in FLAC.

Excellent album. A top 10. A must hear for fans of hard psychedelic rock. So very sad this band did not continue recording.

This is an absolute treasure of an album! I recall finding a mint sealed copy for $1 USD at a thrift store outside Milwaukee, Wisconsin, USA. I had no idea what it was, I bought it just for the cover. Little did I know what secrets lied within! Oh, my!

After countless plays, assuredly accompanied by countless hits of acid, joints and bottles of wine, I still cannot be tired of the sheer power of poetry, animal magnetism and musical prowess of this LP. Nothing sounds like this LP, and never will. It will make blood cells dance, your bones and tendons buzz!

Steve Morgen and Group, I salute you.

-Morel Mike in Muscoda (I still live on & off on the Big Island, yeah)

Impressive rare album a killer gem.Many thanks for this new version with bonuses...

Thank you very much for this edition.

Super, wonderful!!! One of the best albums in the 60's. And also the bonus tracks!!! Crazy. Thank you, man!!! Marios you're the Greatest!

A bit of a forgotten band,I liked them!...Morgen - American group from New York City founded by guitarist and vocalist Steve Morgen, playing music from the borderline psychedelic heavy rock. Left behind an album originally released in 1969,primarily filled with sharp, sometimes even angry sound of guitars, vocals and garage of up to is notably, heavy drums and bass rhythms. The entire Band revolved around Steve Morgen, the Lead Singer and the only songwriter, it must be said though that Steve is not actually the best musician in the Band. The lyrics are quite weird and his singing is not bad but it is not fantastic either, even though it certainly has some energy in it, the Guitarists easily surpass him with their Fuzzed-out Guitars. I’m not saying that the Band or the Songs are bad, because they are obviously good and in some terms even excellent, there is consistency all throughout the Album and no weak-spots.

While they are no Hendrix, Morgen does a charming job with bang-on fuzzy guitars and drums. On ‘Eternity in Between’, a 5-minute track, the drum solo is powerhouse and actually do go on till eternity and give it a hard-rock-ish sound. Steve Morgen goes into a trippy seduction spree on ‘Beggin’ your pardon’ as he moans:
'I want to touch you/I want fill you with my fire/
I want to kiss your soul/I want to feel your breath on my/
C'mon girl, Let me ignite your spark/
I've got a natural desire/And I wanna get into your/heart/

The guitar work on the other tracks are spell-binding and will easily send true psychedelia fans into moments of druggy epiphanies. But the gem on the album is ‘Of Dreams’, Steve Morgen sounds like a different person all-together and the texture of the song is insanely soothing with beautiful reverb and feedback. It’s as Psy as it can get. The album ends with ‘Love’, a glorious 10-minute long magical journey into the 60′s blues rock.

Steve Morgen was a true psychedelic hero and this artifact proves it. It’s a trippy trip into the ’60s as you can imagine yourself wearing a tie-dye, jumping on a camper and swaying heads to the blues as the joint is passed around. This is an album which will rock any hippy party. What happened to Steve Morgen? What happened to the remaining members of the Band? I cannot say, no one seems to know what happened to them and what they did the rest of their lives, if they are alive or not, if they still perform or play music. It is unknown to me.

Equally captivating as the music is also a black-and-white cover, is a monochromatic reproduction of Norwegian symbolist painter, Edvard Munchs’ painting ‘The Scream’.

Thank you for this masterpiece, Marios!!!

thank you very much for this Marios

Any chance of a re-up?