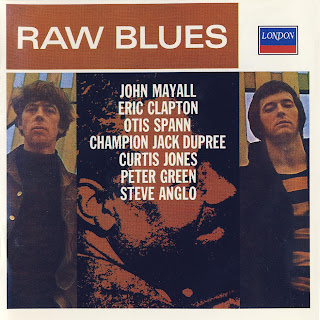 From this modest beginning Mike Vernon was eventually able to lure several 'name' Stateside blues men to 'The Supreme Record Company's' then head offices on London's Albert Embankment, for the purpose of inking a recording contract, and thereafter driving them to West Hampstead — Decca's studio complex. Simultaneously, his was the influence which convinced some of Britain's finest home-grown exponents of the genre to follow a similar course.

This package, aptly titled Raw Blues, was assembled by Mike and issued on Decca's subsidiary 'Ace Of Clubs' label in January 1967 (ACL (Mono)/SCL (Stereo) 1220). An intriguing collection of artifacts, its wetter of big name participants may now be appreciated through the sophisticated medium of sound which is a compact disc. The technology may be smoother these days, but the blues remain as raw as ever...

A few details about the contents and its protagonists wouldn't go amiss: Bom Jackson, Mississippi, on 21 st March 1930, Otis Spann shared his parents affections with two brothers and two sisters. Product of a musically inclined family, his father Frank Euston Spann played piano and mother Josephine was formerly a guitarist with Memphis Minnie, a top vocalist who knew a good picker when she heard one, having married another Jackson six-string resident, Joe McCoy (Kansas Joe). Mot surprisingly, Otis took to music like a duck to water, adopting piano as his chosen Instrument Largely self-taught, in later life he always acknowledged the influence Big Maceo Merriweather had upon his style. Gaining confidence as a result of forming a small band with some other local juveniles, when he heard about a neighbourhood talent competition happening at the Alamo Theatre he entered and won — as a singer — performing Coot Davis' Four O'clock Blues.

With the passing years he pursued medical studies at Jackson's Campbell College in the hope of becoming a doctor. When not buried in textbooks, he displayed a sporting prowess at boxing and football, briefly even turning professional at the latter. Between 1946 and '51 the U.S. Army called upon his time, but after discharge he relinquished all thoughts of any other occupation than music and moved to Chicago. The rest of the family had domiciled themselves there two years earlier, when mother died. Swiftly contacted by Muddy Waters, Otis joined the great guitarist/vocalist and stayed with his outfit for many years thereafter, although between 1952 and the time of this recording he'd also supplied studio accompaniment for such legends as Chuck Berry, Howlin' Wolf, Bo Diddley and Lowell Fulson.

Visiting Britain in May 1964 for a tour, our subject recorded an acclaimed Decca LP: The Blues Of Otis Spann (LK 4615). Included here are the four additional cuts from that London session of May 4th: Pretty Girls Everywhere (a), My Home In The Desert and the McKinley Morganfield (alias Muddy Waters) duo Country Boy and You're Gonna Need My Help. Personnel: Otis Spann (Vocal, Piano); 'Brother' (Guitar); Ransom K nowli ng (Bass); Little Willie Smith (Drums); add Eric Clapton (Gtr.) on (a) only. Further south in New Orleans, seaport metropolis of Louisiana, on Independence Day 1910, was bom William Thomas 'Champion Jack' Dupree. His father was French, while mother was a descendant of the Cherokee Indian tribe.

Tragically, both were killed when the family home burnt down during his seventh year. After spending the next seven cooped up in an institution he ran away, but not before he'd mastered the basics of singing and playing piano. Thereafter he maintained his existence by thumping the untuned pianos of seedy dubs and houses of ill-repute, acquiring the technique known as' Barrelhouse' playing thanks to prominent exponent of the art Willie Hall, otherwise billed as Drive 'em Down.

The Depression found our subject attempting to make ends meet by taking up boxing—whence 'Champion Jack' — but by the mid-Thirties he'd joined forces with Cotton Club keyboarder Leroy Carr. Upon the tatter's early death Jack was offered the unfortunate vacancy, which he accepted. In 1940 the Okeh label added him to their roster; it was the first of a multitude of labels great and small to do so over the next thirty years, including King — where he notched a big hit on the R ' n' B charts, Walkingthe Blues, in 1955-and Atlantic.

As blues music gained European popularity through the Fifties, many big names were lured from America to tour and occasionally record as a bonus. Big Bill Broonzy was instrumental in persuading Dupree to take the plunge, and he liked it so much that by 1960 he'd married an English giri half his age and settled in Zurich, Switzerland.  From here he was able to commute around Europe, finding appreciative audiences for his set which at that time still included some dance routines — early in his career he'd worked in vaudeville performing the tap variety.

By 1965 he was living in and working out of Denmark's capital, and the following February Mike Vernon signed him to a three album deal for Decca. The first of these, From New Orleans To Chicago (LK 4747), hit the shops in April, and included here are the two tracks from those sessions which were omitted through lack of space: Calcutta Blues (a) and the Eddie Boyd penned 24 Hours. Backed by an all-star British group, Now deservedly billed as 'The Father Of British Blues', John Mayall is rightly predominant on this collection. As one of the handful of pioneers responsible for popularizing the style in the U.K., his contribution cannot be overstated.

The Bluesbreakers became a veritable 'nursery' for so many future stars in their formative years, and amongst the home grown contingent on display here are some of the finest. Of his two solo billings, the impassioned Burn Out Your Blind Eyes and Milkman Strut, this second title prevailed, according to Vernon's original album sleeve note, when the daily delivery to the studios saw the dairy employee wander in midway through a 'take', deposit his crate, and nonchalantly walk out slamming the door behind him...

Of John's pairing with organist Steve Anglo, it may now be revealed that for Anglo read Winwood. Owing to contractual obligations elsewhere he could not appear under his true identity when the album was published. Rhythm section duties on Long Night belonged to then Bluesbreakers' members John McVie (Bass) and drummer Aynsley Dunbar.

The Mayall and Clapton liaisons here, John's Lonely Years and Eric's instrumental Bernard Jenkins, were cut at Mike's instigation and originally issued as a back-to-back limited edition 45 on his own Purdah label. Dating from the period between the players' joint collaborations under contract to firstly Andrew Oldhams Immediate company and then Decca, (Bluesbreakers era), both were committed through a single microphone in the middle of the capital's Wessex Studios in Soho, hence the unusual sound.

At the time of its taping, Peter Green had recently been recruited to the Mayall ranks as Eric's axe wielding replacement. On his own composition, Evil Woman Blues, he displayed a mature prowess at both playing and singing despite his relative lack of experience. In time, of course, he formed Fleetwood Mac, but that's another story... Legendary purveyors of the blues from both sides of the Atlantic are gathered together in this one historical little collocation. We all owe grateful thanks to Mike Vernon for making it possible. Why wait? Just play on...
by John Tracy, London, 1987 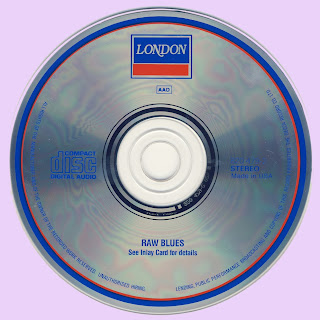 Free Text
Text Host
Posted by Marios at 12:34 AM

This is a great compilation. Nice to see it from a minty CD. Thanks for sharing :-)

Do you know of the Decca compilation that was released around this time (perhaps a bit later) called The World Of Blues Power Volume 2 (better than volume 1 i believe)?

An incredible comp that throws in bands like Ten Years After and Savoy Brown into the mix...as well as a couple of Eddie Boyd monsters!

Would be great to hear that one again if possible.

Never knew this existed. Thanks very much!

Great album full of rarities (now available on various CD as bonus tracks), but it's good to listen to the original sequence.
The vinyl is part of my collection in good company with other gems such as "Champion Jack Dupree - From New Orleans To Chicago", "John Mayall With Paul Batterfield" (EP), Blue Horizon's Various Artists "In Our Own Way... Oldies But Goodies", etc., thanks Larry & Marios.

I have also rips of the Super Duper Blues and In our own ways ... oldies but goodies (both on Blue Horizon) if anyone's interested, drop me a line on my blog.